Virginia and New Jersey Swing Towards Republicans – What Does this Mean for Arizona?

Voters in two east coast states that haven’t been characterized as presidential battlegrounds for a number of presidential elections gave everyone meaningful insight last Tuesday as to what 2022 midterms will look like. Virginia and New Jersey both voted for Democratic President Joe Biden by double-digit margins in last year’s presidential election, but the Republican party enjoyed surprisingly strong showings in both states last week.

In Virginia’s gubernatorial race, voters elected Republican businessman Glenn Youngkin as the next governor of the commonwealth. Youngkin claimed victory over his Democratic opponent Terry McAuliffe, a former Virginia Governor who once served as the chairman of the Democratic National Committee. Republicans also managed to regain control of Virginia’s House of Delegates this election cycle.

Up the coast in New Jersey, Democratic Governor Phil Murphy was re-elected to a second term in a race that was much closer than what was anticipated: Murphy held a comfortable lead in polling with approval numbers higher than those of the President. Democrats also suffered losses in the state legislature, as they did in Virginia.

These results were perhaps a clear wake-up call for Democrats ahead of next year's midterm elections. If these results are any indication, President Biden and his Democratic allies in Congress appear to be heading for the dreaded 'midterm curse,' when the minority party makes gains in Congress, state legislatures, and other down-ballot elections. In the 19 midterm elections that have occurred since the end of World War II, the President's party has lost seats in the US Representatives 17 times (see this trend visualized below, by FiveThirtyEight). 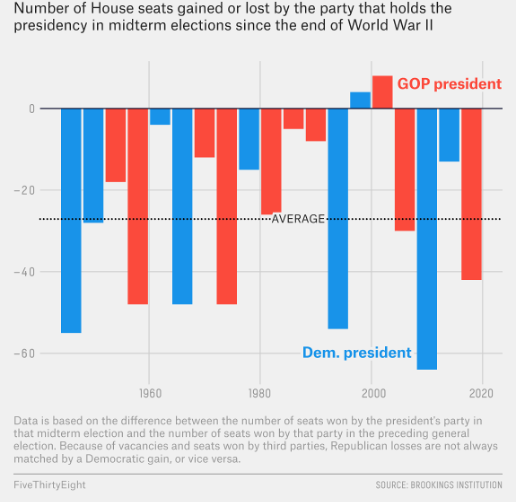 What Does This Mean for Arizona?

Neither Virginia nor New Jersey are key swing states at the national level, so what exactly do these results entail for Arizona – one of the nation's most crucial battleground states and home to the closest election in 2020 (the 10,457-vote difference between Joe Biden and Donald Trump in Arizona was the narrowest gap of any state in the 2020 presidential election)? One thing we can predict from the outcomes of Virginia and New Jersey's recent elections is that next year's midterms will largely take shape based on President Biden's popularity. It's not a mystery why Republicans did so well in last week's elections with President Biden facing his lowest approval ratings since taking office. If Biden continues sinking underwater as voters head to the polls next year, there's no question that his party will face repercussions at the ballot box. Arizona has not been immune to Biden's nationwide polling slump, either. OH Predictive Insights' Arizona Public Opinion Pulse (AZPOP) has been tracking Joe Biden's favorability rating dating back to July of 2020. From its peak in March 2021 (+11%), Biden's net favorability has fallen 18 points tying an all-time low in September 2021 of -6%.

From a numbers perspective, it's not just last week's results that should be concerning to Democrats, but the underlying factors that led to those results. For example, both Donald Trump and Joe Biden's numbers in Virginia were underwater around the time of the elections; the group of voters who viewed both Trump and Biden unfavorably opted for Republican candidate Youngkin by a 2 to 1 margin. This appears to be a re-emerging trend from 2016 when Trump overwhelmingly won over the voters who viewed both him and Hillary Clinton unfavorably. If unsatisfied voters continue to sway for Republican candidates, the GOP is in a very good position for next year.

It is also clear from last week's races that Democrats still need to exercise efforts in rural areas to remain competitive statewide. In a state such as Arizona, where elections can come down to a few thousand votes, rural efforts could prove pivotal in next year's statewide races.

Consider this: Mohave County is the darkest red county in Arizona. In 2016, Trump won the county by just shy of 41,000 votes. Four years later, Trump increased his raw vote margin by about 13,000, winning Mohave County by nearly 54,000 – a victory larger than now-President Biden's win in Maricopa County, which was just over 45,000 votes. In the end, Biden won the state by about 11,000 votes.

Key Takeaway: If Biden had not received the support he did in Maricopa County, Mohave County alone likely could have been enough to put Trump over the top in 2020. 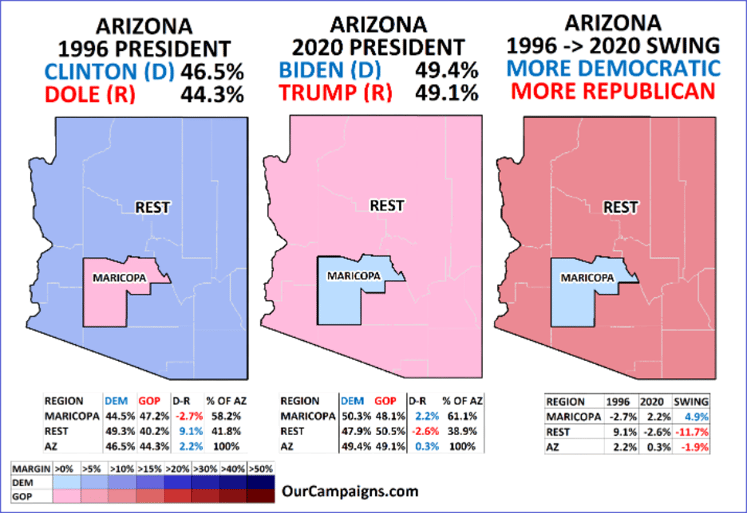 Emphasizing how important 'running up the score' in counties outside of Maricopa will be for Republicans in 2022, the coalitions in Arizona have changed quite drastically since the last time it voted Democratic for President: 1996. That year, President Bill Clinton won the state without carrying Maricopa. When combining the rest of the counties in Arizona, Clinton carried them by about nine percentage points, which was more than enough to offset his loss in Maricopa County. In 2020, the Democratic Presidential candidate also won Arizona, but this time via the opposite coalition; Biden won by carrying Maricopa County, despite losing the rest of the state by about 3 points. Trump was unable to turn out enough voters in the rest of the state to overcome Biden's lead in Maricopa, which accounted for more than three-fifths of the total votes cast.

While Arizonans know that Maricopa County has become crucial to Democratic statewide victories in Arizona, it is important to also understand that it is possible for Republicans to run up their margins in the state's rural counties to such a degree that it outweighs a potential loss in Maricopa County. Trump was unable to do this in 2020; however, as Virginia demonstrated last week, it is rural voters who are currently more energized to cast ballots. Whether or not this energy will carry over into 2022 or cross the border into the Grand Canyon State remains to be seen.

President Trump's involvement in next year's elections will also be worth watching. In an attempt to raise the support that Democrats had in 2018 and 2022, Democrats in Virginia tried to tie Youngkin's candidacy to Trump – even going so far as to call him "Trump in Khakis." At the same time, Youngkin worked to avoid public appearances with the former President to evade giving any fodder to Democratic attacks.

Trump is already playing an active role in the 2022 midterms – both in Arizona and elsewhere – and has endorsed several candidates for statewide office, including former news anchor Kari Lake and State Rep. Mark Finchem. However, as Youngkin effectively demonstrated in Virginia, Republican candidates do not need to fully embrace Trump in order to be successful. If anything, should Republican candidates continue distancing themselves from President Trump, the perception that he stands as the leader of the GOP may falter heading into future elections.