Midterm elections take place halfway through the President’s four-year term. Media personalities and political analysts usually view them as a referendum on the party in power, and for good reason: the President’s party has lost seats in Congress in every midterm election going all the way back to World War II.

With Democrats clinging to single-digit majorities and President Joe Biden facing record-low approval ratings, many believe that Republicans are in a strong position to make huge gains in this November’s elections.

In recent years, elections in swing states like Arizona have come down to one thing and one thing only: turnout. The party that does a better job turning out its voters will be the party that emerges victorious in marquee statewide and congressional races. Before we look ahead to this year’s elections, let’s go back in time and look at what previous midterm elections have told us about turnout. 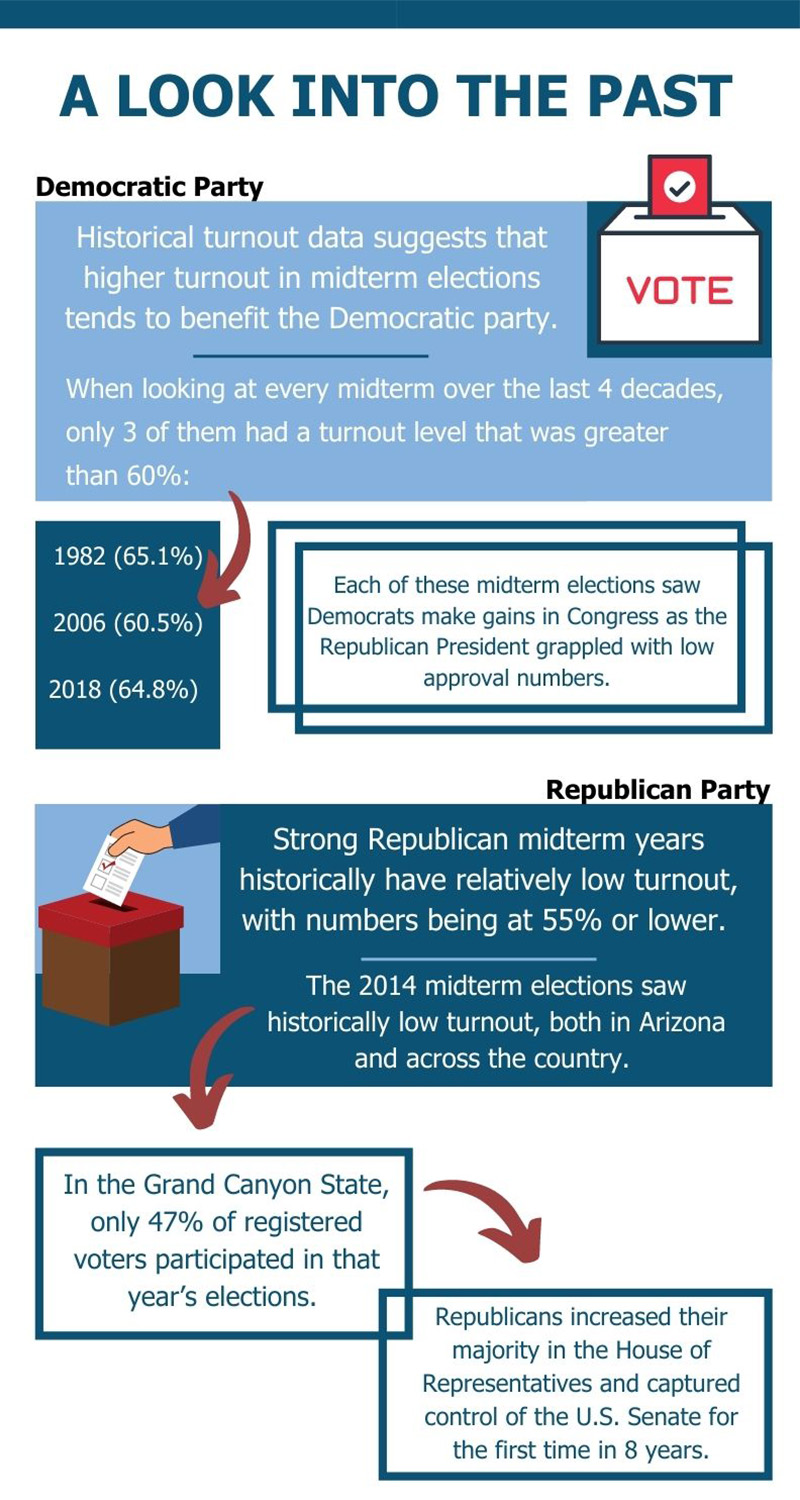 President George W. Bush, halfway through his second term in office, was facing historically low approval ratings as Americans grappled with economic uncertainty and the Bush administration faced questions about their military strategy in the middle east.

Democrats saw a huge opportunity to win majorities in both chambers of Congress. At that time, they had not done so since 1992 – the year Bill Clinton was elected President.

Sure enough, Democrats retook full control of Capitol Hill, gaining 31 seats in the House and 5 seats in the Senate. Two of those Democratic House gains were in Arizona. But for this example, we will only examine one of them.

In District 8, which was in the southeastern portion of the state, a state Senator named Gabrielle Giffords won a seat that was seen by many observers as an easy target for her party. She defeated GOP State Rep. Randy Graf with 54% of the vote to Graf’s 42% (in terms of raw votes, Giffords earned 137,655 and Graf earned 106,790), making Gabrielle Giffords the third woman in Arizona to be elected to U.S. Congress. Though many believed that she would face a tough fight for second term, she rode Barack Obama’s coattails to re-election in 2008.

In 2010, Giffords ran for her third and what would eventually end up being her final term. Democrats were facing a hostile environment amid the rise of the Tea Party and the unpopularity of President Obama’s healthcare overhaul, which critics began calling “Obamacare.”

Giffords’ Republican opponent that year was Jesse Kelly, an Iraq war veteran who was one of several Republican candidates to embrace the Tea Party. Giffords won re-election in a close race but received roughly the same number of votes as she did in 2006 – when she was first elected. She earned 138,280 votes, or 48.8% of the vote. Kelly earned 134,124 votes, or 47.3%. So Democratic turnout didn’t exactly take a nosedive in those four years. Republican turnout just skyrocketed, and it almost cost Giffords her re-election.

Giffords resigned from Congress in 2012 to focus on her recovery following an assassination attempt. A special election was held to fill her seat, which Democrats comfortably held.

With all of this in mind, let’s now look ahead to this November. Giffords’ husband, Sen. Mark Kelly, is set to face voters as he seeks a full six-year term. Arizona Democrats will also be defending as many as three competitive seats in the House.

After becoming the first Democrat to win Arizona since Bill Clinton, recent OHPI tracking surveys have found President Biden underwater by as many as 15 points in the state. Sen. Kelly also isn’t pulling away in his race. Many voters are still undecided and Independents once again are very much up for grabs.

Polling numbers suggest that 2022 will be a rebound year for Arizona Republicans. Keep in mind that just a few GOP victories here could tip the balance in Congress, as Republicans only need 5 seats to win back the House and just one seat to win back the Senate.

Every election, especially in an evenly divided state like Arizona, comes down to turnout. Whichever party does the best job turning out their base will be the party that emerges victorious in the end.

In the aftermath of the 2020 election, there has been somewhat of a greater focus on down-ballot offices. For better or for worse, many people are understanding how important some of these offices are, particularly when it comes to how elections are administered. Because voters are aware of the importance of these offices, the days of low-turnout midterm elections could be over – at least for the immediate future.

Given the history of midterm turnout, Democrats would be wise to lower their expectations for November. The highest-turnout midterm elections were all in strong Democratic years, and 2022 is shaping up to be anything but. If turnout is between 55% and 60%, Arizona’s top races could very much be up for grabs. But anything lower than 55% could indicate that Republican victories are on the horizon.

We don’t know how high the turnout will be, or exactly which voters will turn out to vote. But historical figures combined with the national environment suggest that Republicans have the wind at their backs.