Nevada Governor gets High Marks for COVID-19 and Economy

Poll Toplines and Crosstabs can be found here

PHOENIX (July 20th, 2021)- Almost 3 years into his first term, Steve Sisolak – Nevada’s first Democratic governor of the 21st century – is enjoying a positive image among a majority of Silver State voters, according to a new Nevada Public Opinion Pulse (NVPOP) survey conducted by OH Predictive Insights. Governor Sisolak is viewed favorably by half of the state’s electorate, while 39% hold a negative opinion of him.

OH Predictive Insights’ (OHPI) NVPOP is a statewide survey of Nevada residents providing regular updates on the moods, perceptions, and opinions of Nevadans on hot topics facing the state. This NVPOP was conducted July 6th – July 11th, 2021 and surveyed 783 Nevada registered voters giving the survey a margin of error of +/- 3.5%.

The survey found that Sisolak’s highest numbers were among Democrats – both liberal (81% favorable) and moderate (77%) – voters with a Bachelors’ degree (58%), and voters who get news from local TV at least a few times a week (57%). The second largest voting bloc in Nevada in terms of party registration – voters not affiliated with either major political party – hold a largely positive view of the governor. A plurality (46%) of these independent voters have a favorable opinion of Sisolak, while 40% have an unfavorable one. 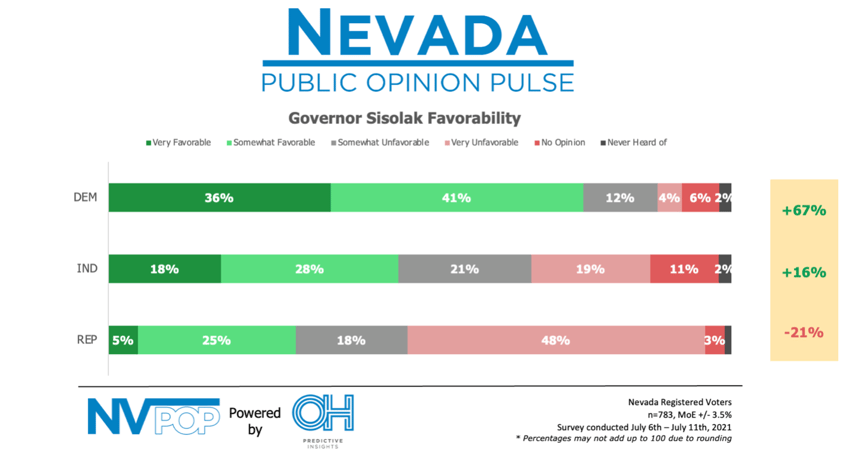 “For a Democrat in a perennial swing state that hadn’t elected a Democratic governor in the 24 years before him, Steve Sisolak is doing very well,” said OHPI Chief of Research Mike Noble. “His next challenge will be holding onto his high rating for the next 15 months until Election Day.”

When it comes to the top issues that the governor has been attempting to deal with this term, Sisolak gets high marks for the way he has handled the Coronavirus. Six in 10 Nevada voters – including 77% of Democrats, 61% of Independents, and even 38% of Republicans – approve of the way he has handled the COVID-19 pandemic. Voters who are more concerned about the pandemic rate the governor’s handling much more highly than those who are less concerned. Nearly three-quarters (71%) of those who are extremely or moderately concerned approve of his handling, while only 44% of those who are slightly or not at all concerned say the same.

The survey found that the next best issue for Governor Sisolak was the economy – 53% of voters approved of the way he was handling economic issues in the state while 38% disapproved. Even among voters who thought that jobs and the economy were the biggest issues facing Nevada, Sisolak performed strongly; the governor had a similar approval rating among these voters (54%) as he did statewide, however, his disapproval rating ticked up 4 points, to 42%. 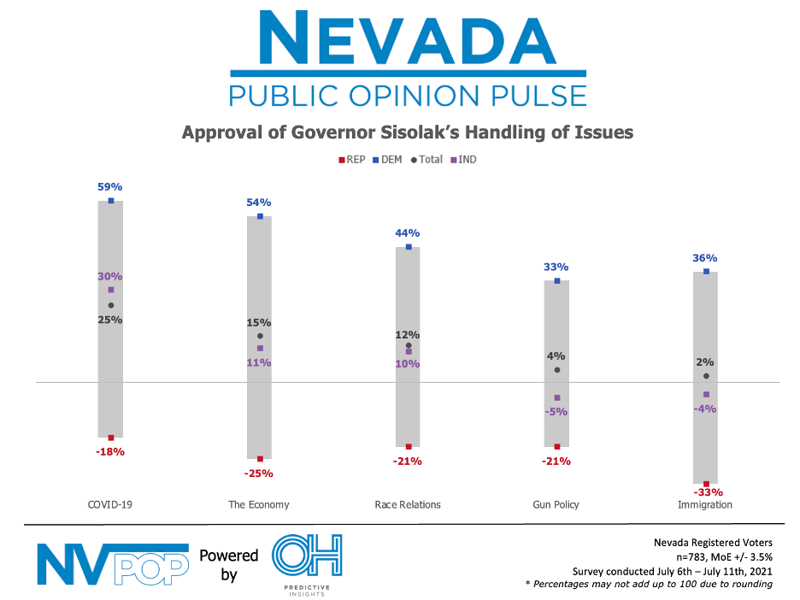 Governor Sisolak’s worst performance review came on the topic of immigration. Statistically equal shares of Nevada voters approved (41%) and disapproved (40%) of the way the governor has dealt with the immigration issue in the state. Opinion was sharply divided along party lines – by a larger than 2:1 margin, Republicans disapproved of Sisolak’s handling of immigration, though again by a larger than 2:1 margin, Democrats approved. On this issue, Independents were evenly divided with 37% approving of the handling and 41% disapproving.

On the two other issues that Nevada voters graded Sisolak – race relations and gun policy – he performed moderately well. Half (46%) of voters approved how the governor has handled race relations in the state, 33% disapproved. A slightly lower 41% approved of his handling of gun policy while 38% disagreed.

“Whether Governor Sisolak gets reelected will depend on which issues dominate the campaign,” says OHPI Data Analyst Jacob Joss. “If Sisolak can make the debate about COVID-19 or the economy, he could do well; however, if his opponents focus on immigration or gun policy, he could be a one-term Governor.”

Methodology: This poll was conducted as an online opt-in panel survey. The survey was completed by OH Predictive Insights from July 6th to July 11th, 2021, from a Nevada Registered Voter sample. The sample demographics were weighted to accurately reflect the Nevada Registered Voter Population by gender, region, age, party affiliation, ethnicity, and education. Population statistics were determined using a combination of data from the Nevada Secretary of State’s Office and the most recent Census data available. The sample size was 783 registered voters, with a MoE of ± 3.5%. Numbers may not equal 100% due to rounding.