PHOENIX (July 27th, 2022)- Gun control issues have been circling the media in recent months, dividing the public with varying stances on the issue. OH Predictive Insights (OHPI) conducted a survey to assess Arizona voters’ sentiment toward gun control laws. According to the latest Arizona Public Opinion Pulse (AZPOP) survey, 48% of Arizonans believe that stricter gun control would reduce the frequency of gun violence. 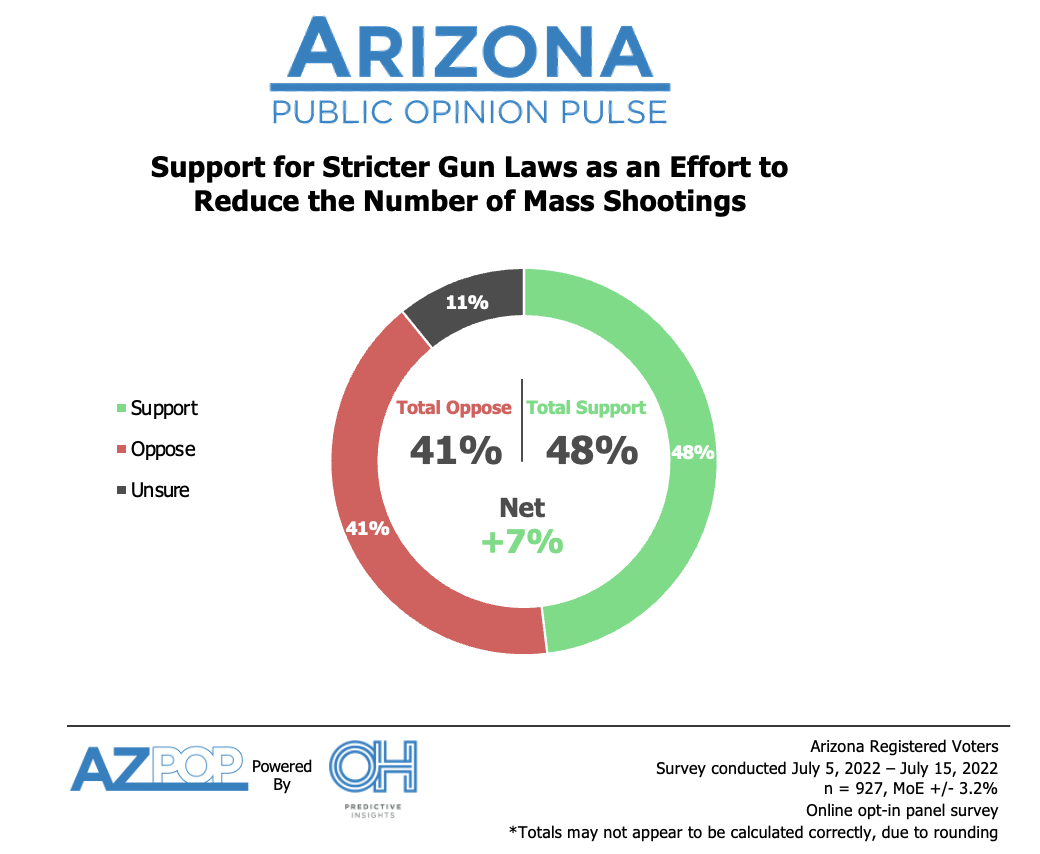 However, a large majority of Arizonans agree on steps that can be taken to reduce gun violence.

According to the new AZPOP survey, over 8 in 10 respondents (82%) believe that firearm purchasers should be subject to a criminal background check. A large majority of respondents (74%) also support increasing the minimum age to buy all firearms to 21 years old. This number increases to 77% when applied only to assault rifles and semi-automatic weapons. 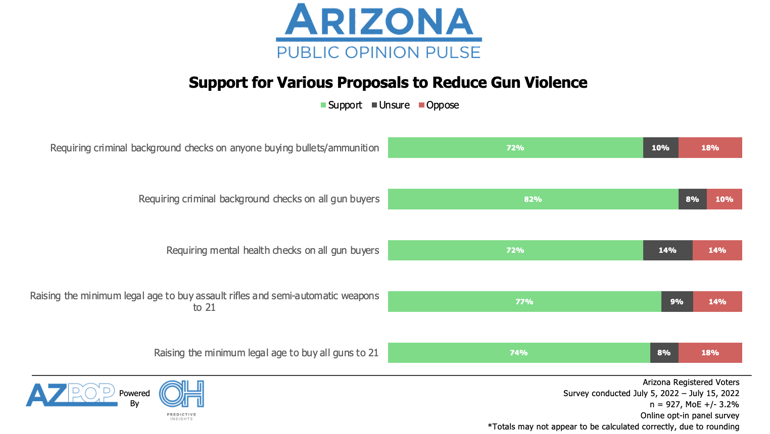 While more than half of Arizona voters (56%) support a ban on the purchase of assault rifles and semi-automatic weapons, some key electoral demographics are split on an outright ban.

Six in ten voters over the age of 65 support an assault weapons ban, and almost 7 in 10 (68%) support a ban on high-capacity magazines.

Six in ten Arizonans would back an increase in the number of armed guards or Student Resource Officers (SROs) in public schools. This number increases to 67% among respondents with children under the age of 18. When it comes to arming teachers, 42% support it while 39% oppose the idea – 19% of respondents are unsure.

“The data reinforces the polarizing nature of this strategy to reduce gun violence in schools, even in a gun-friendly state like Arizona,” said Noble.

“While Arizona is, and will continue to be, a gun-friendly state, it is likely that the seemingly constant stories of the most recent mass shootings are causing Arizonans to come together on several strategies seeking to prevent gun violence,” said Noble.

Methodology: This poll was conducted as an online opt-in panel survey. The survey was completed by OH Predictive Insights from July 5th to July 15th, 2022 from an Arizona Statewide Registered Voter sample. The sample demographics were weighted to accurately reflect the registered voter population by gender, region, age, party affiliation, and ethnicity according to a recent voter file derived from the Arizona Secretary of State’s Office and recent Census data. The sample size was 927 registered voters in Arizona, with an MoE of ± 3.22%. Numbers may not equal 100% due to rounding.