Yee is the only Candidate that Holds an Edge Over their Opponent, All Other Races in a Dead Heat

PHOENIX (October 17th, 2022)- Although cooler weather is making its return to the desert, most of Arizona’s down-ticket races are still stuck in a dead heat. OH Predictive Insights’ (OHPI) latest Arizona Public Opinion Pulse (AZPOP) reveals incumbent Republican Treasurer Kimberly Yee defends her seat with a statistically significant lead over her Democratic opponent, Martin Quezada (46%,35% respectively). As for the Secretary of State, Attorney General, and Superintendent of Public Instruction races, no candidate holds more than a 3-point lead over their opponent – all statistically tied.

According to the survey, Yee is the only candidate holding a strong lead over an opposing candidate among likely voters. Incumbent Republican Treasurer, Yee, gains an 11-point lead over Quezada. However, 2 in 10 voters are still undecided. 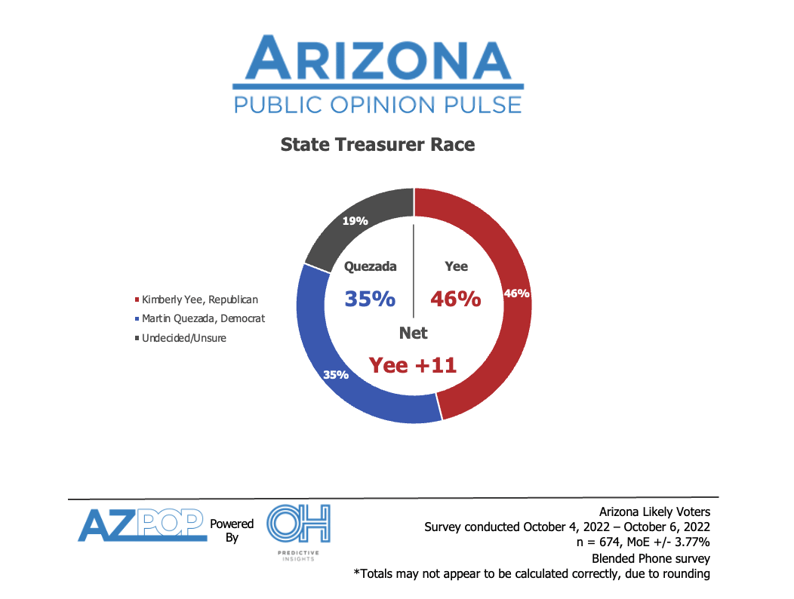 “The dynamic of the Treasurer’s race is interesting because it is the only OHPI-polled race in which the Republican candidate is an incumbent and not endorsed by Trump but still leads by double-digits,” said Mike Noble, OHPI Chief of Research. “This could potentially point to a lower electoral ceiling for candidates following in former President Trump’s model and/or the benefit of incumbency.”

Although Yee may not have had the Trump endorsement, she did not sacrifice a statistically meaningful amount of support among key demographics of the GOP base. In fact, Yee is performing better among men (+18), Rural County voters (+34), and voters without a college degree (+22) than any other GOP candidate in Arizona.

Yee benefits from her incumbency, but the large shares of undecideds in key voting blocs could impact support come Election Day, which Quezada will likely be relying on. Even so, Yee is in an enviable position among swing voting blocs that any Arizona candidate would covet, particularly Independents, Hispanic/Latinos, and Maricopa County voters. “In Arizona’s political climate this past year, we have seen some of these key voter blocs have a real impact on which way the election swings, and it is clearly no different for the Treasurer's race,” said Noble. “Each candidate has their reliable voters, but it is these all-important demographics – as well as the undecideds – who will make the final call come November.”

Except for the election for Arizona Treasurer (the only race on the ballot where an incumbent Republican is defending their seat), the same story can be told for all down-ticket races on the ballot this year: it’s going to be a dead heat. In the races for Attorney General, Secretary of State, and Superintendent of Public Instruction, no candidate possess larger than a 3-point lead over their opponent or higher than 43% support, and no race has less than 17% of undecided voters.

The key demographics for both Republicans and Democrats are keeping opposing sides in these three races at a standstill. Key voter blocs of the Democratic candidates (women, Pima County residents, and college-educated voters) and key voter blocs of the Republican candidates (men, Rural County residents, and non-college voters) are supporting their respective parties by similar margins.

Three of the key swing blocs of voters (Independents, Hispanic/Latinos, and Maricopa County voters) are, once again, narrowly split. In the Secretary of State and Superintendent of Public Instruction race, the Democratic candidates, Fontes and Hoffman, have a small lead in all three voter blocs. As for the Attorney General race, Hamadeh and Mayes are statistically tied among all three groups.

Trump-backed Mark Finchem leads within the margin over his Democratic opponent, Adrian Fontes (43%, 41% respectively). Since the September poll, the share of undecideds has decreased by 8 points, with more than half of them throwing their support behind Fontes. 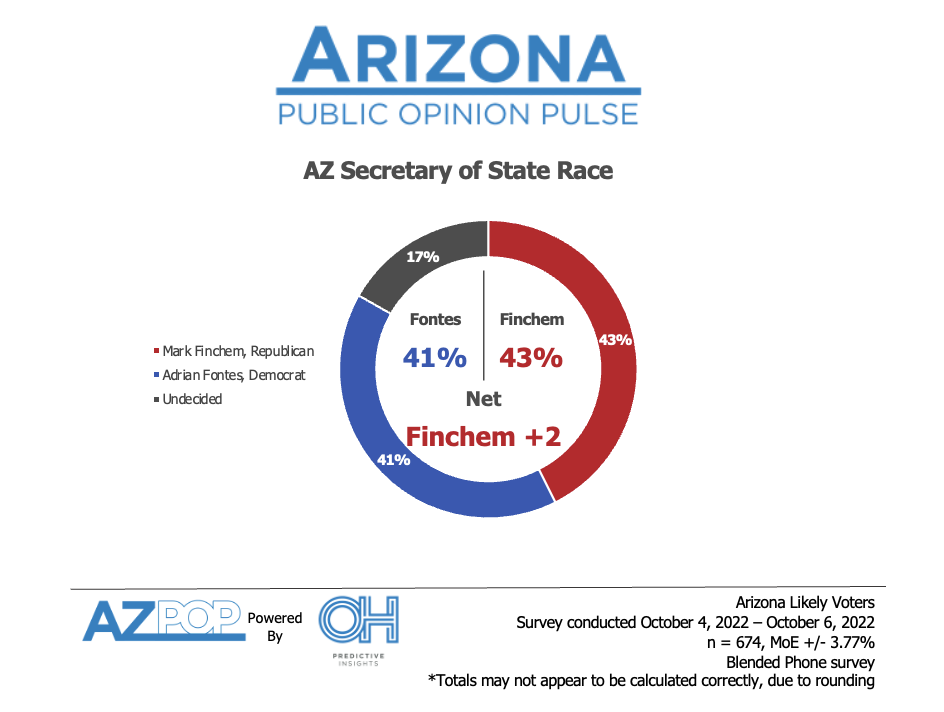 Trump-endorsed Abraham Hamadeh has a within-the-margin lead over Democratic candidate Kris Mayes (42% to 39%). One-fifth of voters are still undecided. 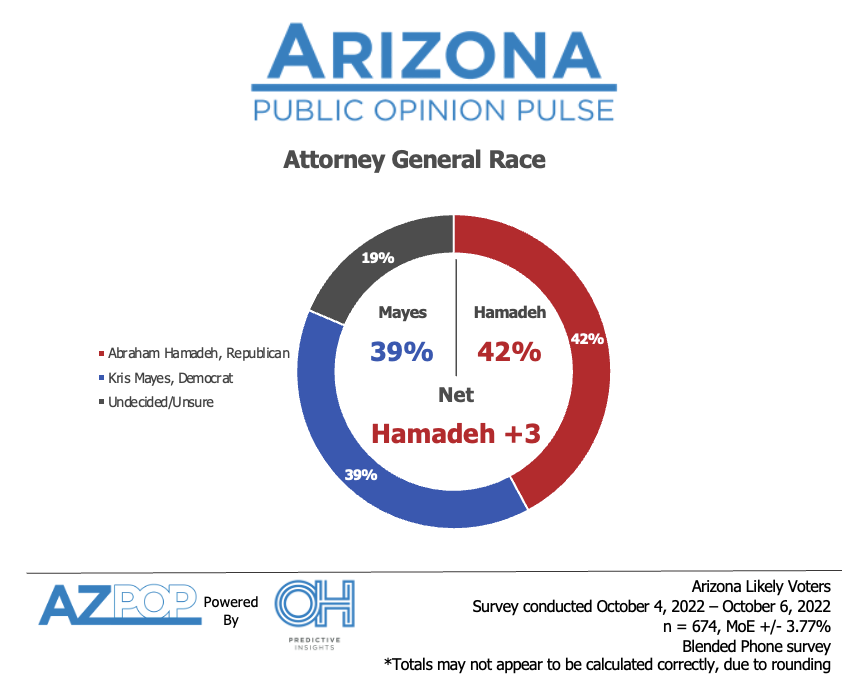 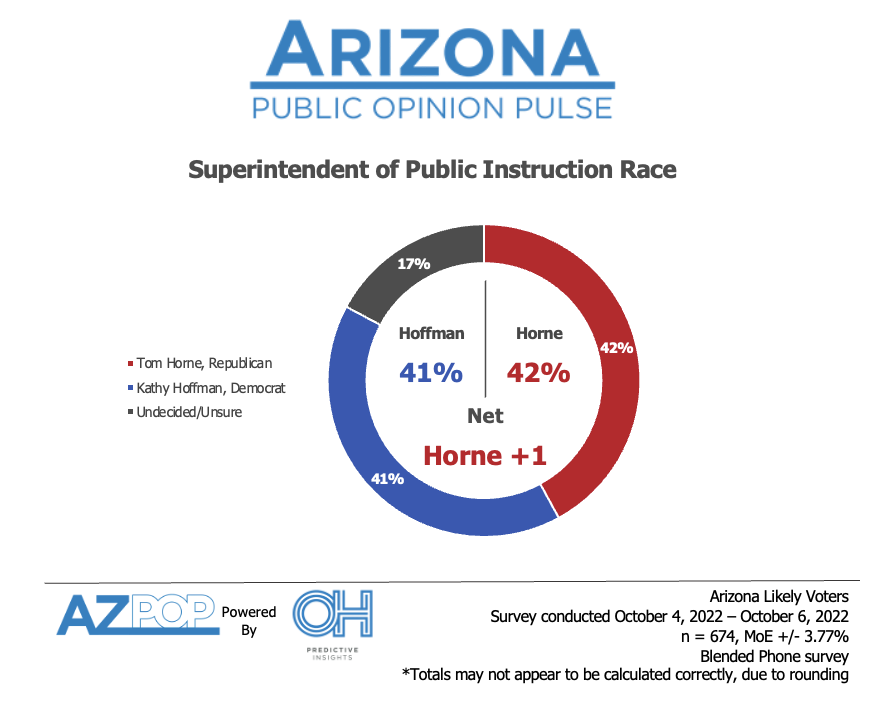 “With only a few weeks away from the General Election, the relative lack of differentiation between most of Arizona’s down-ticket races points to a hyper-polarized political environment where turning out your base and capturing those few undecided voters will make the difference between victory and defeat,“ said Noble.

Methodology: This poll was conducted as a Blended Phone survey utilizing Live Callers, Peer-to-Peer Text, and IVR. Respondent phone-type 60% cell and 40% landline.  The survey was completed by OH Predictive Insights from October 4th to October 6th, 2022, from an Arizona Likely General Election Voter sample. The sample demographics were weighted to accurately reflect gender, region, age, ethnicity, party affiliation, and education based on the most recent U.S. Census estimates and the most current Arizona Secretary of State voter file – the exact percentages can be found in the table below. The sample of 674 Likely Voters yielded a MoE of ± 3.77%. *Numbers may not equal 100% due to rounding.