Arizona Voter Sentiment Toward Abortion Does Not Align with Recent Ruling

Arizona Voter Sentiment Toward Abortion Does Not Align with Recent Ruling

This AZPOP was conducted September 6th – September 9th, 2022 and surveyed 829 Arizona registered voters, giving the survey a margin of error of +/- 3.4%.

OHPI began polling Arizona sentiment toward abortion in September 2021, and a year later, Arizonans’ opinion on abortion has not wavered. An overwhelming majority of Arizona voters want abortion to be legal in at least some cases (91%), leaving only 9% of those who believe there should be a total ban on abortion in the state. Over half of Democrats (58%) and 42% of Independents share the belief that abortion should be legal regardless of the circumstances, a notion that is also shared by a plurality of Hispanic/Latino voters (46%). 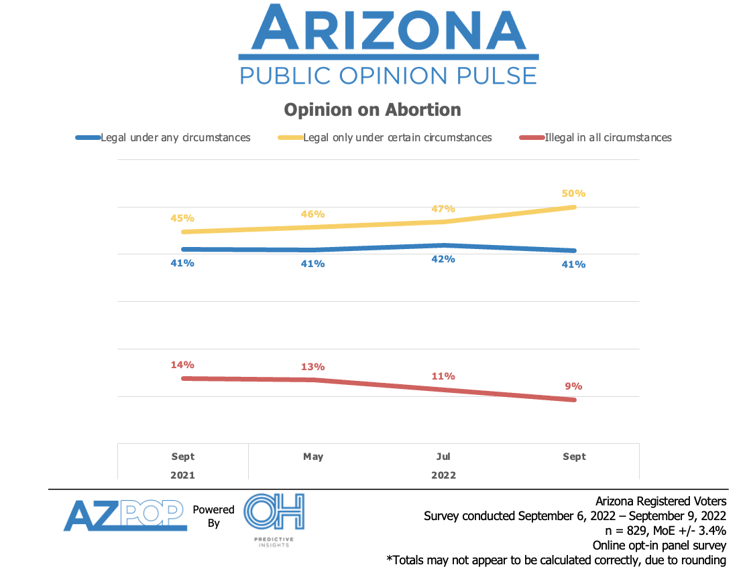 While 9 in 10 voters agree that abortion should be legal in at least some cases, a smaller share (64%) view it as an issue that would impact their decision as to whom to vote for; however, the impact is not equally shared across parties. Four in 5 of Democratic voters (81%) say a candidate’s stance on abortion is very/somewhat impactful to their voting decision, compared to 58% of Independents and only 1 in 5 Republican voters (18%).

A majority of younger voters aged 18-34 years old (76%) are likely to have their vote impacted by a candidate’s stance on abortion. However, this voting group historically is not one that usually turns out to vote in midterm elections.

One of the key groups impacted by a candidate’s stance on abortion is women, with almost 7 in 10 revealing they would be very/somewhat impacted (68%). The importance of abortion this year could be attributed to the voting strength of women, who – according to Rutgers – are registered to vote and turn out to vote at higher rates than men across the country.

“With the reinstatement of the Abortion Ban from 1864 that took effect recently, the data shows that sentiment on this issue among important voter blocks could likely be a deciding factor when they arrive at the ballot box this November,” said Mike Noble, OHPI Chief of Research.

Optimism for the trajectory of the Grand Canyon State is on a slight uptick. As inflationary pressures have decreased over the last few months, the percentage of voters who feel that the state is on the right track is 39%, up from 36% in July. While perceptions of Republicans remained relatively unchanged, the shift among Democrats (+4) and Independents (+5) made an impact on the net-positive view of Arizona’s trajectory. Among key demographics with an improved perception of the direction Arizona is headed were Hispanics (from 34% in July to 43% in September) and those in Rural counties (from 37% to 42%). When asked if voters believed the state’s economy was heading in the right direction, the latest survey found an 8-point margin between voters who believe it’s going in the wrong direction (56%) and those who say is it’s on the right path (44%).

For the first time since March of this year, Jobs/Economy (27%) and Immigration (26%) are once again tied for the most important issue facing Arizona. Education (12%) and Healthcare (10%) nearly tie for last place. This sentiment is driven in large part by Independents whose top issue was Jobs/Economy (34%) and a near-majority of Republicans (45%) who chose Immigration as their number one issue. For Democrats, Jobs/Economy (20%), Healthcare (18%), and Education (17%) were statistically equal in importance.

“As pocketbook pain points begin to decrease, voters’ priorities are shifting in reaction, it seems, to their respective party base’s typical concentrations,” said Noble. “Independents, however, may continue to surprise us as we get closer and closer to Election Day.”

These increases are likely due in large part to 78% of Arizona voters approving of the enactment of the President’s Student Relief Plan on August 24th, as well as a drop in gas prices at the pump. Biden has particularly regained footing with younger voters with a 16-point rise in approval from July among those 18-34 years old (38% to 59%), and a 6-point rise among those 35-44 years old (35% to 48%). Biden’s approval also improved among Hispanics, from 44% in July to 58% in September. 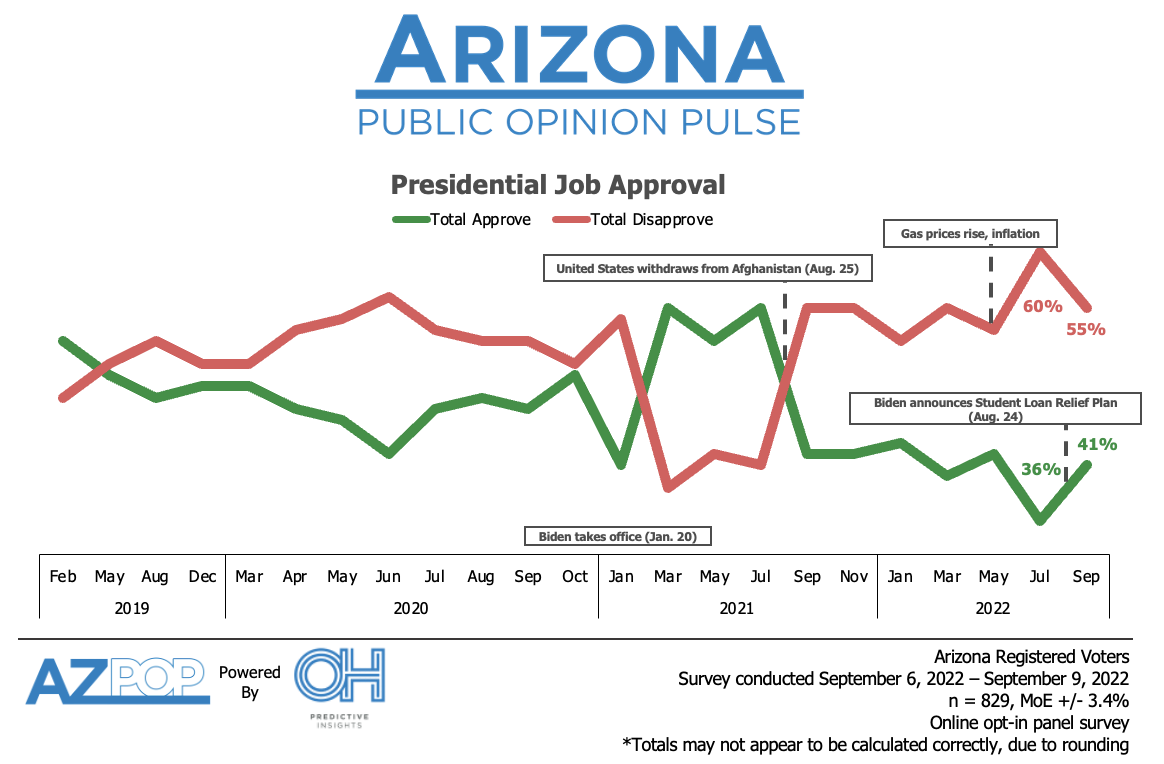 As seen throughout election history, the down-ticket effect Presidential approval has on its party can be extremely impactful when it comes to voting. The recent survey revealed a majority of those who do not approve of Biden are Not too/Not at all enthusiastic to vote in the upcoming election (67%). Among those who are Extremely/Moderately enthusiastic to vote, 54% disapprove of Biden and 44% approve.

“As we get closer and closer to Election Day, voter sentiment begins to turn encouragement for the GOP into a reality for the Democratic party,” said Noble. “As much as Biden has attempted to rise above water with voters, the impacts of his disapproval are likely to affect Republicans in November.”

In what is certain to be a nationally discussed election year, enthusiasm among Arizona voters is increasing following the August 2nd Primary election. More than 8 in 10 voters (82%) are at least somewhat enthusiastic to vote in the 2022 midterm elections, an 8% increase from the July AZPOP.

In February, Republicans held the edge on enthusiasm (75%) while Democrats trailed behind (66%). Seven months later, Democrats have gained the motivation they needed to now share an equal enthusiasm to vote with Republicans (87%). 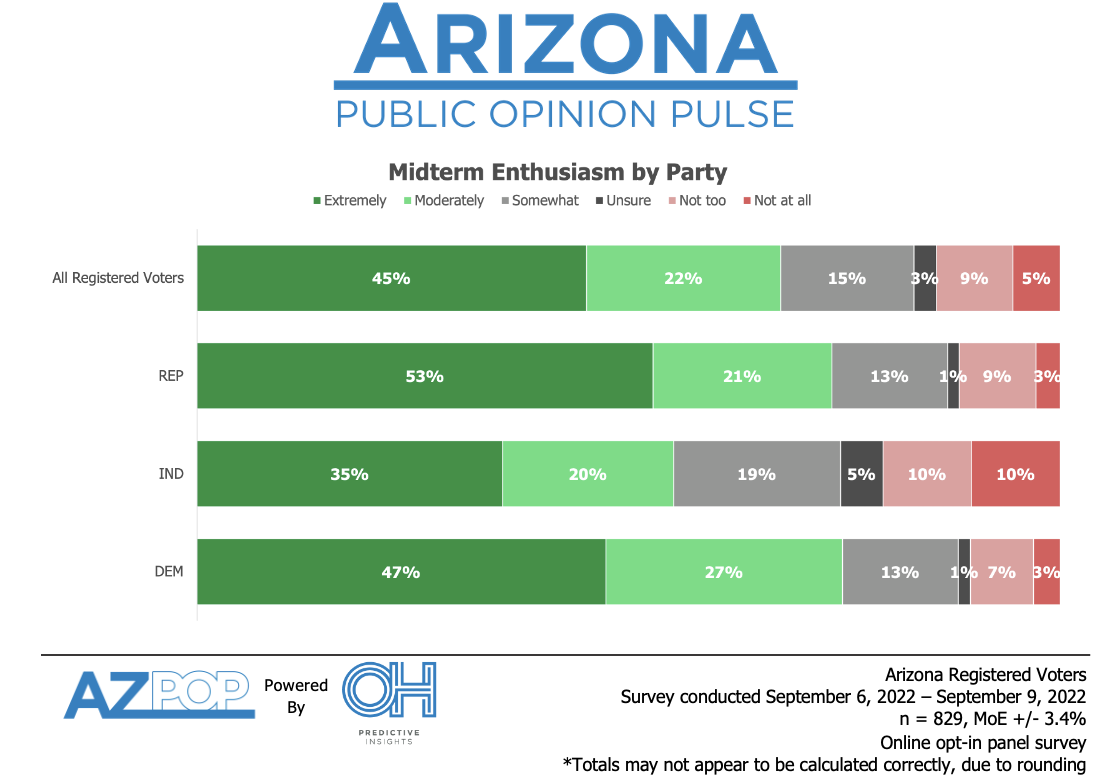 “Democratic hopes will be heavily contingent on younger, female, and perhaps Independent demographics showing up in droves for this election, especially those who are more likely to vote for candidates based on their stance on abortion,” said Noble.

Methodology: This poll was conducted as an online opt-in panel survey. The survey was completed by OH Predictive Insights from September 6th to September 9th, 2022 from an Arizona Statewide Registered Voter sample. The sample demographics were weighted to accurately reflect the likely voter population by gender, region, age, party affiliation, ethnicity, and education according to a recent voter file derived from the Arizona Secretary of State’s Office and recent Census data. The sample size was 829 registered voters in Arizona, with an MoE of ± 3.4%. Numbers may not equal 100% due to rounding.