New Top Issue in Arizona: Jobs and the Economy

PHOENIX (February 9th, 2022)- After hosting a razor-thin presidential and the most expensive Arizona elections in history (US Senate contest) two years ago, Arizona voters are gearing up to take part in more marquee elections this year. As November approaches, January’s Arizona Public Opinion Pulse (AZPOP) from OH Predictive Insights (OHPI) asked questions that help paint a high-level picture of Arizona’s political climate and voter sentiment as the 2022 midterms take shape.

The recent survey finds President Joe Biden underwater (-9 points) with Arizona voters, clocking in at 43% approval while 52% disapprove. These numbers mirror a similar decline in Biden’s ratings in other swing states ahead of midterms – a hurdle for Democrats on the ticket for these all-important midterm elections.

January’s AZPOP finds that the new year came with a new top issue for Arizona voters. For the first time since Q1 2021, immigration was not the number one issue; as of January 2022, jobs and the economy is leading the pack (29%), with immigration closely behind at 25%. Looking at the top issues for each party, Republicans mainly chose immigration as their top issue (45%), a plurality of Democrats chose health care (28%), and Independents are focused on jobs and the economy (32%).

“At this point in Biden’s presidency, Arizonans’ priorities are shifting in reaction, it seems, to the administration’s policy decisions,” said Mike Noble, OHPI Chief of Research. “The economy is becoming increasingly pertinent to voters as many blame the President’s economic policies for inflation issues, high gas prices, and supply chain challenges.”

In what is certain to be a nationally discussed election year, Arizona voters are paying the most attention to who will be the next “CEO of the State.” When asked to select the race(s) in Arizona’s 2022 elections they felt were the most interesting, voters were mainly curious about the Governor (67%) and US Senate (54%) races. No other races garnered majority attention.

Overall, 79% of Arizona voters are at least somewhat enthusiastic to vote in November’s elections, but Republicans currently hold the edge: three-quarters say they are extremely or moderately enthusiastic about this year’s midterm elections, compared to 66% of Democrats and 52% of Independents. 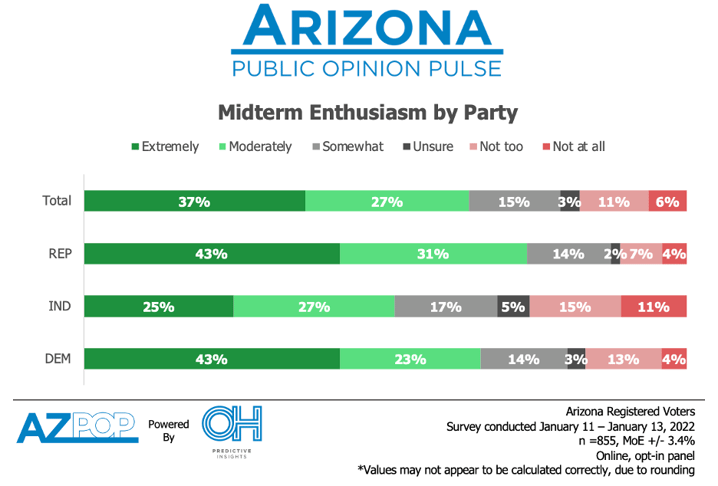 “It’s encouraging to see majority shares of each party enthused to cast a ballot in November. However, this far ahead of election day and in a battleground state like Arizona, these elections will ultimately come down to turnout – and currently, voter enthusiasm, top issues, and the president’s lagging job approval is creating a more pro-Republican political environment,” said Mike Noble.

Methodology: This poll was conducted as an online opt-in panel survey. The survey was completed by OH Predictive Insights from January 11 to January 13, 2022 from an Arizona Statewide Registered Voter sample. The sample demographics were weighted to accurately reflect the registered voter population by gender, region, age, party affiliation, ethnicity, and education according to a recent voter file derived from the Arizona Secretary of State’s Office and recent Census data. The sample size was 855 registered voters in Arizona, with a MoE of ± 3.4%. Numbers may not equal 100% due to rounding.