Arizonans are Split on Favorability of the Supreme Court

Arizonans are Split on Favorability of the Supreme Court


PHOENIX (August 1st, 2022)- The United States Supreme Court has made quite a few decisions in the recent month, yet some of these decisions are not agreed upon by everyone. OH Predictive Insights (OHPI) conducted a survey to assess Arizona voters’ sentiment toward the United States Supreme Court and its recent rulings, as well as voters’ preferences towards suggested reforms to the Supreme Court. According to the latest Arizona Public Opinion Pulse (AZPOP) survey, 43% of respondents view the Court favorably, while 45% view it unfavorably.

Favorability of the Supreme Court

According to the recent AZPOP survey, Arizonans are split on their views toward the United States Supreme Court. When looking at the overall favorability of the Supreme Court, opinions are split, however, the intensity is much stronger among those who are unfavorable compared to those who are favorable. 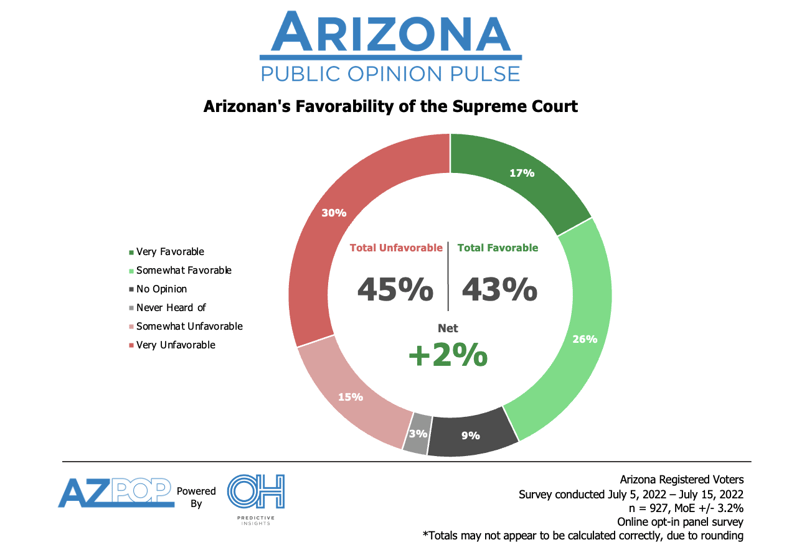 Arizonans are torn on public school prayers. More than half of Arizona registered voters (51%) support the ruling, which restored the employment of a high school football coach terminated for leading students in prayer at a district-sanctioned athletic event.

The U.S. Supreme Court reversed the United States Court of Appeals for the 2nd Circuit's ruling and remanded the case for further proceedings. Forty-four percent of Arizonans support the court’s decision, while 24% oppose the decision.

The New York State Rifle & Pistol Association case had a split among party affiliations. Of those who support the ruling, Republicans are at 62%, Democrats are at 24%, and Independents are at 43%. As for the opposition to this ruling, 10% of Republicans oppose it, 44% of Democrats, and 21% of Independents.

Arizonans support some reforms to the nation’s highest court. In some instances, up to two-thirds of respondents would support constitutional amendments to modify the Court’s structure. In total, 66% of respondents support imposing term limits on Supreme Court Justices. A majority of each party supports the term limit reform: Democrats (84%), Independents (63%), and Republicans (52%).

More than half of the respondents (53%) would support balancing the court, which would ensure there is a balance of Justices by party affiliation.

“After looking at Arizona sentiment toward recent Court rulings, outside of our recent poll on Roe v. Wade, Arizonans are supportive of the other SCOTUS decisions,” said Noble. “With that, it is interesting to see Arizonans are also supportive of implementing term limits for Supreme Court Justices.”

Methodology: This poll was conducted as an online opt-in panel survey. The survey was completed by OH Predictive Insights from July 5th to July 15th, 2022 from an Arizona Statewide Registered Voter sample. The sample demographics were weighted to accurately reflect the registered voter population by gender, region, age, party affiliation, and ethnicity according to a recent voter file derived from the Arizona Secretary of State’s Office and recent Census data. The sample size was 927 registered voters in Arizona, with an MoE of ± 3.22%. Numbers may not equal 100% due to rounding.