Arizonans Want Mail-in Voting to be Secure and Convenient

Three-Quarters of Arizona Voters Support Option to Voter by Mail

PHOENIX (March 22nd, 2022)- Casting your ballot in person on Election Day has traditionally been the standard way to exercise your fundamental right, but voting by mail has become increasingly popular in recent elections. Mail-in voting has been around since the late 1800s, originally to allow soldiers to cast their ballots from the field; however, it wasn’t until after the Civil War that states began to offer no-excuse absentee voting. Still, the 2020 presidential election that took place during the pandemic pushed lawmakers to rethink voting rules. It was the first time in history at least 75% of Americans were able to vote absentee.

A recent survey among Arizona voters gauged support for the election policy that would allow registered voters in Arizona the choice to receive their ballots in the mail. According to the latest Arizona Public Opinion Pulse (AZPOP) survey by OH Predictive Insights (OHPI), 74% of Arizonan voters are in support of the policy, while only 10% oppose it. 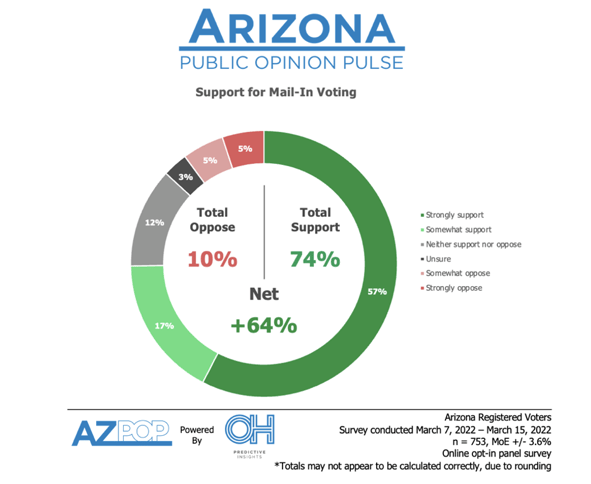 “With the vast majority of Arizonans supporting mail-in voting, it is flabbergasting to me that any candidate would run opposition on something so incredibly popular with voters,” said Mike Noble, OHPI Chief of Research.

“It looks like voters with longer Arizona tenure who are a little more used to Arizona’s participation with mail-in voting are on-board with the election policy, those newer to the Grand Canyon State are more reluctant,” said Mike Noble.

Voters hit controversial ground when it comes to the information being sent off in the mail – such as date of birth and either their driver’s license number, last four digits of their social security number, or their voter ID number – when submitting a mail-in ballot. However, the personal information requirements did not deter most Arizona voters. Nearly two-thirds (64%) of voters support requiring more verification on mail-in ballots while only 14% are in opposition 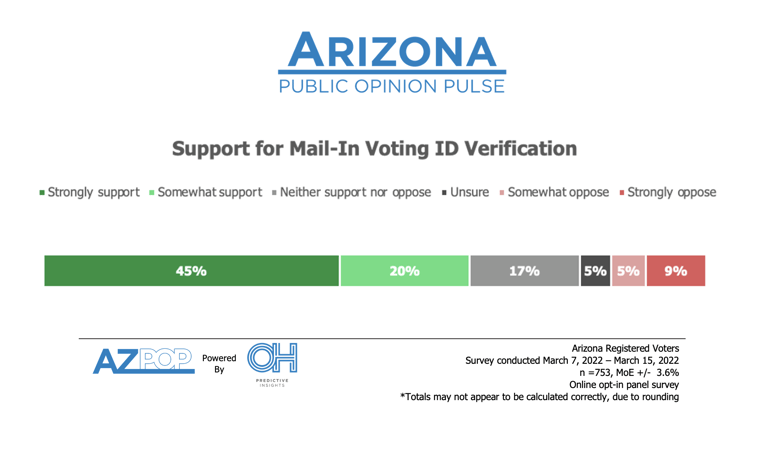 “At the end of the day, Arizona voters want voting to be convenient and secure, even if that means adapting to a new voting norm,” said Noble.