Lake Leads, Robson Gaining – the Tipping Point will lie with the Undecideds


PHOENIX (July 6th, 2022)- Arizona primary elections are less than a month away, and with early ballots being mailed out this week, the race has not cooled off for any of the candidates. In OH Predictive Insights’ (OHPI) second statewide Likely GOP Primary Voter Poll of the current election cycle, Arizona likely voters revealed a competitive race for Governor between Kari Lake and Karrin Taylor Robson, as Matt Salmon has pulled out of the race.

About a week ago, Salmon pulled himself out of the race, leaving both Robson and Lake fighting for undecided voters. In the recent survey, Arizona likely voters were asked whom they would vote for, both with and without Salmon as an option. With Salmon still in the line-up – earning 6% support – Arizona likely voters placed Kari Lake 8 points ahead of Karrin Taylor Robson (31%), showing an increase in support compared to April for Lake (+10%) and Robson (+9%), but a drop for Salmon (-5%). With the former Congressman removed from the list, Robson benefits most with a +13% growth since April compared to Kari Lake’s +11%.

“Seeing the comparison with and without Salmon gives an even closer look into what’s going to happen at the polling booths in August,” said Mike Noble, OHPI Chief of Research. “Although Lake has kept a steady lead, Robson is the clear beneficiary in Salmon’s drop-out; this plus his more recent endorsement might be just what Robson needs to stay competitive in this primary.”

With Matt Salmon’s exit from the race for Governor, most of his voters (80%) flock towards Karrin Taylor Robson, which comes as no surprise as Salmon endorsed Robson shortly after his withdrawal from the race. Robson also picks up virtually all of Salmon’s women voters and most of his voters over 65 years old, aiding her strength among this demographic. Meanwhile, Kari Lake maintains her stronger lead among men (41%) and voters under 65 years old (40%), as well as those in Pima County (43%).

As for Lake’s drag queen controversy, roughly half of likely GOP voters were aware (48%) and half were unaware (46%) of the issue.  When it comes to the impact of the controversy, one-quarter (24%) of likely voters say they are less likely to support Lake because of her statements, but a plurality (45%) is not affected by it.  For a closer look, we break down the impact based on whether or not voters were aware of the issue or not:

“The Lake controversy is more salacious than it is impactful to the race with only half of Likely GOP voters aware of the issue and the other half unaware of the controversy,” said Noble. “A plurality said it made no difference to their vote and wasn’t really effective at moving the needle on Lake’s support or overall impact on the race.”

Kari Lake has a tight grip on the populist, Trump-driven conservatives, while Robson is banking on the traditionalist, establishment wing of the party. Polling results found that likely GOP voters who support the Republican party over Donald Trump are more than twice as likely to support Robson (47%) than Lake (22%), and the converse was also found to be true with 57% of supporters of Trump over the party preferring Lake and only 24% supporting Robson. 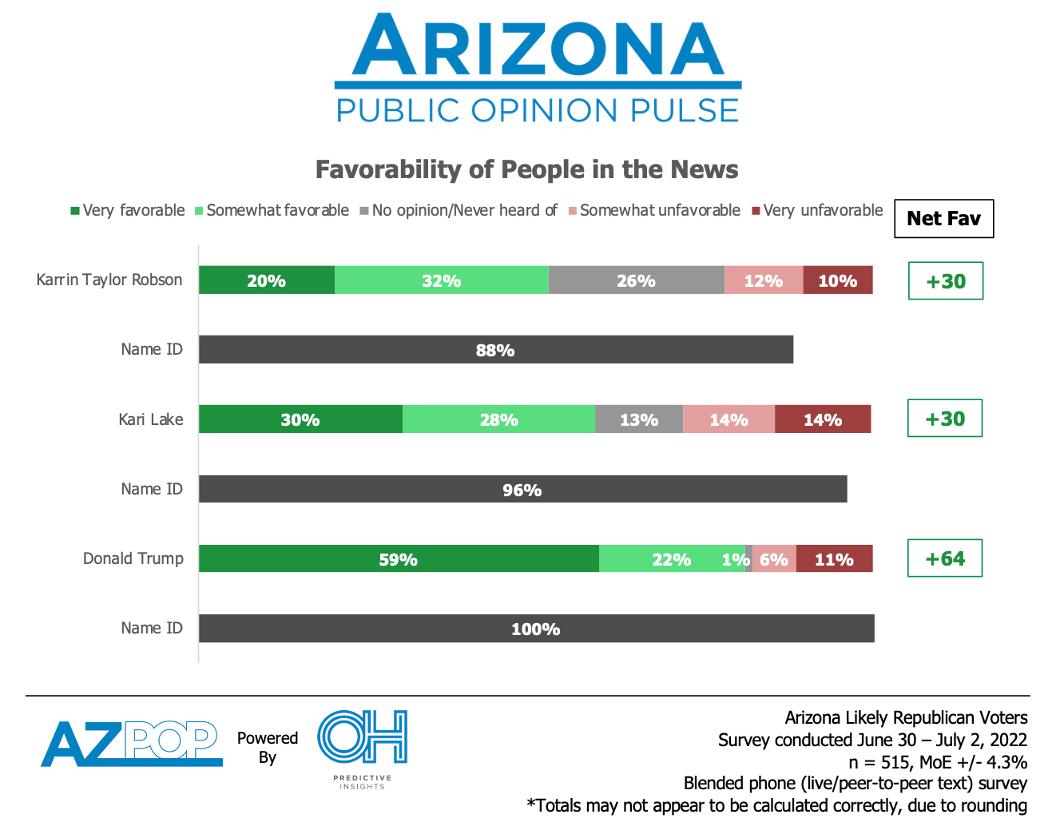 Eight in ten likely GOP primary voters have a favorable opinion of Donald Trump, while more than half (59%) answered “very favorable.” Kari Lake has a 96% Name ID and holds a 2:1 positive favorability among Arizona’s likely GOP primary electorate. Similarly, Karrin Taylor Robson has an overall 52% favorability while 22% revealed an unfavorable opinion. Robson has a strong Name ID (88%) to compete with Lake’s, however, Robson has more opportunity to define herself to voters who haven’t yet settled on an opinion; only 73% of voters have an opinion of Robson, whereas Lake has less room to grow with 87% of voters having an opinion of her.

“With both Lake and Robson having high favorability among voters, it could come down to whom voters feel they ‘know’ best,” said Noble. “Familiarity often breeds support, and Lake has more of both right now. Robson is definitely gaining ground, but will her Salmon endorsement and mostly-spent campaign funds be enough to compete with Lake’s Trump endorsement and name ID come election day? We’ll know in less than a month.”

Methodology: This poll was conducted as a blended live/peer-to-peer text phone survey. The survey was completed by OH Predictive Insights from June 30 – July 2, 2022 from an Arizona Statewide Likely Republican primary voter sample. The sample demographics were weighted to accurately reflect the projected Arizona likely GOP Primary Voter population by gender, region, age, and party affiliation according to a recent voter file derived from the Arizona Secretary of State’s Office. The sample size was 515 likely voters in Arizona, with a MoE of ± 4.3%. Numbers may not equal 100% due to rounding.