PHOENIX (July 12th, 2022)- In the midst of early voting, statewide race results are shedding light on many undecided Arizona GOP voters. According to OH Predictive Insights’ (OHPI) latest poll, Mark Finchem maintains his lead in the Secretary of State race, the Attorney General race is a standoff, and incumbent Kimberly Yee for Treasurer and Tom Horne for Superintendent of Public Instruction hold large leads over their GOP opponents.

More than 7 in 10 likely GOP primary voters are still unsure of whom they’ll vote for in this race (72%), leaving only small percentages as an insight into whom will prevail at the ballot box. The Trump-endorsed and Republican frontrunner, Mark Finchem, continues to enjoy a significant lead (14%) over his opponents who are fighting for a distant second: Michelle Ugenti-Rita (6%), Beau Lane (5%), and Shawnna Bolick (3%). Finchem, a resident of Oro Valley, surprisingly earns a large amount of support (27%) from Pima County voters compared to only 11% from Maricopa County. Finchem is also in the driver’s seat with conservatives (15%) and moderates (10%). Since April, there have been no significant changes in the candidates’ voter support. 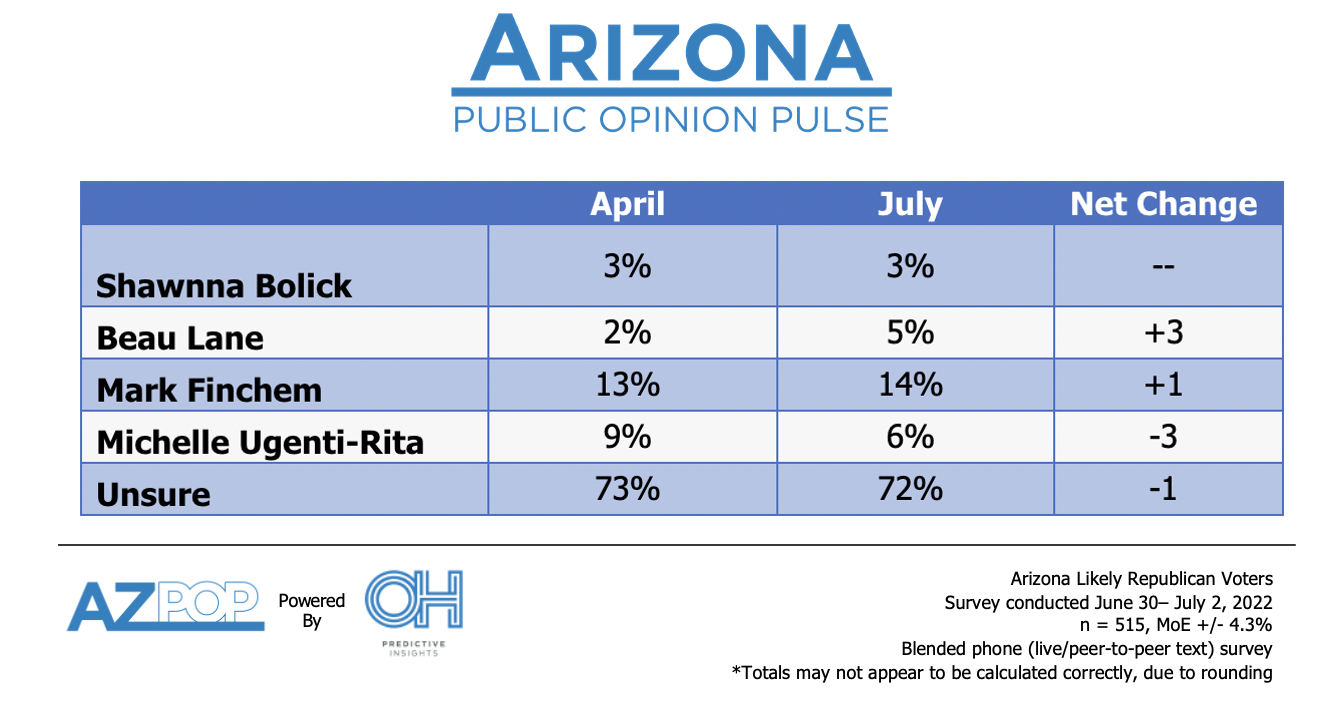 The Attorney General race is currently sitting at a standoff, with two-thirds of voters still undecided (67%). Even with a Trump endorsement, Abe Hamadeh struggles to differentiate himself from the pack. At only 7%, Hamadeh is closely followed by Andrew Gould and Rodney Glassman at 6% each. Dawn Grove is at 5%, Tiffany Shedd at 4%, and Lacy Cooper on the tail end with 3%. 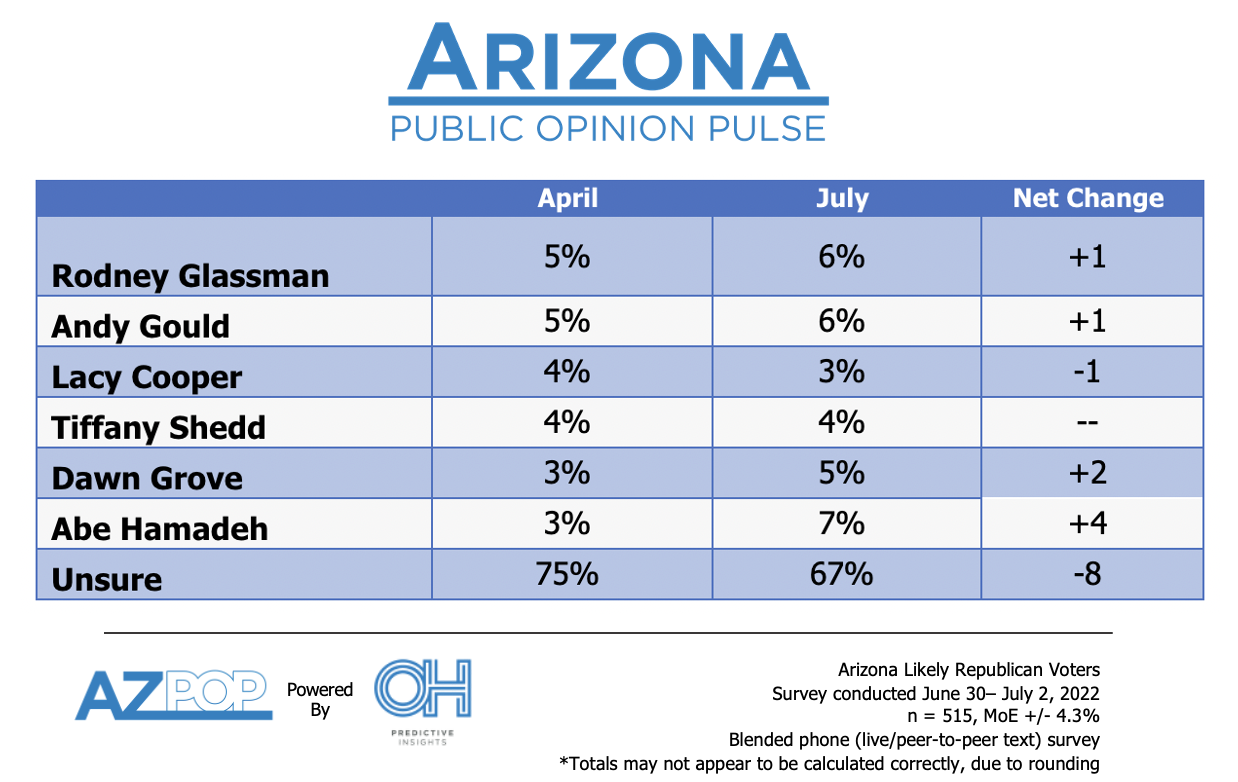 Kimberly Yee holds a double-digit lead at 19% with Jeff Weninger and Bob Lettieri trailing far behind at 5% each. Despite 7 in 10 Arizona GOP voters being still undecided, Yee is a well-recognized incumbent and it will likely benefit her at the polls. 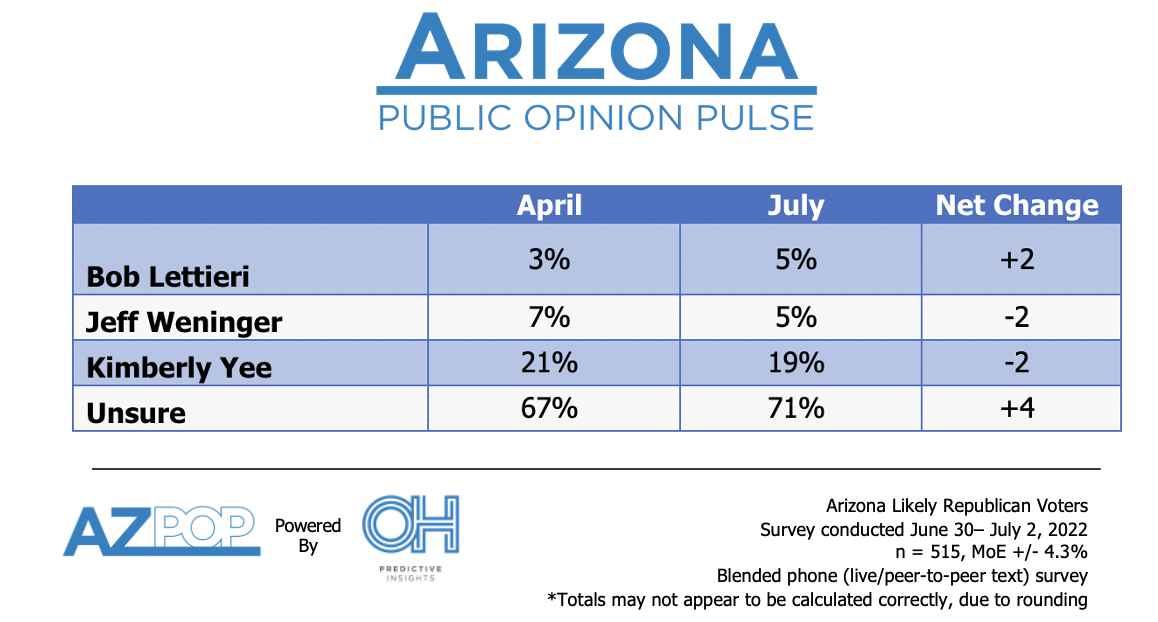 Previous Attorney General Tom Horne is leading the charge for Superintendent of Public Instruction at 18%,while runner-up Michelle Udall has only gathered half the support (9%). Shiry Sapir falls in last place at 7%. Two in three voters are currently undecided. Just like all the other races, there are no significant changes from April. 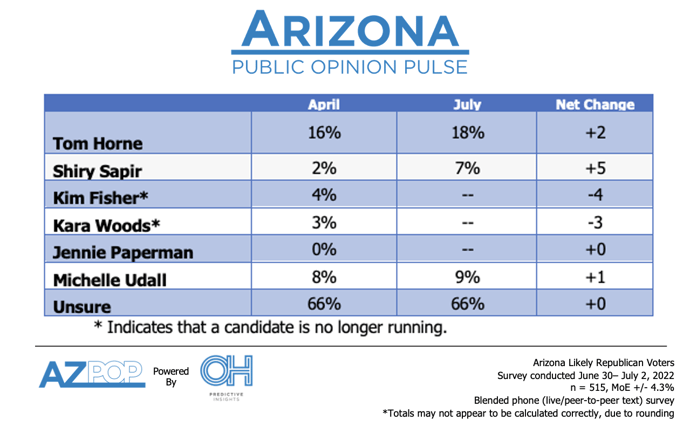 “The Governor and Senate primary is taking up much of the oxygen (and airtime) away fromthese down-ticket races," said Mike Noble, OHPI Chief of Research. "With voters predominantly undecided in these races, their respective campaign efforts will be critical as they chase ballots, get out the vote, and spend their hard-earned campaign dollars leading up to Election Day."