PHOENIX (November 19th, 2021)- President Joe Biden’s job approval ratings in Arizona hit their lowest point this year in September, and his numbers have yet to rebound. According to the latest Arizona Public Opinion Pulse (AZPOP) conducted by OH Predictive Insights (OHPI), since his September slip, President 46 still wades underwater with his approval and favorability ratings – which now mirror the favorability ratings of former President Donald Trump.

Grand Canyon State voters’ combined sentiment remains unchanged since September. Reflecting on his approval ratings, Biden is underwater by more than 10 points with a majority of Arizona registered voters disapproving of the job he is doing (55%) and just 42% approval. These numbers are driven by overwhelming disapproval from Republicans (86%) as well as the three in five Independents who also disapprove of Biden’s job performance. Only 13% of Republicans and 35% of Independents are satisfied with the president’s job performance. Democrats’ attitudes are inverse of the attitudes of Republicans, with 83% approval from Arizona Democrats and only 15% disapproval of Biden’s current job performance. 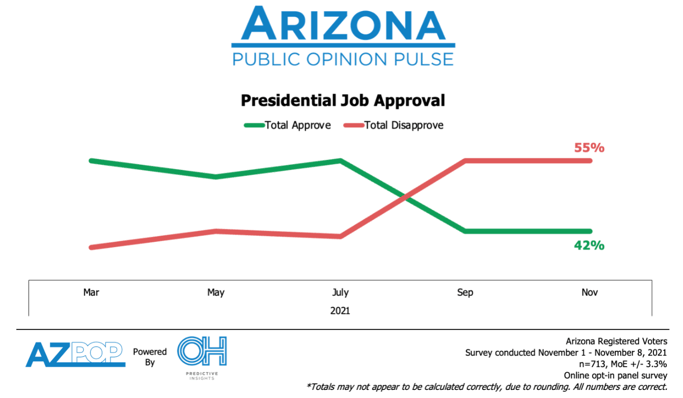 “It isn’t surprising that Biden’s approval ratings among Democrats and Republicans are contrary of each other,” said Mike Noble, OHPI Chief of Research. “However, Independents in a key battleground state rescinding their approval of the President is worth paying attention to if Biden is looking to improve his numbers in Arizona.”

Among Arizona voters, there is a split in opinion among different ethnicities and education levels, with all groups holding negative net approvals of President Biden. White voters without a college degree hold a -23% net approval with 60% who disapprove and 37% who approve of Biden’s job performance. Although white, college-educated voters are a traditionally Democratic-leaning group, this coalition considers the current POTUS to be unfavorable with a net approval of -7% (53% disapprove, 46% approve). Further, Hispanic voters and voters who identify as an ethnicity other than white or Hispanic have identical sentiment on Biden’s performance (-4%), with exactly half who disapprove and 46% who approve of Biden’s work.

President Biden has also lost ground since July among a number of key constituencies who gave him higher marks in July and whose support in 2020 allowed him to become the first Democrat since Bill Clinton to carry Arizona in a presidential election: suburban women, parents, and middle-income voters. 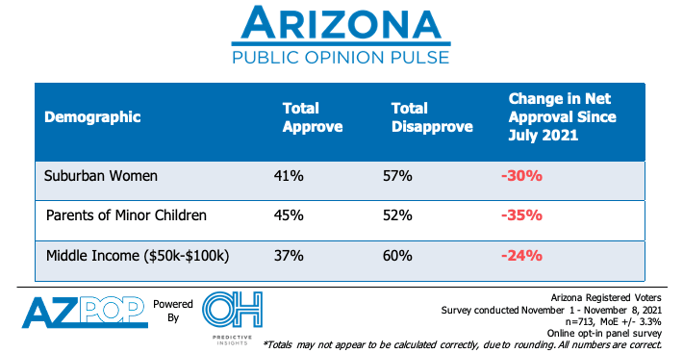 In terms of his handling of top issues, President Biden also maintains negative net approval marks on immigration (-31%), the economy (-14%), and foreign policy (-17%). However, on the issues of COVID-19 (-2%) and the environment (-4%), Biden receives relatively fine marks.

Groups who have the smallest difference in net favorability – those who find Joe Biden and Donald Trump to be equally favorable/unfavorable – include: voters whose top issue is jobs/economy (Biden: -14% net fav, Trump: -19% net fav), those who believe neither party will do better running the state of Arizona (Biden: -26%, Trump: -39%), voters who are unsure on the General Congressional Ballot (Biden: -26%, Trump: -32%), suburban voters (Biden: -22%, Trump: -13%), and Arizona Independents (Biden: -19%, Trump: -26%).

“It throws a curveball to see in the data that Biden has lost ground among many of the groups who put him over the finish line in 2020 such as Independents, college-educated voters, and suburbanites,” said Noble. “With his ratings still steady since September, he still has time to regain the support from these groups prior to the next election.”