PHOENIX (October 12, 2021)- Arizona legislators are playing a major role in current debates over drug pricing reforms, a major part of pending budget legislation in Congress. A new survey commissioned by AARP Arizona and conducted by OH Predictive Insights shows Arizona voters across the aisle agree on the need for affordable medication and action by their members of Congress.

The survey results showed vast majority support for each proposed measure being discussed in Congress to reduce drug prices. The most favored initiative was allowing Medicare to negotiate for the price of drugs, winning over 94% of Arizona voters. Every year, Medicare spends more than $129 billion on prescription drugs, but is legally prohibited from negotiating with companies to get better prices. Penalizing drug companies that raise their prices higher than inflation is the least palatable measure compared to others, but still garners 84% support. 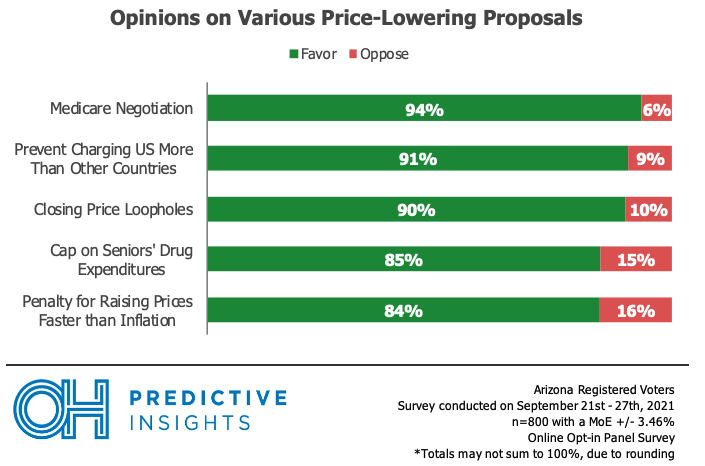 An overwhelming majority of Arizona’s electorate agrees: Congress needs to tackle high prescription drug costs because some people can't afford to buy medicine and pay for other necessities (89% of voters). Two thirds (67%) of voters would view a member of Congress that takes action to lower drug prices more favorably – even Congress members of a differing political party who take action to lower drug prices would still enjoy the support of 59% of Arizona voters.

“It’s not too often that you see majority support for politicians of a voter’s contrasting party, even if it is only hypothetical support,” said Mike Noble, OHPI Chief of Research. “Arizona’s electorate couldn’t be more clear. Regardless of partisanship, voters want a Congressperson who will work to combat unaffordable prescription drug costs.”

According to the survey, Arizona voters broadly believe there must be a way to reduce drug prices without stunting innovation (89%). Two thirds (66%) of voters do not believe that innovation will suffer if Medicare is allowed to negotiate for lower prices. Voters aged 50+ are more likely to have this stance (73%) than younger voters (57%). 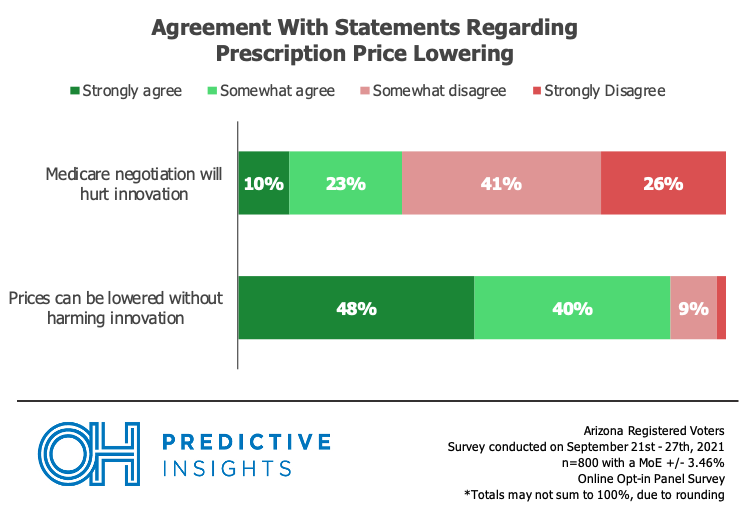 "The impact of high prescription drug prices is far-reaching in Arizona," said AARP Arizona State Director Dana Kennedy. The survey found that two thirds of Arizona voters (65%) are very or somewhat concerned about the affordability of prescription drugs. Four in five Arizona voters believe drug prices in the US are higher than those of other countries – and those voters’ assumptions are correct. According to a 2021 analysis by the RAND Corporation, US drug prices were nearly three times higher than average drug prices compared to similar countries – and even higher for brand-name drugs.

“Arizonans are sick and tired of paying nearly four times what people in other countries pay for the same medicine,” said AARP Arizona State Director Dana Kennedy. “There are proposals on the table now that would finally help, and voters want to see action.” 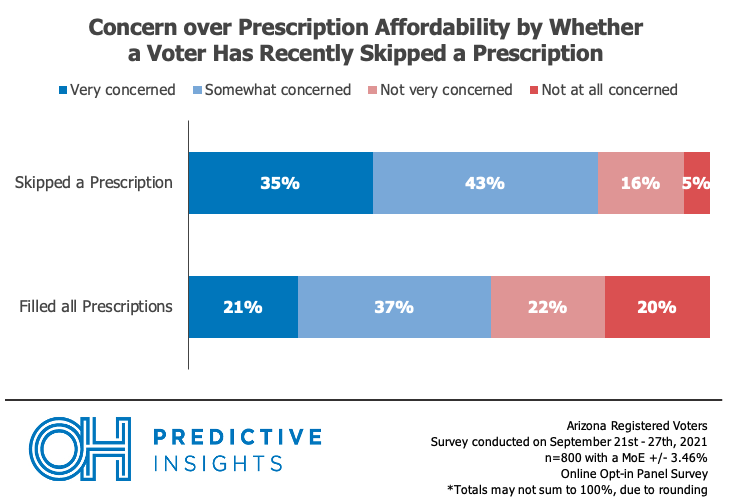 Likewise, one third of voters (32%) have decided not to fill a prescription that a doctor has given them in the last two years. Nearly half (46%) of Hispanic/Latino voters in Arizona have skipped filling a prescription, compared to only 29% of white voters.

In partnership with AARP Arizona, OH Predictive Insights will be hosting a live webinar on Thursday October 28th, 11am MST/2pm ET where we will take a deeper dive into this data, segmenting the opinions and perceptions of Arizona’s electorate by key demographic groups and identifying strategic opportunities to curb the rising costs of medication.

Register for the webinar here:

Can't make the live time? Register anyway for access to the webinar recording on-demand after the event!

Methodology: This poll was conducted as an online opt-in panel survey. The survey was commissioned by AARP of Arizona and completed by OH Predictive Insights from September 21st to September 27th, 2021, from an Arizona Statewide Registered Voter sample. The sample demographics were weighted to accurately reflect Arizona’s registered voter population by gender, region, age, ethnicity, and educational attainment according to statistics from a voter file derived from the Arizona Secretary of State’s Office as well as recent census data. The sample size was 800 registered voters in Arizona, with a MoE of ± 3.46%. Numbers may not equal 100% due to rounding.

About AARP: AARP is the nation’s largest nonprofit, nonpartisan organization dedicated to empowering people 50 and older to choose how they live as they age. With a nationwide presence and nearly 38 million members, AARP strengthens communities and advocates for what matters most to families: health security, financial stability, and personal fulfillment. AARP also produces the nation's largest circulation publications: AARP The Magazine and AARP Bulletin. To learn more, visit www.aarp.org or follow @AARP and @AARPadvocates on social media.