Though New COVID Decisions Prove Unpopular, Gov. Ducey is Above Water – Biden Not so Much

Toplines and Crosstabs for general population can be found here

Toplines and Crosstabs for registered voters can be found here


PHOENIX (September 21st, 2021)- Over the last 6 months, even with ceaseless efforts from ADHS and local and federal governments, and in the wake of the delta variant, those approximately 20% of Arizonans who have been unwilling to get the COVID-19 vaccine since March are holding fast to their decision. As of September’s Arizona Public Opinion Pulse (AZPOP) conducted by OH Predictive Insights, 22% of Arizonans are still unwilling to take the vaccine. However, 70% of Arizona adults – the coveted herd immunity value – have either already been vaccinated or are willing to do so.

Looking into the sentiment of those Arizonans who are not willing to take the vaccine, a strong plurality (49%) are still slightly/somewhat concerned about the current state of the pandemic in Arizona, and one in five (24%) are extremely/moderately concerned. Even so, more than half of those unwilling (52%) believe the COVID situation will remain the same in the next 30 days, as opposed to believing the situation will get better or worse. 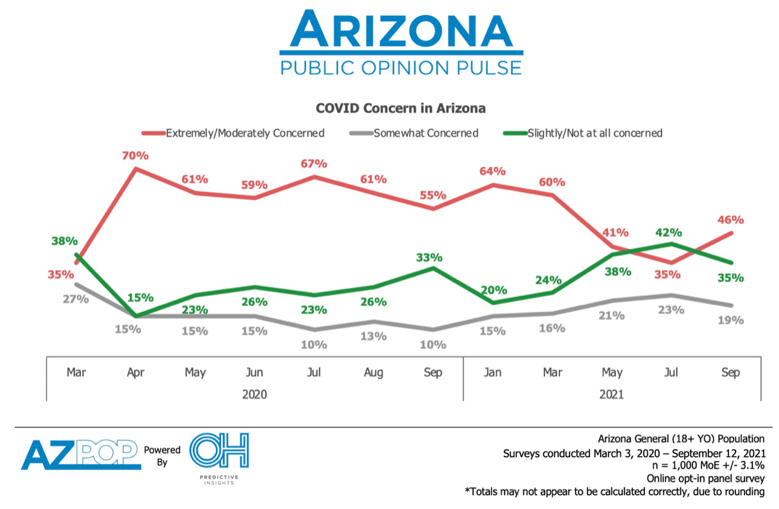 “Tracking vaccine willingness has proven especially insightful in the last 6 months as we learn that a meaningful share of residents is unwavering in their decision against taking the COVID vaccine,” said Mike Noble, OHPI Chief of Research. “Analyzing the data from our polling has allowed us to paint a clearer picture of which groups are the most unwilling and understand the ‘why’ behind their decision by looking into what influences their opinion one way or another.” 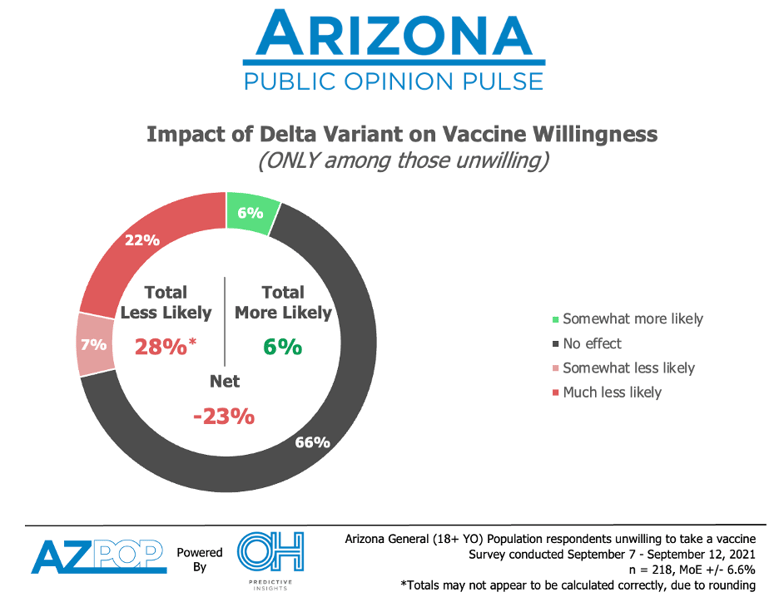 With vaccine unwillingness holding steady despite the surge of the delta variant, a plurality of Arizonans approve of the job Doug Ducey is doing to combat the Coronavirus (48% approve, 42% disapprove). This is a significant shift from his job approval rating in July of 2020 where he was 18 points underwater. Ducey’s base of approval is found among those who are less concerned about the spread of COVID (73% approve of his handling), while only 31% who are extremely/moderately concerned approve of Ducey’s job combating the virus.

Although most Arizonans approve of Ducey’s handling of the pandemic, some of his recent actions regarding schools are unpopular. There is strong opposition to both of Ducey’s school COVID policies asked about in this survey. Half of Arizonans oppose Governor Ducey’s ban on school mask mandates – including 39% of Arizonans who strongly oppose the decision. Similarly, 57% of Arizonans oppose the decision to withhold funds from schools with mandates – including 44% of residents strongly oppose it. However, nearly two-thirds (63%) of respondents who would not take the vaccine support Doug Ducey’s decision to prohibit schools from requiring students to wear masks, while only 21% oppose. 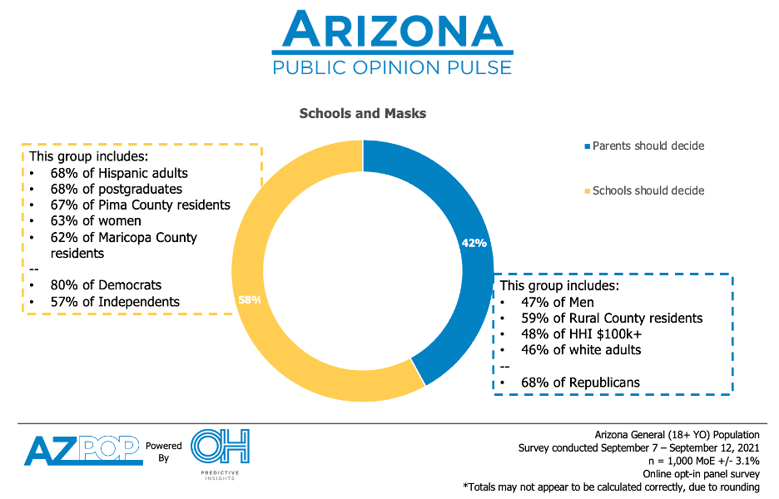 Notably, though parents disapprove of Ducey’s ban on mask mandates in schools, the group is still more supportive than non-parents. Most respondents, especially those without children, believe that schools should have the power to decide whether students wear masks. The strongest belief that schools should make decisions regarding mask mandates is found among Democrats (80%), Hispanic adults (68%), postgraduates (68%), and Pima County residents (67%). The opinion that parents should make decisions regarding mask mandates is likeliest to be found among Republicans (68%) and Rural County residents (59%). Three-quarters (72%) of respondents who would not take the vaccine also believe the decision whether students wear masks should rest with parents.

Governor Ducey wasn’t the only government official to experience a shift in approval among Arizona voters. In a sharp reversal from May, Biden’s job approval in regard to handling COVID took a major hit in September. This survey found that the 46thU.S. President has a -4% net approval on his handling of the COVID-19 issue a shift of 36 points from the poll taken four months prior.

This shift begs the question, what changed between May and September to cause such a drop in Biden’s COVID approval? The answer may lie in the U.S. COVID-19 case load and vaccine distribution rates in that time frame. While Biden was enjoying a +32% net approval on his handling of COVID from Arizona voters in May, the U.S. was seeing an average of 49.6k cases and 2.3 million vaccines administered per day. In September, Biden’s -4% net approval was likely influenced by rising daily cases (152.3k per day) and diminishing vaccine distribution (826k per day).

“Another key takeaway from this data: Arizonans have little tolerance for another stay-at-home order or closing public schools again. Mask mandates were the only combative measure that earned the support of a majority of residents,” said Noble. 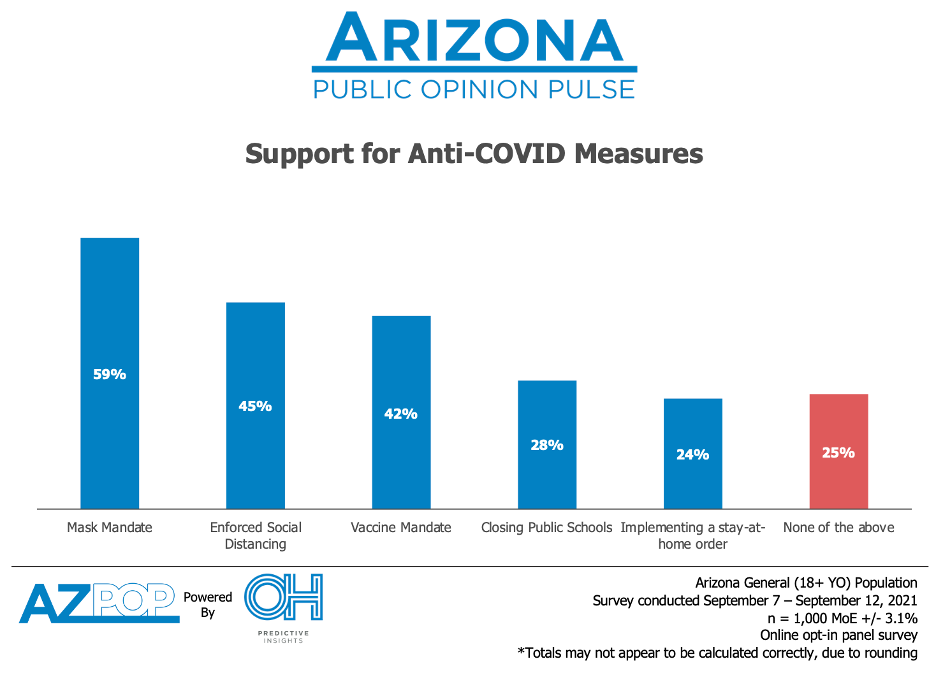 Methodology: This poll was conducted as an online opt-in panel survey. The survey was completed by OH Predictive Insights from September 7 to September 12, 2021, from an Arizona Statewide General Population sample. The sample demographics were weighted to accurately reflect gender, region, age, ethnicity, and education according to the most recent census data available. The sample size was 1,000 general population (18+ YO) Arizonans, with a MoE of ± 3.1%. Numbers may not equal 100% due to rounding.