Majority of Arizonans Vaccinated, Expect Conditions to Improve in Next 30 Days

Poll toplines and crosstabs (General Population) can be found here

Poll toplines and crosstabs (Registered Voters) can be found here

PHOENIX (May 19th, 2021)- More Arizonans than ever are feeling confident in a post-COVID future as a majority of Arizonans have received at least one vaccine shot, according to OH Predictive Insights’ most recent Arizona Public Opinion Pulse (AZPOP).

Optimism among Arizonans continues to climb, with 55% expecting COVID conditions to be better next month than they are now. Only 15% expect things to worsen.

“Arizona has turned the corner,” said OHPI’s Chief of Research, Mike Noble. “Vaccine distribution is expanding to more and more of the population and the light at the end of the COVID tunnel is more visible than ever.” 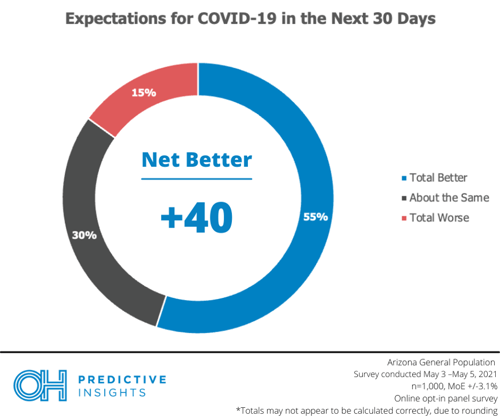 Fifty-four percent of Arizonans 18+ say they have already received the vaccine, which is broadly in line with ADHS reporting. Note: ADHS reporting includes Arizona residents under the age of 18, while OHPI’s AZPOP only surveys Arizona adults (18+ YO).

Seven in 10 Arizonans surveyed have already been vaccinated or say they would take a vaccine. One-fifth (21%) would not. Of the share of respondents who would not take a vaccine, hesitancy is highest among conservatives (34%), non-White respondents (27% of Hispanics, 25% of other non-Whites), and younger people (25% of 18-54-year-olds).

In encouraging news for the age group at a higher risk of serious COVID symptoms, 76% of people 55+ report already having taken the vaccine, twice that of the 18-54-year-old population (38%). 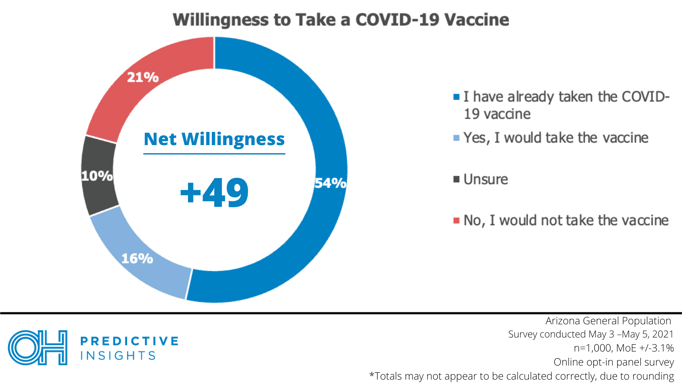 OH Predictive Insights Chief of Research, Mike Noble, had this to say about vaccine distribution in Arizona: “The great news with the success of the vaccine rollout is we are seeing drops in concern across the board, even among the groups who have historically been most concerned over COVID.”

When it comes to Arizonans’ concern about the Coronavirus, only 41% are extremely or moderately concerned, while 38% are slightly or not at all concerned. The news sources that a person watches on a regular basis (at least once per week) plays a large role in their level of concern. Sixty-two percent of regular CNN watchers and 63% of regular MSNBC watchers are extremely or moderately concerned about COVID, compared to only 43% of regular FOXNews watchers who share the same level of concern.

In each survey that OHPI has collected data on the subject of COVID-19 since the beginning of the pandemic, concern over the outbreak has been closely tied to a respondent’s political party registration. Looking at registered voters, extreme and moderate concern over the spread of COVID is at its lowest point since March of 2020 among Democrats (57%) and Independents (39%), the two political parties who have consistently been the most concerned about the spread of the Coronavirus in Arizona. Republican voters (23%) are statistically tied for their lowest level of concern since March 2020.

“The data has been consistent regarding COVID. The virus doesn’t care about political party, income level, gender. It’s like the honey badger - COVID don’t care!” said OHPI Chief of Research, Mike Noble. “Sadly, due to hyper-polarization in politics, the virus was treated as a political football. But, with the politicking of COVID aside, it seems that everyone is starting to move on due to the efforts of leadership and healthcare heroes of Arizona.”

As a whole, Arizonans are split on why they wear masks. It is important to note that this AZPOP was conducted before the CDC released their statement saying fully vaccinated people no longer need to wear masks (except where required by local law or business guidance). Looking at the most reported reasons, 37% say they wear a mask because they are concerned about spreading COVID while another 37% say they wear one because they are following guidelines from the CDC or other health authorities. The group most likely to say they wear masks to avoid spreading COVID is liberals (22%). Only 12% of Arizonans as a whole say this.

Through the course of the global pandemic, the shift to remote work has aided the population in mitigating the spread of the virus, and a majority of workers are satisfied with their experiences working from home. The benefits of remote work have translated to a preference for remote work over time for many, and our survey shows that a large share of Arizonans would rather participate in most work events from home. Among employed respondents (either part-time, full-time, or self-employed), more than half prefer attending large group meetings (58%), or small team projects (51%), and presenting in front of a group (51%) virtually from home. Arizona workers favor one-on-one meetings with their supervisor (46%), one-on-one meetings with people they supervise (43%), and meeting new clients or customers (42%) virtually from home.

“Among the aftereffects from this pandemic that we haven’t seen yet, one thing is for certain: Going back to work as normal after the pandemic has passed will come with a need for employers to be receptive and flexible to change in order to remain competitive for top talent,” said Mike Noble, OHPI Chief of Research.