Democratic Downturn: Utah as Red as Ever

Democratic Downturn: Utah as Red as Ever

Since August, Biden’s favorability among Utah voters has dropped 20 points, making his net favorability in November -31% (32% favorable, 63% unfavorable); former President Donald Trump, Biden’s former presidential contender, has held relatively steady since August, currently sitting at -2 points (47% favorable, 49% unfavorable). Nonetheless, the 46th President has also lost ground with each party in terms of job approval, especially amidst Utah’s GOP and Independent voters. Biden’s net approval from Utah Republicans was -37 in August but has now dropped to -68 points (15% approve, 83% disapprove) as of November’s UTPOP. Among Utah Independents, President Biden’s net approval dropped from -3 in August to -15 points (39% approve, 54% disapprove) in November. While his overall approval numbers have sunk, Biden’s approval rating from Utah Democrats is still above water, but slowly diminishing. In August, Utah Democrats’ net approval rating for Joe Biden was +76 which has now dropped to +62 points (79% approve, 17% disapprove).

More than half of Utah men (52%) strongly disapprove of Biden’s job performance, along with 43% of women who say the same. In Salt Lake County, where he won by 11 points in the 2020 Presidential election, Biden is now underwater by -8 points (44% approve, 52% disapprove). Joe Biden is also sinking with moderates (-22) and conservatives (-73), but is currently above water with liberals (+54).

“Although Utah doesn’t have the same battleground status as other states in the Southwest, the data is telling a similar story in Utah as it has told in Arizona and Nevada: voters across the aisle are increasingly disappointed in the job Biden is doing, and they are turning their frustrations to Democratic office holders and candidates,” said Mike Noble, OHPI Chief of Research.

“Despite the support for the Build Back Better Act from a majority of American voters, the Democratic President’s economic plan does not seem to hold well among Utah’s electorate,” said Mike Noble, “especially among older Republican men making more than $100k per year.”

On the state generic ballot which asked voters which party they believed would run the state better, Republicans still hold a large lead (51%) compared to Democrats (20%). While more Beehive State Independents lean towards favoring Republicans over Democrats (30% prefer Republicans, 23% prefer Democrats), overall, they are not confident in either party’s ability to lead Utah (48%). Looking to the congressional generic ballot which asked voters which party’s candidate they would vote for in their US House race, Republicans also hold a meaningful lead (41%) over Democrats (20%) in Utah. 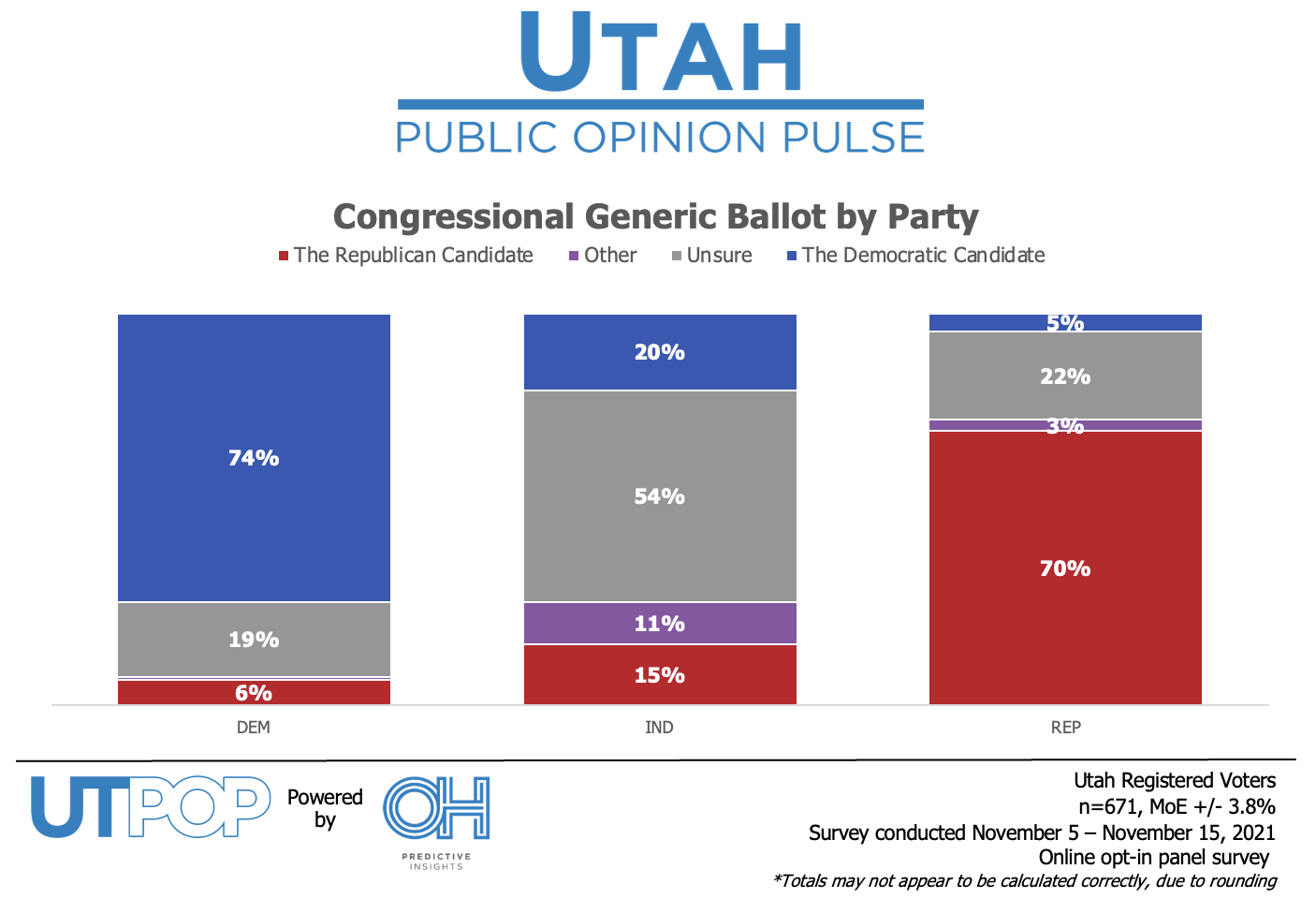 According to the survey, two thirds of Utah Independents are either unsure whom they will vote for on the congressional ballot (54%) or are voting for another candidate (11%). Utah’s most populated county, Salt LakeCounty, is evenly split on the congressional ballot (32% Republican/31% Democrat), while all other regions in the state lean Republican by at least a 2:1 margin – and in some cases, a 3:1 margin. A note to add: Utah recently redrew its Congressional districts which split portions of Salt Lake County into each of Utah’s four Congressional districts. All four districts are heavily Republican, according to FiveThirtyEight.

“Between Utah voters’ net opposition to Build Back Better, Utah Republicans’ substantial leads on generic and congressional ballots, and Biden’s rapidly dissolving numbers among Utah voters, Utah is as red a state as ever,” said Noble.

Methodology: This poll was conducted as an online opt-in panel survey. The survey was completed by OH Predictive Insights from November 5th – November 15th, 2021, from a Utah Statewide Registered Voter sample. The sample demographics were weighted to accurately reflect gender, region, age, party affiliation, ethnicity, and education. The sample size was 671 completed surveys, with a MoE of ± 3.8%. Numbers may not equal 100% due to rounding.