Kelly Faces Alarming Favorables One Year Out from Election


PHOENIX (November 22nd, 2021)- When Sen. Mark Kelly was elected in 2020, his victory marked the first time Arizona was represented by two Democrats in the United States Senate since the early-1950s. Since taking office, Kelly has established himself as more of a party-line Democrat, while his colleague, Sen. Kyrsten Sinema, has ruffled feathers by opposing some of her party’s key priorities. A new Arizona Public Opinion Pulse (AZPOP) conducted by OH Predictive Insights (OHPI) suggests that both Democrats could be in danger of losing their runs at re-election.

Since President Joe Biden’s inauguration, many of his ambitious legislative priorities – such as voting rights reform, his budget framework, and climate change legislation – have been stalled in the evenly divided Senate. Many blame the stalled legislation on Sinema, and OHPI’s polling suggests that Arizona Democrats are starting to have the same feeling. 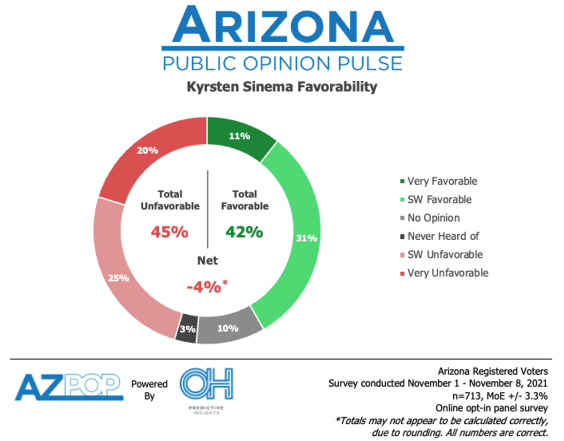 Kyrsten Sinema’s favorability ratings are roughly split among Arizona voters, with 42% viewing her favorably and 45% viewing her unfavorably. What is especially interesting is the Democratic Senator’s ratings across the aisle – Sinema’s numbers with Republicans are above water while her numbers with Democrats are underwater. Forty-eight percent of Republicans view Sinema favorably and 45% view her unfavorably. Meanwhile, just 42% of Sen. Sinema’s own party view her in a favorable light and 47% hold an unfavorable view of her.

“Sen. Sinema’s growing unpopularity with voters from within her own party could prove fatal in 2024 when she will have to ask for Democrats’ support for re-nomination,” said Mike Noble, OHPI Chief of Research. “While there is still time between now and then, Sinema has ground to make up with her constituents in the next three years.”

“Sinema’s holding out on the reconciliation bill caused a lot of political pressure from left wing of her party, and her numbers were beginning to sour because of it,” said Mike Noble. “Sinema was walking a delicate tight rope with her constituents, and as we see in her numbers now, it appears that rope was looking more like fishing wire.”

Sinema’s opposition to reforming the Senate filibuster has angered many progressives. Arizona’s electorate, however, is having a difficult time gauging the Senator’s exact position on the Senate rule. The survey found that 42% of Arizona voters believe Sinema supports the filibuster, while a statistically equivalent 39% are unsure where she stands.

With less than a year until he must face voters once again, results of this latest AZPOP survey could serve as a warning sign for Sen. Mark Kelly, as the freshman Democratic Senator’s favorable numbers are underwater by seven percentage points – he is viewed favorably by 41% of Arizona voters, and unfavorably by 48%.

Unlike Sinema, Kelly’s numbers with partisans fall in line with your typical swing state Democratic Senator: 75% of Democrats view him favorably, and 76% of Republicans view him unfavorably. His low numbers can also be attributed to Independents, with whom he is underwater by 10 points.

"As President Biden faces his lowest approval ratings since taking office, voters are turning their frustration to Democratic candidates,” said Noble. “That’s something Senator Kelly should keep in mind as he faces re-election in one of the country’s closest swing states." 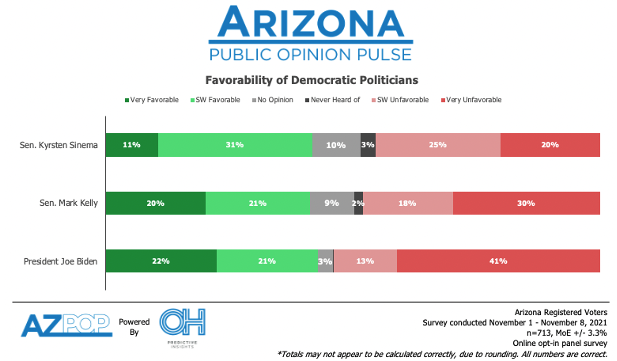 Nationwide polling has found decent support for President Biden’s key legislative priorities among voters, even as the President himself faces low approvals. Arizona has been no exception to this trend.

In the Grand Canyon State, support for the Build Back Better Act – the President’s economic framework – is six points above water. Forty-seven percent of Arizona voters support the bill while 41% oppose it. Even Independents, who are currently key players in driving Biden’s unpopularity, narrowly support the bill (46% support the bill, 39% oppose it).

“Both Sinema and Kelly have work to do if they want to hold onto their seats,” said Mike Noble. “For Sinema, she must rebuild some of the bridges she seems to have burned with voters in her own party. For Kelly, he will likely have to navigate a midterm environment with an unpopular Democratic President.”