Disparity within the GOP on Mar-a-Lago Search Sentiment

Disparity within the GOP on Mar-a-Lago Search Sentiment

PHOENIX (October 3rd, 2022)- Buzz has been circling the news regarding opinions on the FBI investigation at Mar-A-Lago, the residence of former U.S. President Donald Trump. OH Predictive Insights’ (OHPI) latest Arizona Public Opinion Pulse (AZPOP) assessed Arizona likely voters’ sentiment on the FBI investigation and whether they approve or not. According to the survey, sentiment is split with 41% of likely voters who felt the search was evidence that Donald Trump committed a crime, while 46% said it was done to damage his career.

“By and large, it is clear that Trump has an impactful hold on the GOP as a whole,” said Mike Noble, OHPI Chief of Research. “Even almost two years after his presidency, Trump’s loyalists in the Republican party still very much have a hand on the steering wheel.”

Across all demographics, a large majority of likely voters (85%) have seen, read, or heard about the FBI conducting a search warrant on former President Donald Trump’s Mar-a-Lago resort in Florida. Gender, age, and ethnicity seem to be the prime determinants of a voter’s degree of awareness. 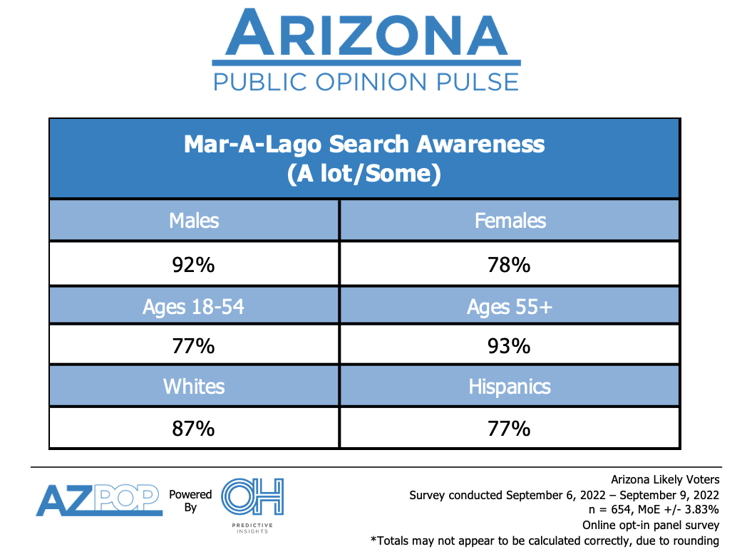 A large impact on awareness comes from where voters receive their information daily. A majority of those who consume news from Fox News (63%), CNN (62%), and local daily TV (57%) have heard a lot about the Mar-a-Lago search.

Not surprisingly, dependent on the network, the sentiment of the FBI search of Mar-A-Lago differed among likely voters. An equal share of CNN and Fox News daily watchers have opposing views. CNN daily watchers felt more strongly that the search was because Trump committed a crime (67%), while Fox News viewers felt the search was political (68%).

Likely Voter Sentiment on the “Why”

The news has been circulating with differing opinions as to why the FBI investigated Trump’s Mar-A-Lago residence. The recent survey gauged whether Arizonans felt the conducted search warrant on former President Donald Trump’s Mar-A-Lago resort is primarily due to evidence he committed a crime or due to motivation to damage his political career. While 41% of likely voters felt that the FBI conducted a search on Mar-a-Lago was evidence that Donald Trump committed a crime, 46% stated it was done to damage his political career. The remaining 13% were unsure.

Perhaps unsurprisingly, older likely voters were, in most cases, more likely than younger voters to side with the former president. The only exception was found among 55-64-year-olds, who were split down the middle with 44% saying the former president committed a crime and 47% stating the search was done to damage Trump’s career.

“All three parties appear to be holding their respective bases in their opinions on the Mar-a-Lago search – most Republicans say it was politically motivated to damage Trump’s career, most Democrats say, ‘you do the crime, you do the time,’ and Independents aren’t picking sides,” said Noble. Independents were divided down the middle with 44% siding with the FBI and 42% with the former president.

Overall approval of the FBI search of Trump’s Mar-a-Lago home was relatively split, with 49% of likely voters approving and 42% disapproving. The recent survey found a divide across party lines in their approval of the search. Nearly 9 in 10 Democrats (88%) approve of the FBI search, with only 8% disapproving. Republicans, however, were not as united in their stance. While 7 in 10 stated their disapproval (71%) of the Mar-A-Lago search, 20% expressed approval. Independents remained characteristic, with 48% disapproval and 42% approval.