General Population Toplines and Crosstabs can be found here

Registered Voter Toplines and Crosstabs can be found here

PHOENIX (March 29th, 2022)- As rising gas prices continue to burden consumers across the nation, a recent study was conducted to assess Arizonans’ sentiment toward the surge in gas prices and outlook on the near future. According to the latest Arizona Public Opinion Pulse (AZPOP) survey by OH Predictive Insights (OHPI), 4 in 5 Arizonans expect gas prices to be higher next month than they are now, while only 15% expect them to be the same or lower.

Throughout history, the US has seen inflation on gas prices, but never this high. In 1929, gas cost 21 cents per gallon, which is equivalent to $3.48 per gallon current US dollar amount when adjusted for inflation. The previous most recent gasoline cost surge was between 2002 to 2008 when gas steadily rose from $1.36 to $3.27 per gallon, which comes out to $4.31 per gallon when adjusted for inflation using the value of the U.S. dollar in 2022. According to AAA, Arizona is among the nation’s top ten most expensive markets at $4.61 per gallon.

Most Arizonans are coming to terms that they will have to deal with high prices at the pump for the short-term, however, some are expecting relief in the long-term. The March AZPOP found 51% of respondents expect gas prices to be higher next year than they are now, 23% expect them to be lower, and 19% expect them to be the same. 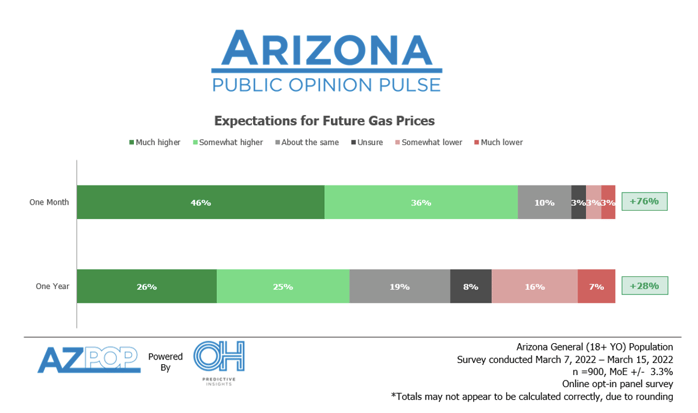 “As pocketbook issues become more and more pressing to Arizonans, a majority of residents appear to be bracing themselves for the pain at the pump to continue into the next year,” said Mike Noble, OHPI Chief of Research.

Regarding long-term prices, the AZPOP found which groups of voters expect gas prices to be higher in a year and which groups predict the price at the pump to be lower in the next year. 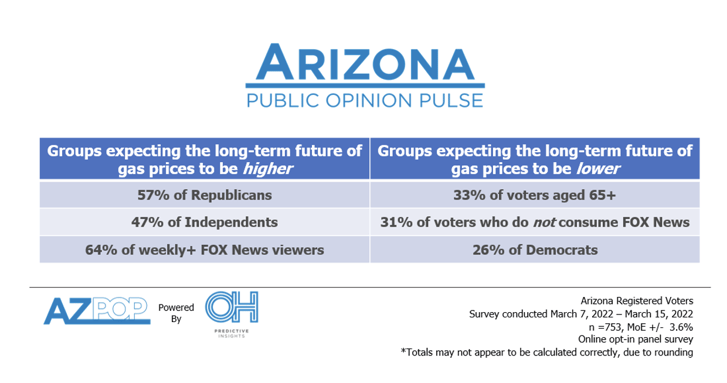 A study by Pew Research Center in 2008 (the previous most recent surge in gas costs) was conducted as a part of a weekly News Interest Index in conjunction with the News Coverage Index to gauge Americans’ attentiveness to major news stories. According to this 2008 research, 62% of Americans said they followed news about gas prices very closely, and 4 in 10 said it was the story they followed more than any other. Only 15% of Americans said the 2008 presidential campaign was their top story even though the press devoted more news coverage to campaigns (26%) than to rising gas prices (7%).

“With the height of election season quickly approaching, it is imperative that government leaders address concerns that are top of mind for voters or risk being taken to the cleaners at the ballot box,” said Noble.