GOP Establishment Could be Trumped in 2024

GOP Establishment Could be Trumped


PHOENIX (November 18th, 2021)- Despite the nearly three years until the next presidential election, a new poll by OH Predictive Insights (OHPI) finds that more than half of Arizona Republicans believe Donald Trump should follow in Grover Cleveland’s footsteps and become the first former president in more than a century to seek the office after losing re-election. The poll finds that, should he decide to run, Trump would be a prohibitive favorite in the race for the GOP nomination, running far ahead of any competitor in a crowded field.

This survey was the newest edition of OH Predictive Insights’ Arizona Public Opinion Pulse (AZPOP). The AZPOP is a statewide survey that provides regular updates on the moods, opinions, and perceptions of Arizonans on hot topics facing the state. This AZPOP was conducted November 1st – November 8th, 2021 and surveyed 713 registered voters in Arizona, giving the survey a margin of error of +/- 3.7%. 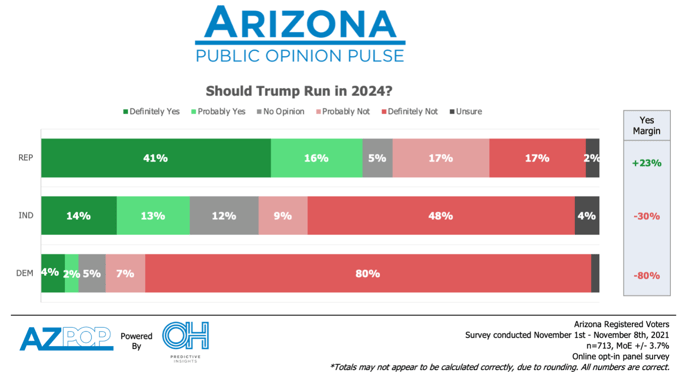 “While former President Trump may be the ideal candidate for Republicans, nominating him could spell disaster for the party’s hopes to retake the White House,” said OHPI Data Analyst Jacob Joss. “With only a quarter of Independents and even fewer Democrats wanting a ‘Trump comeback,’ he may not be a viable candidate in the Grand Canyon State.”

Diving deeper into Trump’s chances of winning the Republican nomination in 2024, he holds a commanding lead at this point in the cycle. Crowded primary fields have become a trend in presidential politics recently – more than 15 Republicans participated in at least one debate in the 2016 GOP primary, and more than 20 Democrats did so in their party’s 2020 primary – and if the 2024 GOP primary shakes out in a similar way, with multiple Republicans running against Trump, the former president is in a solid position to face whomever the Democrats nominate heading into the 2024 general election. Given the option of nine prominent Republicans (Former President Donald Trump, Former Vice President Mike Pence, Florida Governor Ron DeSantis, Former UN Ambassador Nikki Haley, Florida Senator Marco Rubio, Utah Senator Mitt Romney, Texas Senator Ted Cruz, Wyoming Representative Liz Cheney, and Former New Jersey Governor Chris Christie), 48% of Arizona Republicans would support Trump, 16% would vote for DeSantis, and no other candidate receives more than 10% support. 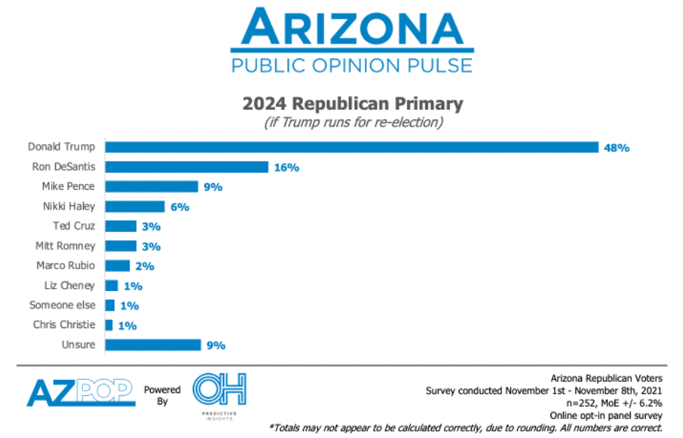 The survey also found that, in the eyes of Arizona Republicans, Donald Trump Jr. would not be a suitable replacement for his father should the former president decide against another White House run. When asked the same 2024 GOP primary question, but replacing Donald Trump for Donald Trump Jr., the younger Trump earned the support of 8% of Republicans overall, and just 14% of Republicans who would support his father in a primary election. Ron DeSantis and Mike Pence are the candidates who stand to benefit the most without the former president on the ballot, earning 29% and 21% of Republicans’ support, respectively. Ted Cruz (10%) is the only other candidate with double-digit support. The 2024 GOP Primary becomes murkier without the former president on the ballot, as the share of those unsure whom to support nearly doubles from 9% Unsure with Trump on the ballot to 16% Unsure without him.

“As Don Jr.’s performance shows, there is something about former President Trump that Arizona Republicans like more than just the name Donald Trump,” said Joss.

Methodology: This poll was conducted as an online opt-in panel survey. The survey was completed by OH Predictive Insights from November 1st to November 8th, 2021, from an Arizona Statewide Registered Voter sample. The sample demographics were weighted to accurately reflect the registered voter population by gender, region, age, party affiliation, ethnicity, and education according to a recent voter file derived from the Arizona Secretary of State’s Office and recent Census data. The sample size was 713 registered voters in Arizona, with a MoE of ± 3.7%. The sample of registered voters also contained a subsample of 252 respondents who self-identified as being registered members of the Republican party. This subsample has a MoE +/- 6.2%. Numbers may not equal 100% due to rounding.