Governor’s Race: Too Close to Call

Governor’s Race: Too Close to Call

Lake Holds 3-Point Lead over Hobbs; One in 10 Voters Still on the Fence

Although the survey results show a statistical tie between the two gubernatorial candidates, Lake holds a narrow lead over Hobbs with 47% of likely voters in support of the Trump-endorsed candidate, and 44% in support of Hobbs.

“With less than a month left until Election Day, this race is in full swing,” said Mike Noble, OHPI Chief of Research. “With Lake’s lead over Hobbs within the margin, it will be a battle to the end as to who will champion at the ballot box.”

Taking a deeper look into who is pushing the candidates to their current position, most demographic subgroups are following patterns from previous elections. Lake has a higher level of support among men and residents of rural counties, while Hobbs gains more traction among women and residents of Pima county.

However, a few demographics are not behaving as they have traditionally, a trend that is benefiting both Republicans and Democrats. Independents, who have tended to lean to the right in the pre-Trump era, have put Hobbs +6 (46% to 40%) among their party. Another interesting demographic that is showing a change in pace are Hispanic/Latino voters – a more reliably blue demographic pre-Trump – who are evenly split between Lake and Hobbs (44%). 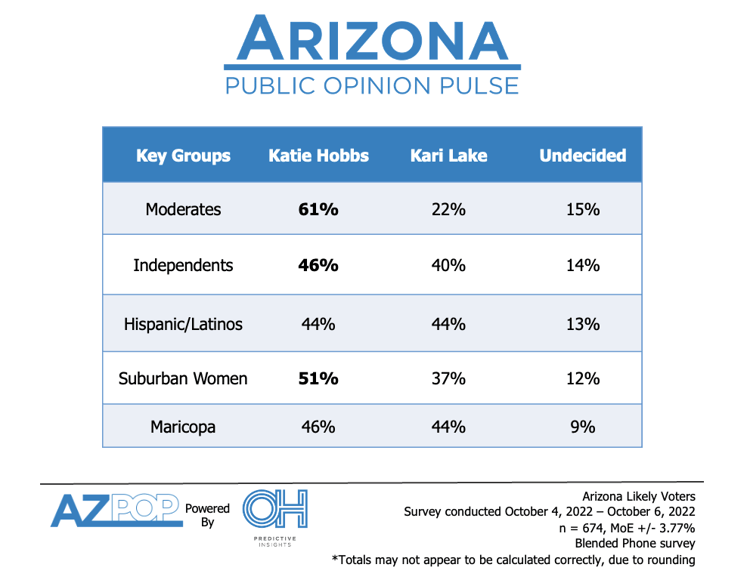 “In Arizona’s political climate this past year, we have seen some of these key voter blocs have a real impact on which way the election swings, and it is clearly no different for the Governor’s race,” said Noble. “Each candidate has their reliable voters, but it is these all-important demographics – as well as the undecideds – who will make the final call come November.”

Due to the high volume of campaign ads from both candidates saturating broadcast media and traffic intersections in Arizona, they are equally well known with more than 9 in 10 voters saying they have heard of Hobbs and Lake (93%, 95% respectively). However, perceptions of the two are not as encouraging. Arizona likely voters are equally divided in their opinions of both candidates with Lake’s net favorability at +/- 0, and Hobbs’ net favorability at -1.

Methodology: This poll was conducted as a Blended Phone survey utilizing Live Callers, Peer-to-Peer Text, and IVR. Respondent phone-type 60% cell and 40% landline.  The survey was completed by OH Predictive Insights from October 4th to October 6th, 2022, from an Arizona Likely General Election Voter sample. The sample demographics were weighted to accurately reflect gender, region, age, ethnicity, party affiliation, and education based on the most recent U.S. Census estimates and the most current Arizona Secretary of State voter file – the exact percentages can be found in the table below. The sample of 674 Likely Voters yielded a MoE of ± 3.77%. *Numbers may not equal 100% due to rounding.