PHOENIX (May 31st, 2022)- In Arizona’s open race for Governor, Republicans are faced with a seemingly wide-open primary to replace term-limited Gov. Doug Ducey. Yet, the Democratic side of the race has been relatively uneventful, reinforced in the latest Arizona Public Opinion Pulse (AZPOP) survey by OH Predictive Insights (OHPI).

Note: The data within this release is a likely voter sample rather than a registered voter sample – only including voters who have been qualified as likely to vote in upcoming elections – of Arizona Democrats. As the primaries draw nearer, having a drilled-down look at the current share of the electorate that we’re most likely to see at the ballot box is crucial for accurate and representative data and insights.

This AZPOP was conducted from May 9th – May 16th, 2022 and surveyed a statistically significant sample of 261 registered Democrats in Arizona who qualified as likely voters, yielding a margin of error of ± 6.07%.

“Democrats in Arizona seem to have avoided a bruising and contentious primary thus far – a positive sign in an otherwise grim national environment for the party,” said Mike Noble, OHPI Chief of Research.

With the support of nearly 2 in 5 likely Democratic voters, current Secretary of State Katie Hobbs maintains a wide lead in her primary as her opponents continue lagging below ten percent. However, there are still 40% who remain undecided.

As of the May AZPOP survey, 43% of likely Democratic voters say they would vote for Hobbs, who gained national prominence as she oversaw Arizona’s razor-thin presidential race in 2020. Her opponents – former Nogales Mayor Marco Lopez and state lawmaker Aaron Lieberman – are polling at 9% and 8%, respectively. 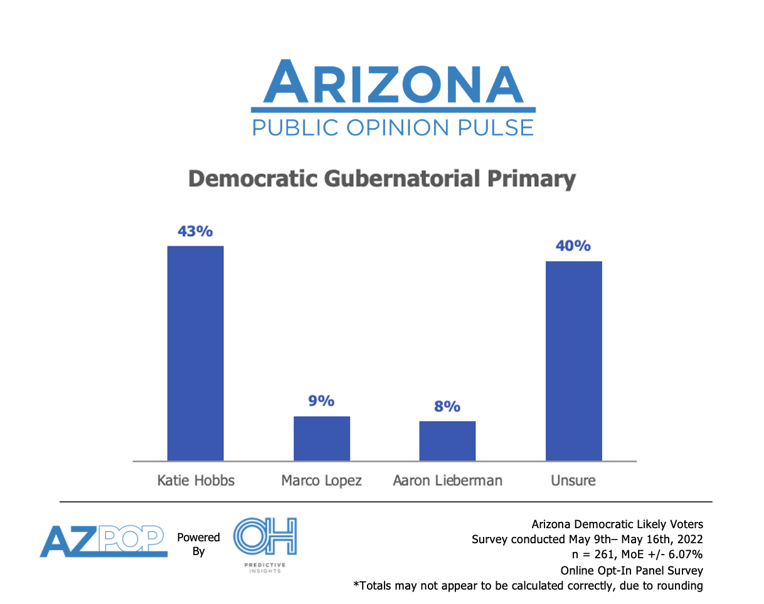 Since the January AZPOP, there have been no statistically significant movements in Arizona’s Democratic Governor Primary.

“With no significant movement in months and the primary election just a couple months away, the 2 in 5 undecided voters will certainly decide this race’s outcome,” said Noble.

Methodology: This poll was conducted as an online opt-in panel survey. The survey was completed by OH Predictive Insights from May 9 to May 16, 2022, from an Arizona Statewide Registered Voter sample. The sample demographics were weighted to accurately reflect the likely Arizona Democrat Primary voter population by gender, region, age, party affiliation, and ethnicity. The sample size was 261 registered Democrats in Arizona who qualified as likely voters, with an MoE of ± 6.07%. Numbers may not equal 100% due to rounding.