PHOENIX (September 28, 2021)- The 2022 general election may be 406 days away, but we are beginning to get a clearer look at just who will be competing in some of Arizona’s top races. According to OH Predictive Insights’ (OHPI) latest Arizona Public Opinion Pulse (AZPOP) survey, each party has a leading candidate for next year’s gubernatorial election, but meaningful shares of the electorate are still undecided.

Republican Governor Doug Ducey is unable to run for a third term due to term limits, which means Arizona voters will be tasked with electing his successor next November. But before they can do that, each party must first choose its nominee.

Six major Republicans have jumped into the GOP’s Governor’s Primary to date, but our survey finds only one candidate with double-digit support from GOP primary voters: former FOX 10 News anchor Kari Lake, who currently enjoys the support of 25% of Republican primary voters. Former U.S. Representative Matt Salmon, who represented the East Valley for over two decades and was the party’s gubernatorial nominee in the 2002 election, is in a distant second place with 9%. State Treasurer Kimberly Yee, the state’s first Asian-American statewide elected official, is at 6%. All other candidates are at 5% or less, while more than half (53%) of GOP primary voters have yet to commit to a candidate. 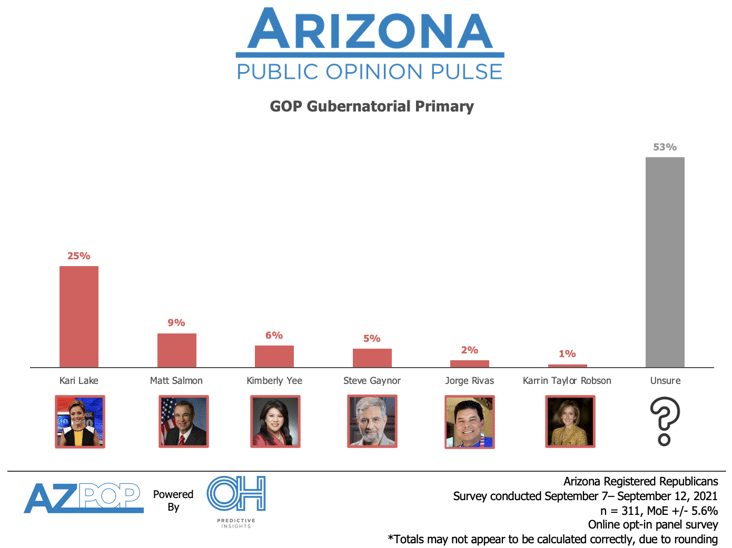 Meanwhile in the Democratic Governor’s Primary, Secretary of State Katie Hobbs remains in the driver’s seat: 40% of Democratic voters say that they plan to support Hobbs in the primary. Two other candidates – former Nogales Mayor Marco Lopez and former State Representative Aaron Lieberman – are challenging Hobbs for the Democratic nomination. They are currently polling at 10% and 8%, respectively. 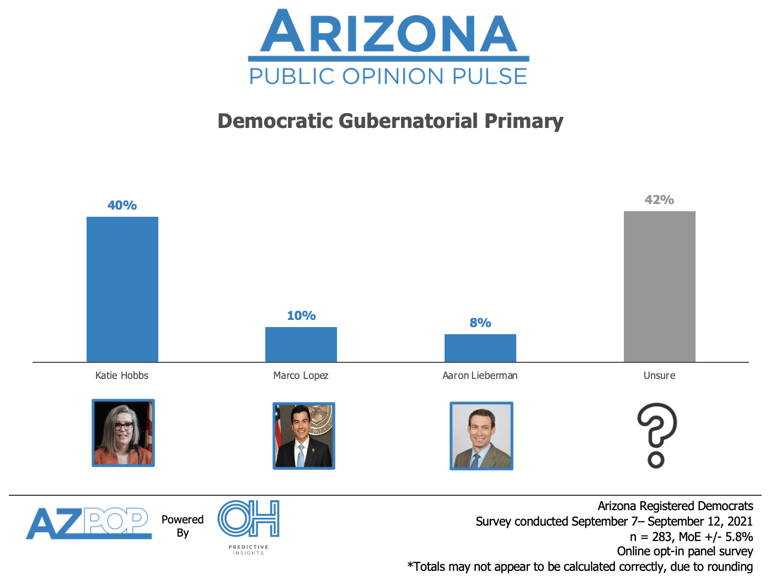 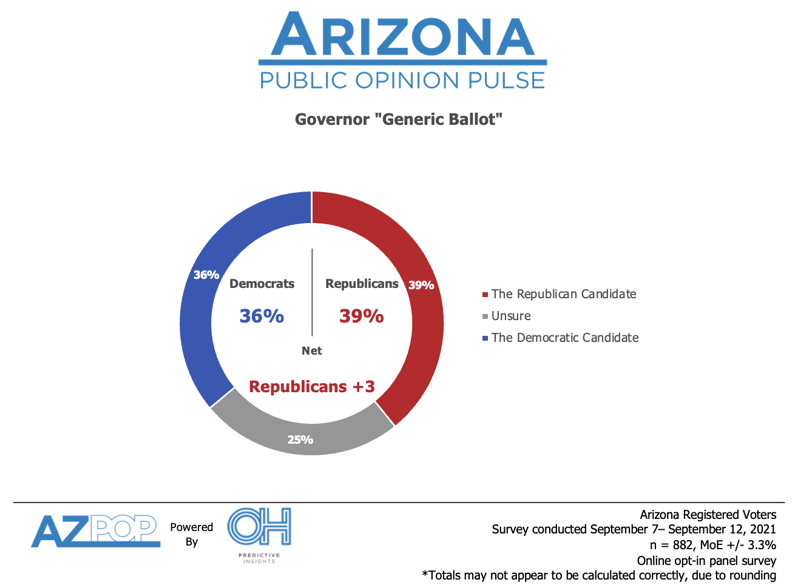 “In the ramp-up to the Governor’s race, the leading Republican and Democratic candidates’ first hurdle is to cross the 50% threshold and hold that support until next November,” said Mike Noble, OHPI Chief of Research. “However, with such a split in voters’ preference for a Republican or Democratic candidate, winning over Arizona’s fast-growing Independents will be key to securing the majority vote for Governor.”

As has been the case in recent Arizona elections, candidates and outside groups from both parties are going to blanket the Arizona airwaves with advertisements trying to sway the evenly split Governor’s race. AdImpact, a group that tracks spending on political advertisements, has projected that $168 million will be spent in Arizona on the gubernatorial race alone. This eye-wateringly high number makes the race to replace Governor Ducey the 2nd most expensive gubernatorial campaign in the country next year (Georgia is projected to be the most expensive at $235 million).

Though the Secretary of State has become one of the most prominent elected offices in the state, the 2022 election to replace Secretary Hobbs has so far turned out to be a snooze-fest as voters have yet to pay more attention to down-ballot elections.

In the Republican Primary for Secretary of State, a whopping three quarters are unsure which candidate they will support when they choose a nominee in August next year. The GOP Primary so far includes three state legislators: State Representatives Shawnna Bolick and Mark Finchem, and State Senator Michelle Ugenti-Rita. Though the field is largely muddled, Finchem is currently polling the highest with 11% support, followed by Ugenti-Rita’s 8% and Bolick’s 7%.

Note: Mark Finchem was endorsed by Donald Trump in the Republican Primary for Arizona Secretary of State on Monday, September 13th, 2021. This survey was in the field until Sunday, September 12th, so any effect the former-President’s endorsement may have had will not be represented these numbers.

The two-candidate Democratic Primary could also be very volatile: 3 in 5 Democrats have not yet decided who they will support. Former Maricopa County Recorder Adrian Fontes is currently polling at 22%, followed by State Representative Reginald Bolding’s 17%.

“With well over half of each party’s electorate yet to make up their minds, Fontes’ and Finchem’s slight leads are statistically meaningless,” said Jacob Joss, Data Analyst at OHPI. “But, with less than a year until the Secretary of State primaries, candidates would be wise to optimize their campaign resources to start chipping away at these large chunks of undecideds.”