Kelly Leads in All Head-To-Head Matchups

Kelly Leads in All Head-To-Head Matchups


PHOENIX (September 30, 2021)- When Democratic U.S. Senator Mark Kelly was elected last November, he faced a rather unique position than most of his other freshman colleagues: U.S. Senators are normally elected to six-year terms, but Kelly – who won a special election to finish the late-Sen. John McCain's term – would have to face voters once again in two years for a fresh six-year term. According to OH Predictive Insights’ (OHPI) latest Arizona Public Opinion Pulse (AZPOP) survey, Senator Mark Kelly is leading the pack in all head-to-head matchups.

This Arizona Public Opinion Pulse (AZPOP) survey was conducted September 7th – September 12th, 2021 and surveyed 882 registered voters in Arizona and had a margin of error of +/- 3.3%.

While we are still more than a year out from the 2022 election, the Republican primary to take on Senator Kelly is beginning to take shape. National and state Republicans listed Kelly as a top 2022 target almost immediately after his victory. As such, several Republicans began making moves to challenge him. So far, the GOP candidates include Attorney General Mark Brnovich, retired Air Force Major General Michael McGuire, and businessmen Blake Masters and Jim Lamon. Among Republican Primary voters, Brnovich leads with double-digit support (27%), followed by McGuire in second with 14%. Both Masters and Lamon are polling at 6% and 3%, respectively. 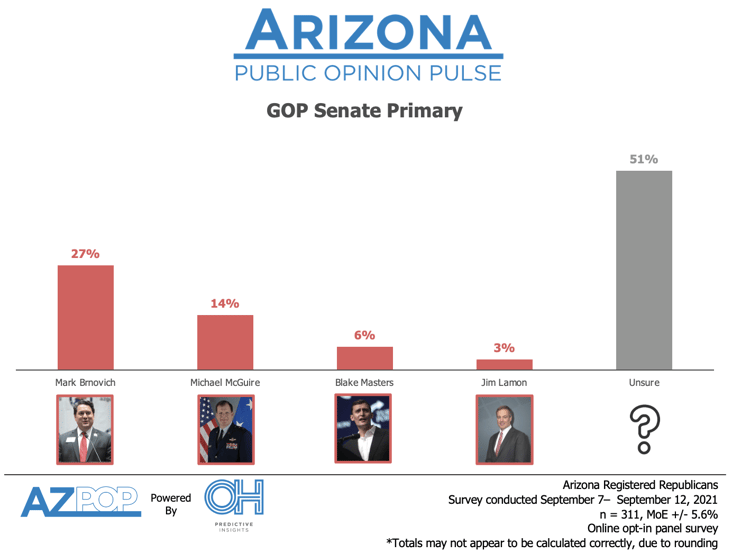 Though Brnovich holds support from just over one quarter of Republican voters, the race could still be anyone’s to win: 51% of Republican voters have yet to say who they will support. Former President Donald Trump, whose endorsement has proven to be quite powerful in the Republican primaries, has not yet taken a side in this primary – which could drastically change the entire landscape of the race should he decide to weigh in.

"The bottom line: Brnovich is in a strong position right now, but the race is far from locked down given more than half of Republicans are undecided on who they will vote for," said Mike Noble, OHPI Chief of Research.

With 13 months left to go until the general election, Kelly finds himself in a comfortable position, leading all four Republican candidates in potential head-to-head matchups. Against Brnovich, Senator Kelly currently leads 43% to 39%. Kelly leads McGuire 44% to 37%, Lamon 43% to 36%, and Masters 44% to 35%. 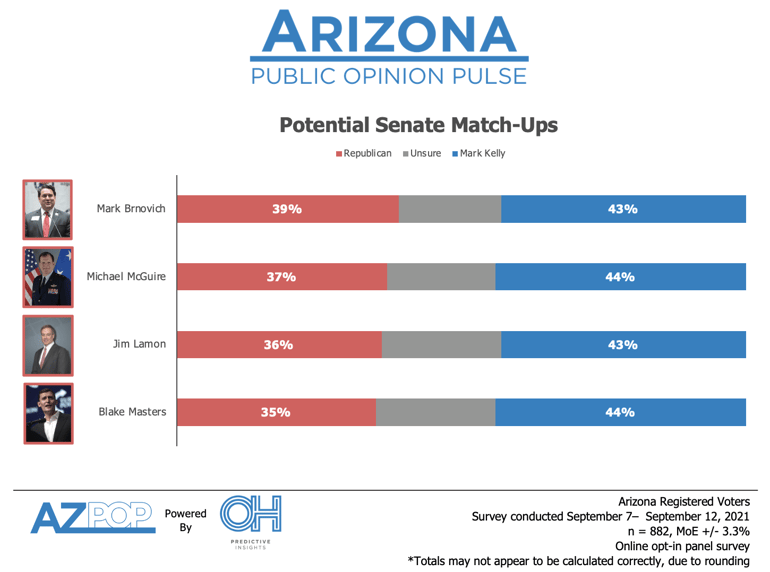 It is worth pointing out that Senator Mark Kelly does not poll above 45% against any of his potential rivals. “Evidently, Kelly is attempting to keep a low profile in an off-year while his opponents try to build up name recognition – a strategy that seems to be working, at least for now,” said Mike Noble.

Kelly enters the final months of the year with an overall net positive favorability rating of +4%. Forty-seven percent of voters hold a favorable view of the freshman Senator, while 43% view him unfavorably. In the newly minted battleground state of Arizona, Independent voters could be the deciding voters. Kelly’s numbers are evenly split among Independents with 43% viewing him favorably and 42% unfavorably. His numbers among partisans align with what one might expect: nearly 4 in 5 Democrats view him favorably and roughly three quarters of Republicans view him unfavorably. 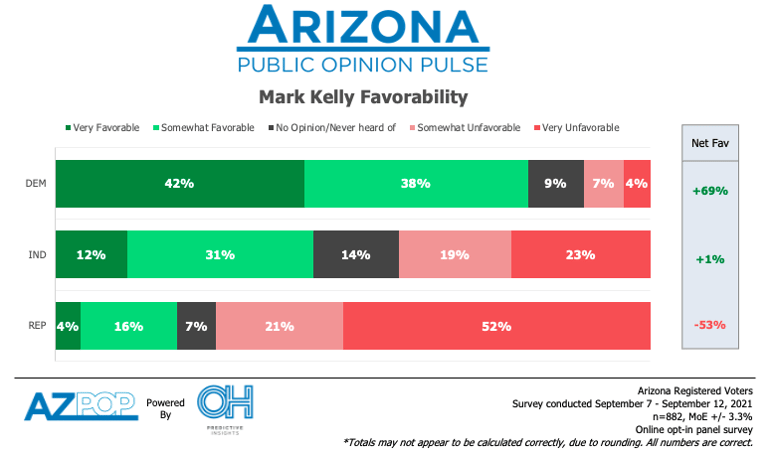 “It's interesting to see how different the coalitions of support for Arizona's two Democratic senators are," said Mike Noble. "Kelly is more of a 'rank and file' Democrat with high favorability among his own party, as compared to Sinema whose coalition is more diverse with crossover support."

Though she will not be on the ballot again for another three years, Senator Kyrsten Sinema’s favorability ratings continue to be quite interesting. Overall, 46% of Arizona voters view her favorably while 39% view her unfavorably. Results of this survey found that Sinema enjoys support (and opposition) in places that you wouldn’t necessarily predict for a swing-state Democratic Senator.

Kyrsten Sinema’s opposition to progressive priorities such as a $15/hour minimum wage and filibuster reform appear to be impacting her numbers among Democratic voters. "Kyrsten Sinema still has plenty of time to turn these numbers around, but make no mistake: a 30% unfavorable rating from voters in your own party is not the ideal place for a Senator be," said Jacob Joss, Data Analyst at OH Predictive Insights. "Numbers like that could potentially open the door for primary challengers."

“In comparing favorability ratings of Arizona’s two Democratic Senators, it is interesting to see how unfavorable Sinema is among her own party. With three years left until her next election, Sinema has plenty of time to win over these Democrats - and more importantly, the vital vote of Independents,” said Jacob Joss.