Lake and Hobbs are Early Front Runners to Replace Ducey

Lake and Hobbs are Early Front Runners to Replace Ducey

Brnovich and McGuire are Strong Contenders to Take on Kelly

PHOENIX (August 2nd, 2021)- As Arizona gears up for another election season at the center of the national political debate – its third in a row, for those keeping score at home – the races for a number of different statewide offices are heating up, according to a new survey conducted by OH Predictive Insights (OHPI). As the fields for Arizona’s Governor’s seat, a Senate seat, and other statewide offices take shape, neither party has an obvious advantage. Though 43% of voters prefer Republicans run the state, an equal number (42%) think Democrats would do a better job.

This Arizona Public Opinion Pulse (AZPOP) survey was conducted July 6th – July 11th, 2021 and surveyed 863 registered voters in Arizona and had a margin of error of +/- 3.3%. 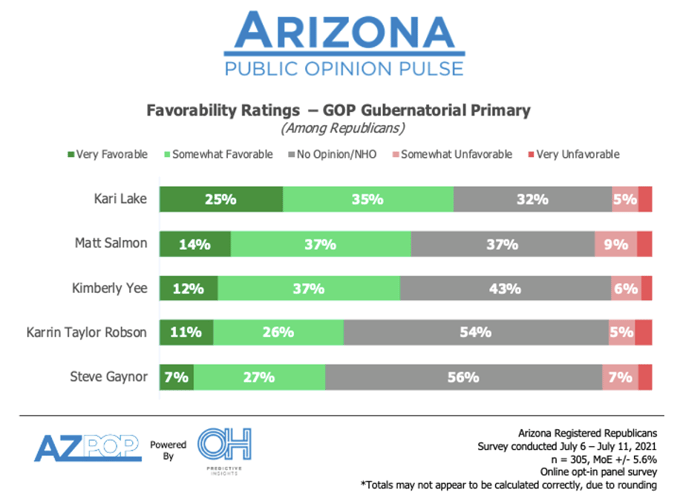 “It turns out Kari Lake’s decades of being on local television, Matt Salmon’s decades of experience in Arizona politics, and Kimberly Yee’s status as a current statewide officeholder have been major benefits to their name ID,” said OHPI Data Analyst Jacob Joss. “Who would have thought?”

Turning to the Democratic Primary, Secretary of State Katie Hobbs has used the national platform provided to her by the Maricopa County Presidential Election Audit to give her an edge over her two announced primary opponents. Three-quarters (74%) of Arizona Democrats have formed an opinion of the Secretary of State, compared to just 54% for either Former Nogales Mayor Marco Lopez or Arizona State Representative Aaron Lieberman. 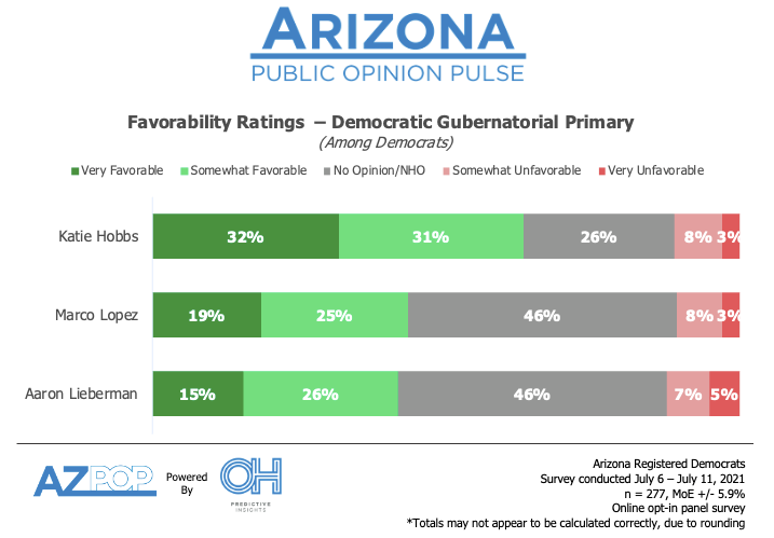 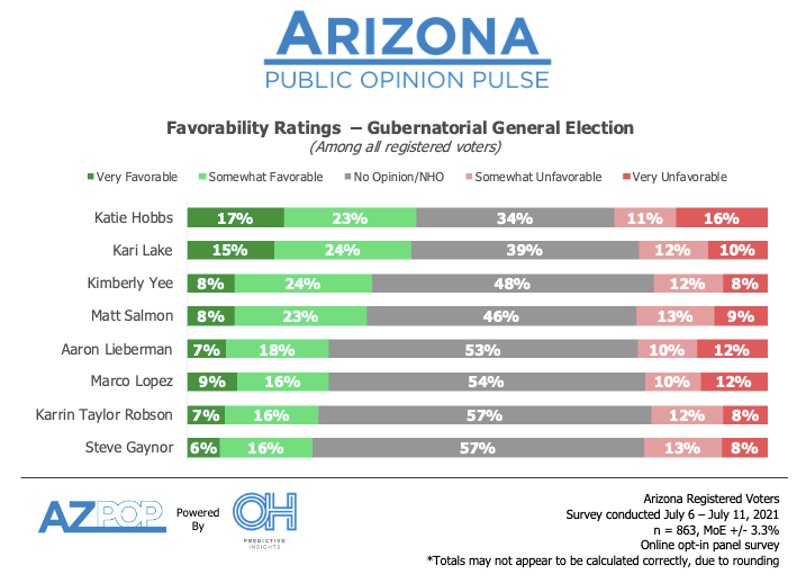 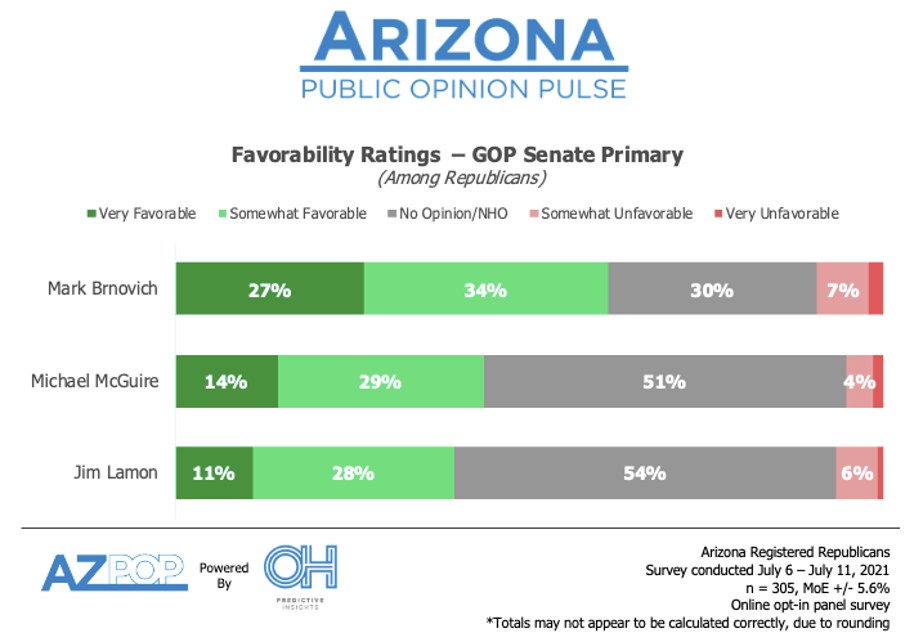 When Mark Kelly is added to the mix and we turn from the GOP primary electorate to all registered voters, Kelly’s incumbency looks a bit shakier. Though Kelly has the highest favorability rating among the foursome (50%), he also has the highest unfavorable numbers as well (40%). 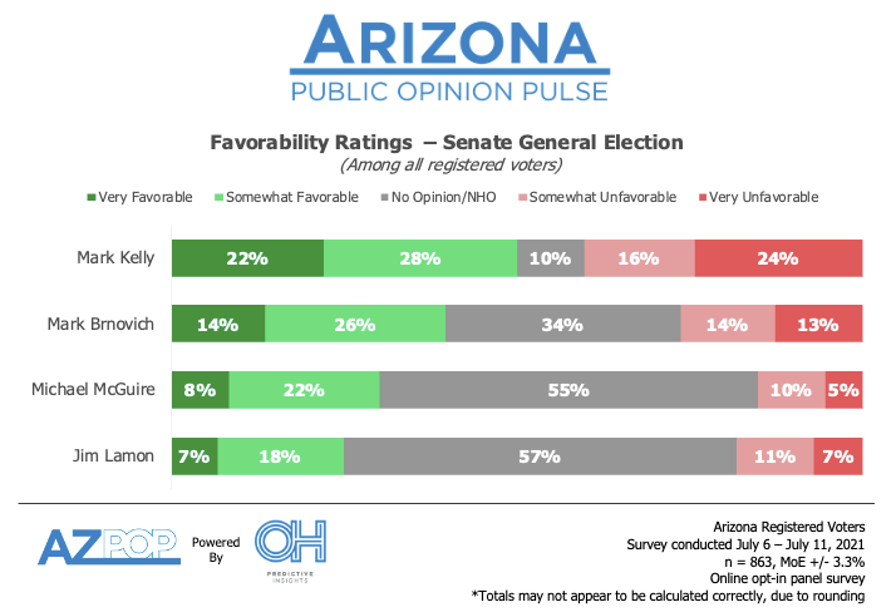 “Although Mark Kelly is not in as safe as a position as he might like, with more than one year until the general election and an enormous campaign war chest, he has the time and resources to improve his numbers – or damage his opponents,” said Joss.

Note: Blake Masters announced his candidacy for US Senate after July’s AZPOP deployed, therefore his name was not included in this poll. His absence was not intentional, and we do plan to include him in the future.

Two Democrats and two Republicans have announced their candidacies to replace Katie Hobbs, but no one on either side is standing out from the pack among registered voters at this point in the campaign. Less than half of the electorate has heard enough of any of the currently announced candidates to have formed an opinion of them.

Note: Shawnna Bolick announced her candidacy for Arizona Secretary of State just after the survey script for July’s AZPOP was finalized, and her name was not included in this poll. Her absence was not intentional, and we do plan to include her in the future. 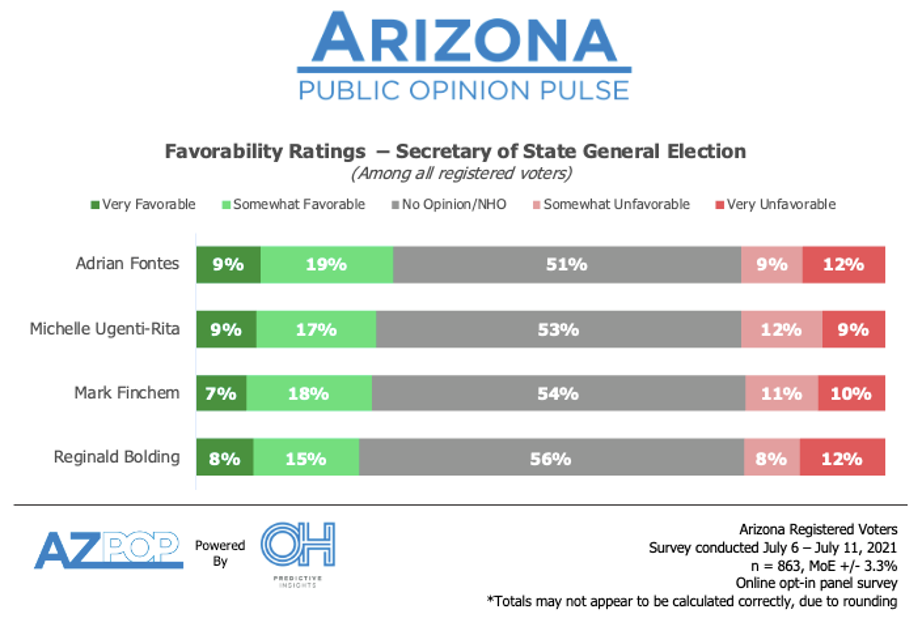 Methodology: This poll was conducted as an online opt-in panel survey. The survey was completed by OH Predictive Insights from July 6th to July 11th, 2021, from an Arizona Statewide Registered Voter sample. The sample demographics were weighted to accurately reflect the registered voter population by gender, region, age, ethnicity, and education according to a recent voter file derived from the Arizona Secretary of State’s Office and recent Census data. The sample size was 863 registered voters in Arizona, with a MoE of ± 3.3%. Numbers may not equal 100% due to rounding.