Lake Placid, Salmon on the Rise

Lake Placid, Salmon on the Rise

PHOENIX (January 27th, 2022)- For several months, Trump-backed Kari Lake has held the lead in the Republican primary for Arizona’s Governor; but, according to the latest Arizona Public Opinion Pulse (AZPOP) conducted by OH Predictive Insights (OHPI), Lake’s lead has begun to narrow in the new year. Meanwhile, Secretary of State Katie Hobbs remains the clear frontrunner for the Democratic nomination.

Regardless of her coveted endorsement from former President Donald Trump, Kari Lake is struggling to bring new voters into her camp, stalling her lead; support for Lake has seen no statistically meaningful growth in the last three consecutive AZPOP surveys (spanning from September 2021 to January 2022).

January’s AZPOP survey has the former FOX10 anchor at 21%, which is a 7-point decrease from November’s AZPOP. Up by 6 points from November, former Congressman Matt Salmon is hot on Lake’s heels at 17%. No other candidate breaks double-digit support. With a whopping 46% of voters still undecided and election day still several months away, the race for the GOP nomination for Arizona Governor is still very much up for grabs. 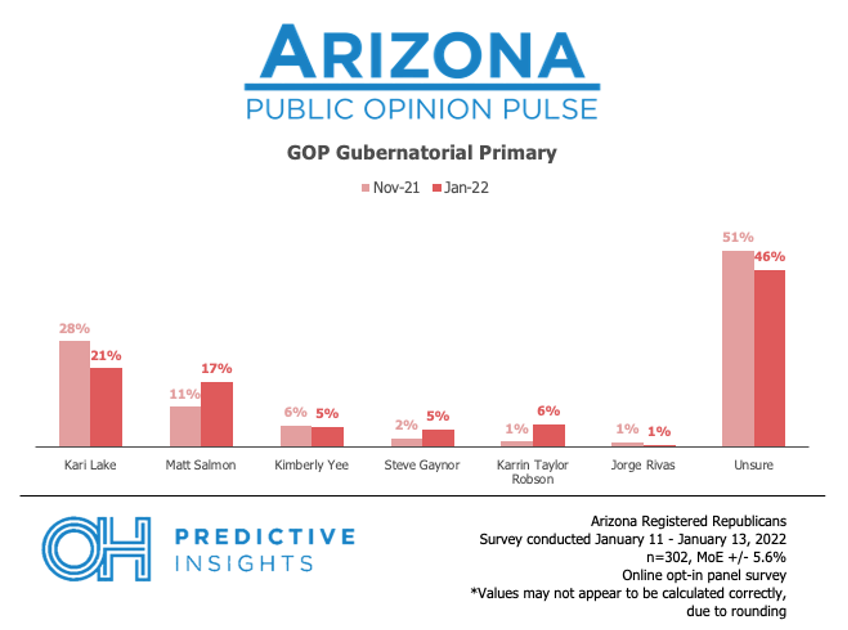 *Note: Kimberly Yee dropped out of the gubernatorial race after this survey had already deployed

“We’re finally starting to see some movement in Arizona’s GOP Governor Primary; Lake’s support is lolling while Salmon is swimming upstream,” said Mike Noble, OHPI Chief of Research. “However, remember to keep an eye on cash-flush Karrin Taylor Robson – ramping up her finances and TV/radio appearances optimizes opportunities for Taylor Robson to distinguish herself ahead of August’s election.”

Republican voters appear to be having a difficult time making an ideological distinction between the two frontrunners. Half (49%) of GOP voters are unsure who is more conservative, while one in five (22%) say that Lake is the most conservative and 12% say the same of Salmon.

After concluding two trials and making a public apology on Twitter, Secretary of State Katie Hobbs seems to be doing just fine in the midst of her discrimination controversy. OHPI’s new survey finds that Hobbs is still leading her primary with near-majority (46%) support from Arizona Democrats. Former Nogales Mayor Marco Lopez (9%) and State Rep. Aaron Lieberman (5%) follow miles behind Hobbs in second and third place, respectively.

However, this far out from election day, a majority of Grand Canyon State voters (52%) say they have not yet heard about Katie Hobbs’ involvement in the discrimination lawsuit. In total, 35% say they have.

“Hobbs supporters may be saying ‘so far, so good’ as her polling numbers appear to be unaffected by her discrimination debacle; but the fact is, most voters haven’t had a chance to form an opinion on the controversy due to their lack of awareness – and there’s still time for that before E-Day,” said Mike Noble. “Challengers are sure to take advantage of this free, anti-Hobbs ammo, so she will have to armor up with carefully crafted campaign messaging and work to minimize self-inflicted political wounds.” 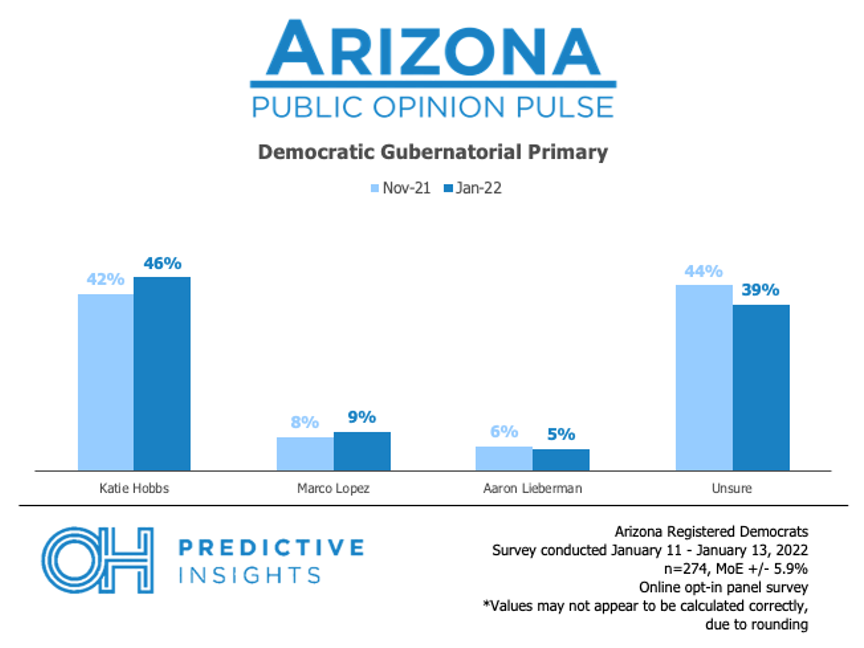 While Arizona’s Primaries may not have taken place yet, gauging voter sentiment via the AZPOP can provide insight into how voters are feeling ahead of elections. According to January’s survey, Republicans have a slight edge in a generic match-up. If the race for governor were to take place today, 39% of Arizona voters say that they would support the Republican candidate, while 35% would support the Democratic candidate. One quarter (26%) of voters are unsure. The race will almost certainly be decided by the small but all-important share of Independent voters, with 45% of them saying that they are unsure which party they will support.

“Keep an eye on Arizona’s Independents – as the bulk of ‘undecideds,’ it is likely that non-party-loyal voters will end up calling the shots in this year’s midterms,” said Noble.

Methodology: This poll was conducted as an online opt-in panel survey. The survey was completed by OH Predictive Insights from January 11th to January 13th, 2022 from an Arizona Statewide Registered Voter sample. The sample demographics were weighted to accurately reflect the registered voter population by gender, region, age, party affiliation, ethnicity, and education according to a recent voter file derived from the Arizona Secretary of State’s Office and recent Census data. The sample size was 855 registered voters in Arizona, with a MoE of ± 3.4%. Numbers may not equal 100% due to rounding.