The Silver State an Unlikely Birthplace for another “Texas Heartbeat Act”

PHOENIX (October 22nd, 2021)- Discussion surrounding the hot-topic of abortion has been buzzing in the US since the “Texas Heartbeat Act” came into effect as law in September, amplifying the decades-long debate across state lines. Recent public opinion polling by OH Predictive Insights (OHPI) finds that attitudes of Nevada voters are similar to those of Arizona voters when it comes to abortion issues. According to OHPI’s latest Nevada Public Opinion Pulse (NVPOP) survey, most Nevada voters lean pro-choice (69%) over pro-life (31%).

The NVPOP is a statewide survey that provides regular updates on the moods, perceptions, and opinions of Nevadans on hot topics facing the state. This NVPOP was conducted October 5th – October 12th, 2021 and surveyed 770 registered voters in Nevada, giving the survey a margin of error of +/- 3.5%.

Among Nevada voters, the groups that make up meaningful shares of pro-life supporters include self-identified conservatives (47%), Republicans (46%), and Hispanic/Latinos (42%). While these groups are driving forces behind the coalition of pro-lifers within Nevada’s electorate, it is worth noting that more than half of each group above identifies as pro-choice. 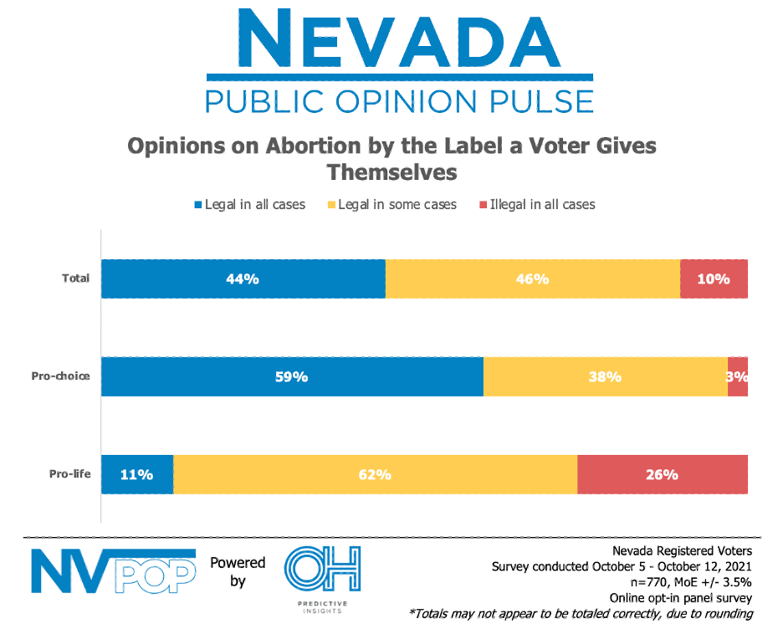 “Similar to the sentiment seen in Arizona regarding abortion, pro-lifers in Nevada lean moderate in terms of their abortion stances,” said Mike Noble, OHPI Chief of Research. “The data from this survey tells us that in Nevada, pro-life is not necessarily synonymous with anti-abortion.”

Context: The “Texas Heartbeat Act” signed into law by Governor Greg Abbott prohibits Texas abortion procedures once cardiac activity in the embryo is detected - as early as six weeks into a pregnancy. This bill permits for private citizens – even non-Texas residents – to sue abortion providers, staff, or anyone involved in the transportation to get an abortion. 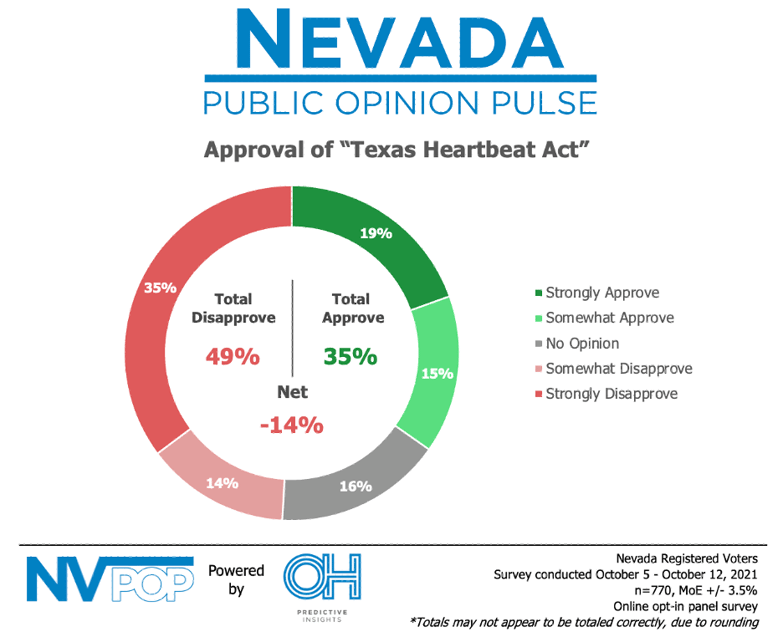 Methodology: This poll was conducted as an online opt-in panel survey. The survey was completed by OH Predictive Insights from October 5th to October 12th, 2021, from a Nevada Statewide Registered Voter sample. The sample demographics were weighted to accurately reflect the registered voter population by gender, region, age, party affiliation, ethnicity, and education according to a recent voter file derived from the Nevada Secretary of State’s Office and recent Census data. The sample size was 770 registered voters in Nevada, with a MoE of ± 3.5%. Numbers may not equal 100% due to rounding.

About the NVPOP: The Nevada Public Opinion Pulse (NVPOP) survey is a statewide survey of a base sample of 800 – 1,000 general population state residents (18+ YO) with a statistically significant sample size of registered and likely voters included. Deploying surveys on a quarterly basis, we are able to gauge and keep an accurate and consistent pulse on the perceptions, opinions, and future decisions of state residents on a number of relevant issues and pressing topics for corporate and political insights. With statewide Public Opinion Pulses also conducted in Utah and Arizona, our surveys allow data-seekers to look through the 3 unique lenses of general population residents, registered voters, and likely voters in each state for insights most relevant to them. To learn more about our statewide public opinion surveys and for information on how to purchase customized questions to add to our surveys, click here.