PHOENIX (October 28, 2021)- One of the first major foreign policy moves of the Biden Administration was the President’s decision to withdraw US troops from Afghanistan. Biden has since faced heavy criticism for the withdrawal with accusations of the process being poorly coordinated. Recent polling by OH Predictive Insights (OHPI) finds that opinions of Nevada voters are similar to those of Arizona voters when it comes to the Afghanistan evacuation and Biden’s job approval. According to OHPI’s latest Nevada Public Opinion Pulse (NVPOP) survey, most Nevada voters (57%) disapprove of how President Biden handled the situation in Afghanistan.

The NVPOP is a statewide survey that provides regular updates on the moods, opinions, and perceptions of Nevadans on hot topics facing the state. This NVPOP was conducted October 5th – October 12th, 2021 and surveyed 770 registered voters in Nevada, giving the survey a margin of error of +/- 3.5%. 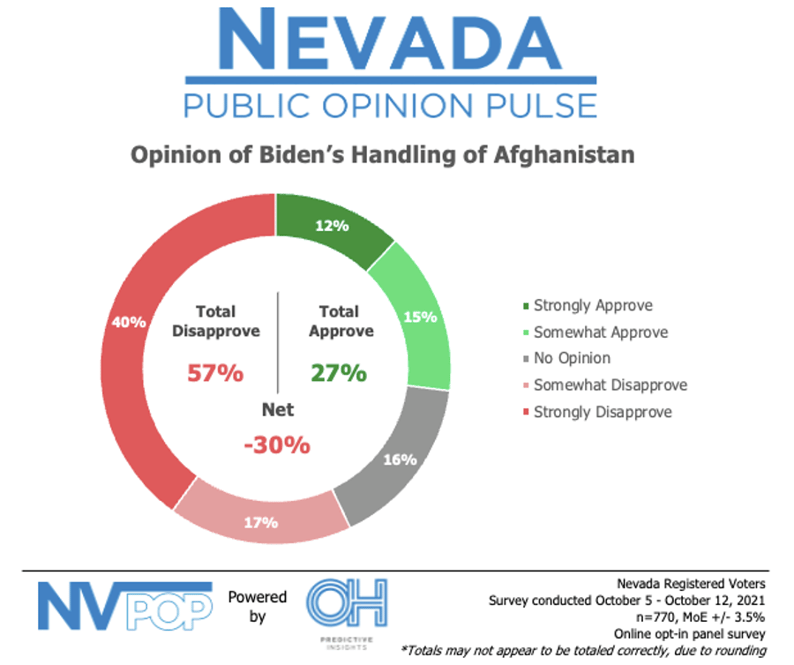 Biden’s Handling of the Afghanistan Withdrawal

While the majority of Nevada voters disapprove of Biden’s handling of the Afghanistan situation, they also broadly agree that it was time for one of America’s longest wars to come to an end. In total, nearly three quarters agree that the US was right to leave Afghanistan, but it is worth pointing out that 57% of voters believe that the withdrawal could have been handled in a more orderly manner. Only 15% believe that the withdrawal was handled in as orderly a manner as possible.

“In one of the nation’s perennial battleground states, it is no surprise that voters in Nevada are split on President Biden’s job approval,” said Mike Noble, OHPI Chief of Research.

The survey found that 44% of Silver State voters approve of the job President Biden is doing, compared to 49% who disapprove. An examination of the partisan breakdown reveals few surprises: 4 in 5 Democrats approve of the job Biden is doing, compared to nearly nine-in-ten Republicans who disapprove. However, his numbers with Independents leave much to be desired, especially in a state where neither major political party makes up a majority of registered voters. Thirty-eight percent of Independents give the President their approval, compared to 50% who disapprove of his performance on the job so far.

President Biden’s 44% approval rating among the Nevada electorate is an overall decline from OHPI’s last NVPOP survey conducted in July, where 50% of voters approved of the job the President was doing. Much of this decline is powered by worsening numbers among women and younger voters. In July, 52% of women voters approved of the job Biden was doing, compared to 43% in October. Also, in July, 55% of voters under the age of 55 approved of Biden’s performance, compared to 44% in the October NVPOP.

“Similar to the sentiment seen in Arizona regarding Biden’s handling of Afghanistan, Nevadans’ disappointment of how the situation was handled is reflected in his approval ratings,” said Mike Noble, OHPI Chief of Research. “However, even with ground to make up among the all-important Independents, Biden still has time to save face with Nevada’s electorate before his down ticket impact is felt in the upcoming midterm elections.”

Methodology: This poll was conducted as an online opt-in panel survey. The survey was completed by OH Predictive Insights from October 5th to October 12th, 2021, from a Nevada Statewide Registered Voter sample. The sample demographics were weighted to accurately reflect the registered voter population by gender, region, age, party affiliation, ethnicity, and education according to a recent voter file derived from the Nevada Secretary of State’s Office and recent Census data. The sample size was  770  registered voters in Nevada, with a MoE of ± 3.5%. Numbers may not equal 100% due to rounding.

About the NVPOP: The Nevada Public Opinion Pulse (NVPOP) survey is a statewide survey of a base sample of 800 – 1,000 general population state residents (18+ YO) with a statistically significant sample size of registered and likely voters included. Deploying surveys on a quarterly basis, we are able to keep an accurate and consistent pulse on the perceptions, opinions, and future decisions of state residents on a number of relevant issues and pressing topics for corporate and political insights. With statewide Public Opinion Pulses also conducted in Arizona and Utah, our surveys allow data-seekers to look through the 3 unique lenses of general population residents, registered voters, and likely voters in each state for insights most relevant to them. To learn more about our statewide public opinion surveys and for information on how to purchase customized questions to add to our surveys, click here.