Midterm Check-In: Everything is Tight

Midterm Check-In: Everything is Tight

GOP Leads with Suburban Voters, Dems Up with Indies

PHOENIX (March 24th, 2022)- While many continue to process – and litigate – the fierce 2020 election, others are looking ahead to the 2022 midterms. Every statewide office and U.S. House seat will be up for grabs, and Senator Mark Kelly will be asking voters for a full six-year term.

Many recent OH Predictive Insights (OHPI) surveys have suggested that several races up and down the ballot will be decided by razor-thin margins. The March Arizona Public Opinion Pulse (AZPOP) survey was no exception. This AZPOP was conducted March 7th, 2022 – March 15th, 2022 and surveyed 753 Arizona registered voters, giving the survey a margin of error of +/- 3.6%. 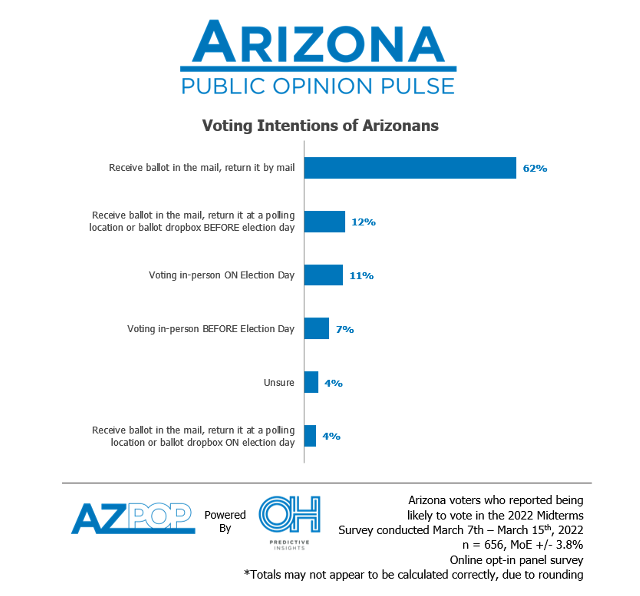 “As seen in our previous survey release, Arizona voters are leaning deeper into their preferences for voting by mail, and this year’s midterm elections will be no exception with 3 in 5 Arizonans planning to vote entirely by mail,” said Mike Noble, Chief of OHPI Research.

Governor: Republican Gov. Doug Ducey is ineligible to run for re-election due to term limits, which means that Arizona voters will be picking his successor this November. The generic gubernatorial ballot remains tight with a statistical tie between Republicans (39%) and Democrats (37%).

Senate: The generic Senate ballot is also a dead heat as Sen. Mark Kelly (D) awaits his Republican rival. Republicans are currently at 39%, while Democrat Mark Kelly is at 37%. Don’t expect Kelly to know who he’ll be facing any time soon: Arizona’s primary elections aren’t until August.

Congress: Arizona’s congressional map was recently redrawn as part of the decennial redistricting process, which resulted in several new competitive districts. With Democrats clinging to a narrow majority in the House, it’s becoming clear that Arizona will be ground zero in the fight for the majority. Democrats and Republicans are tied at 37% apiece in the generic congressional ballot. 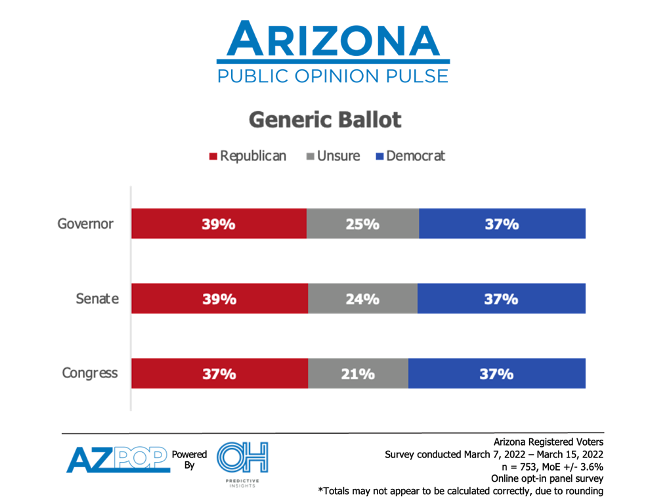 “The story we are left with from this data is that it’s still a level playing field for Arizona’s Governor, Senate, and Congressional races,” said Noble. “However, primary elections aren’t until August, so we will continue to keep a close eye to see who begins to climb the ladder.”

In a state as evenly divided as Arizona, both parties are going to need all the votes that they can get. While there is no clear leader in these surveys, both parties received welcoming news. 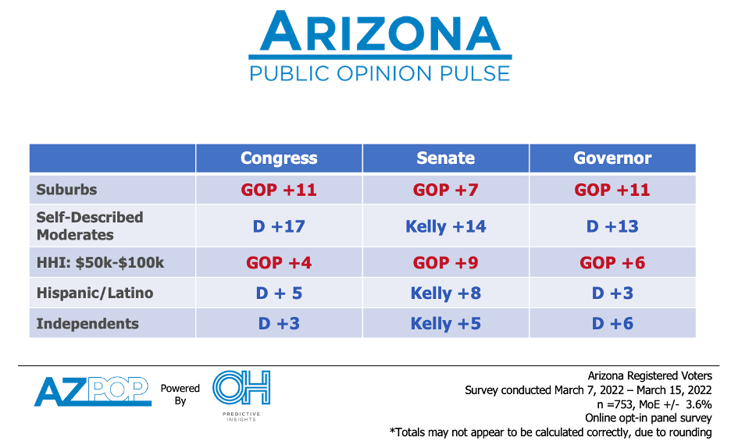 Republicans hold healthy leads among suburban voters, a group that was particularly alienated by the rhetoric of former President Donald Trump. The GOP is also leading among middle-income voters on all three generic ballots.