PHOENIX (February 28th, 2022)- As the US Senate Primary quickly rounds the corner in Utah at less than five months away, incumbent Republican Senator Mike Lee has been enjoying a commanding lead in the GOP Senate Primary. According to the latest Utah Public Opinion Pulse (UTPOP) survey by OH Predictive Insights (OHPI), Lee’s numbers have jumped 6% since the August 2021 UTPOP, carrying him over the coveted 50% mark among Utah GOP voters.

State of the GOP Primary

Since August, there has been no significant movement among the other Republican candidates, while Lee has inched his way closer to securing the GOP nomination. 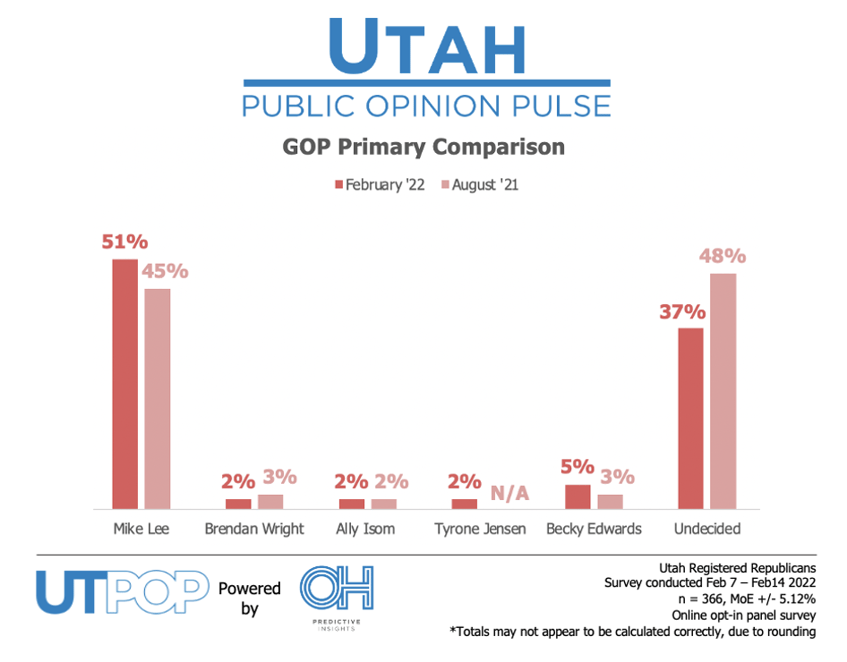 “With Mike Lee hitting that pivotal 50% benchmark while none of his opponents can seem to surpass 5% support, this is easily Lee’s Primary to lose,” said Mike Noble, OHPI Chief of Research.

State of the Democratic Primary

Of the five Democratic candidates running for US Senate, only two have peaked above single-digit support from Utah voters (Kael Weston: 14%; Steve Schmidt: 16%), leaving 3 in 5 Democrats still undecided. Democrats in Utah only make up about 16% of the electorate, so this survey’s reflective sample of Utah registered Democrats (110) is directional.

“Even with a small sample size, a lot of Utah Democrats don’t seem very motivated…a battle between Weston and Schmidt with the others still in single digits,” said Noble.

In a midterm match-up, Lee currently stands with 20-point advantages over the top Democratic candidates – Kael Weston and Steve Schmidt – at 45% support. With an independent candidate on the ballot, the recent survey found that Mike Lee still leads in a three-way race between him (34%), Weston (12%), and independent Evan McMullin (24%). If Schmidt is the Democratic nominee, Lee (36%) again has a healthy lead over the Democrat (11%) and McMullin (23%).

“Keep an eye out for anomaly Evan McMullin in this race – he’s definitely gaining attention with nearly a quarter of Utah’s electorate currently in his camp,” said Jacob Joss, OHPI Senior Data Analyst. 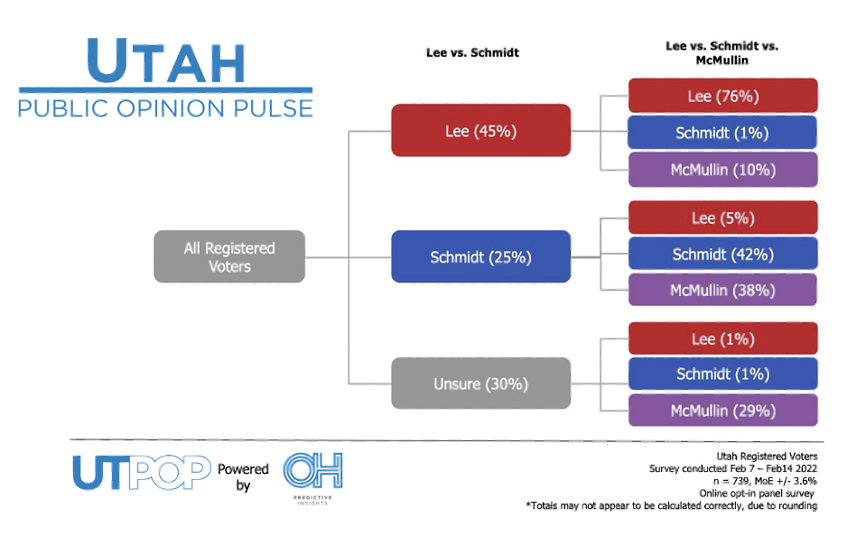 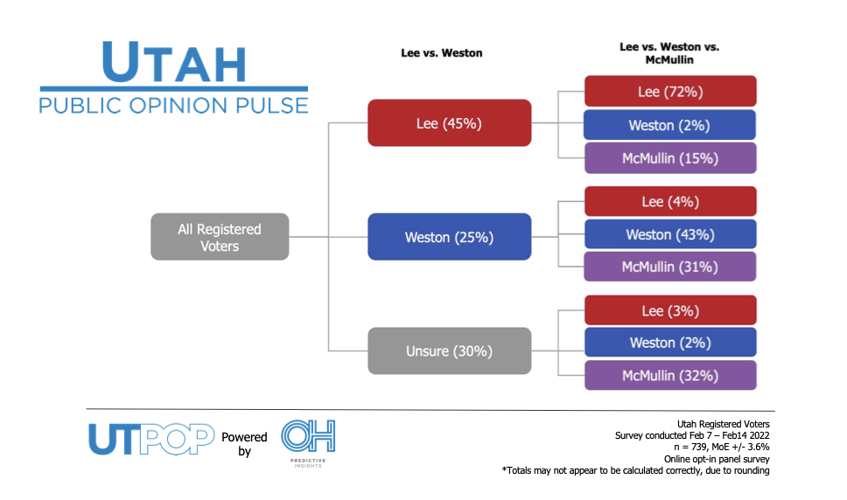 In addition to traditional matchups, the survey also asked voters who they believe will win the US Senate election in Utah. Although McMullin has support from nearly one-quarter of Utah’s electorate, most Utah voters don’t expect him to win. Overall, 57% of Utah voters think the Republican candidate will come out on top, while only 7% think that Evan McMullin will win.

“It would be an underdog moment for either the Democratic candidate or an independent to pull to the top, with traditionally red Utah having a Republican hold on the seat since the late 90s,” said Jacob Joss, OHPI Senior Data Analyst. “However, even Utahns know that the odds of a non-GOP candidate claiming victory are slim-to-none.”

Methodology: This poll was conducted as an online opt-in panel survey. The survey was completed by OH Predictive Insights from February 7th – February 14th, 2022 from a Utah Statewide Registered Voter sample. The sample demographics were weighted to accurately reflect gender, region, age, party affiliation, ethnicity, and education according to voter statistics derived from the Utah Lt. Governor’s Office and recent Census data. The sample size was 739 completed surveys, with a MoE of ± 3.6%. Numbers may not equal 100% due to rounding.