PHOENIX (August 11th, 2022)- After years of serving the state of Arizona with polling predictions, OH Predictive Insights (OHPI) predicts the outcomes of Arizona's GOP statewide races. As unofficial results from Arizona’s 2022 primary election are finalized, we compared the results to the OH Predictive Insights’ (OHPI) GOP poll of record of the 2022 primary election.

OHPI strives to be an unbiased source for Public Opinion polling, and we had six races on record for the contentious Statewide GOP Primary contests.  The winners of the contests were correct, although, the Governor’s race margin of support was off.

In OHPI’s final poll, released one week before Election Day, results showed an 18-point margin between the two frontrunners for the GOP Gubernatorial nomination, with Kari Lake the predicted winner at 51% and runner-up Robson at 33%. The Arizona Secretary of State’s unofficial results shows Lake currently at 48% (which falls within the OHPI poll’s stated margin of error of +/-4.37%) and Robson at 43% (understated by approximately 10 points in the OHPI poll).

Mike Noble, OHPI Chief of Research, commented on the resulting question, ‘why was Robson’s support under-estimated and not Lake’s?’: “The mode of the collection appears to be the culprit due to the vast majority of respondents on the final poll being completed on cellphones and few completed on landlines. While Robson's support was overstated in the Live Caller portion, she was massively understated in SMS mode. It’s there she missed the moe mark, whereas Lake’s supporters were more cellphone-based. That is why Lake’s vote share was correct and Robson’s was not." 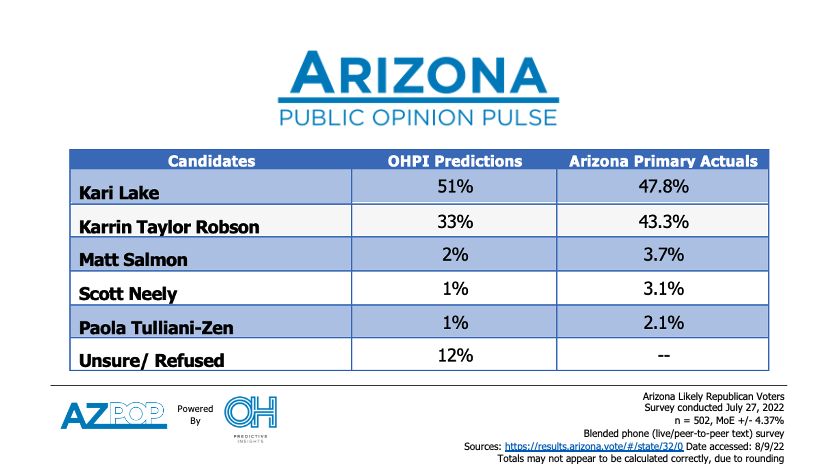 "With Arizona being a crucial battleground state notoriously difficult to poll, it is with great honor to continue to serve our home base with accurate predictions and insights," said Noble. "We [OHPI] are proud to see that our predictions were correct for Arizona's GOP U.S. Senate and down-ticket primary races and will use what we learned from the Governor's race as something to investigate for future polls because, like all things in life, we can only grow from these instances."

The U.S. Senate race in Arizona is similarly in line with OHPI expectations. The OHPI final primary poll put Blake Master’s support at 36% of Arizona likely voters. The poll had a margin of error of 4.37%, meaning the poll expected Blake Master’s support to fall between 31.6% and 40.3%. The Arizona Secretary of State’s office had unofficial results showing one candidate within the OHPI final range with Blake Masters at 40.1%. 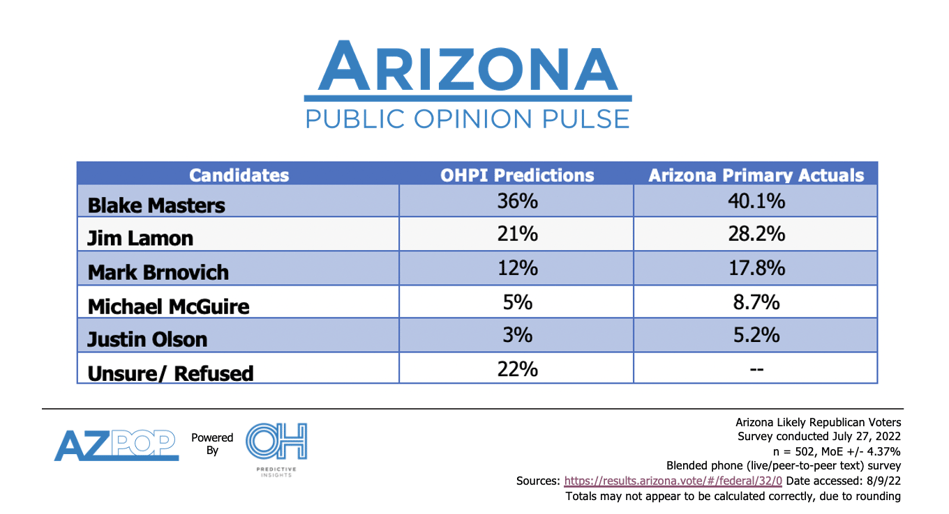 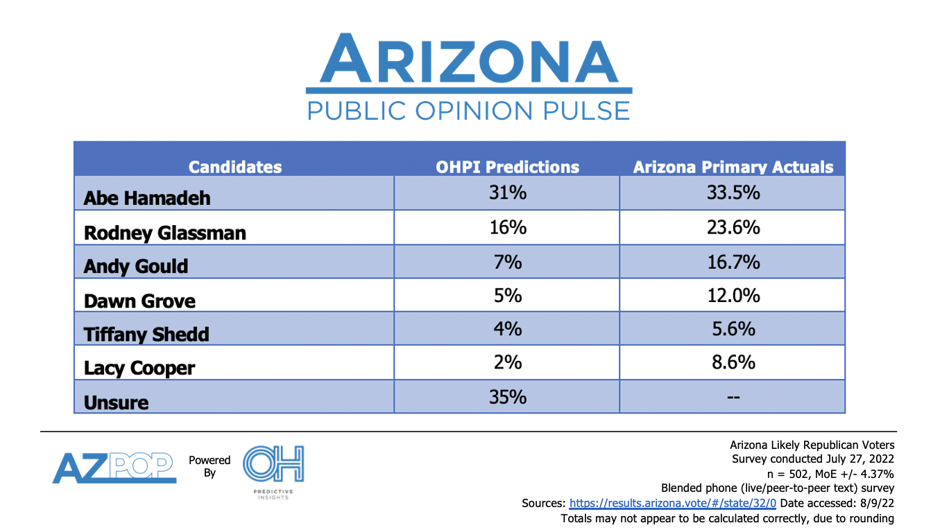 While the winners for each GOP Primary race were correctly predicted in the OHPI poll, there were significant groups of likely voters who were unsure of which candidate would earn their official vote ahead of August 2nd. The races, where the share of undecided likely voters exceeded 40% prior to election day, were particularly difficult to call within the margin of error of +/-4.37%. 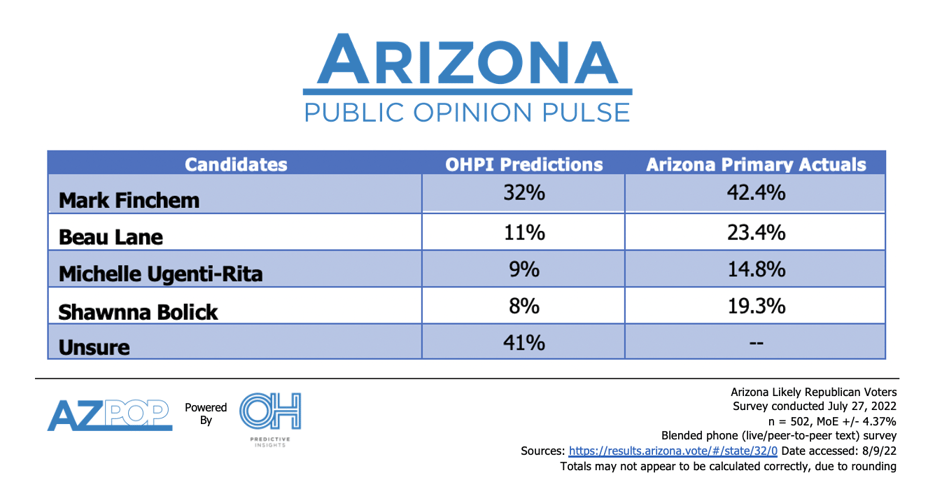 Methodology: This poll was conducted as a blended live caller/peer-to-peer text phone survey. The survey was completed by OH Predictive Insights on July 27th, 2022 from an Arizona Statewide Likely Republican primary voter sample. The sample demographics were weighted to accurately reflect the projected Arizona likely GOP Primary Voter population by gender, region, age, and party affiliation. The sample size was 502 likely GOP Primary voters in Arizona, with a MoE of ± 4.37%. Numbers may not equal 100% due to rounding.