Kelly and Lake have the Edge in U.S. Senate and Arizona Governor Races, Yet Still Within the Margin

Toplines and Sample Summary can be found here

PHOENIX (October 31st, 2022)- As Arizona’s General Election races toward us, candidates are neck and neck on the final lap to get to the finish line. OH Predictive Insights’ (OHPI) final Arizona Public Opinion Pulse (AZPOP) poll of likely voters before the General Election reveals that Arizona’s major races are close, however, the down-ballot races appear to be breaking toward the Democrats.

If the elections were held today, incumbent Democrat Mark Kelly sits at 48% support among likely voters, Republican Blake Masters at 46%, and Libertarian Marc Victor at 3%. Only 3% are still undecided. Masters had a base problem, however, ever since the US Senate debate, an influx of outside spending, and teaming up with Kari Lake has consolidated his once rocky base of support. 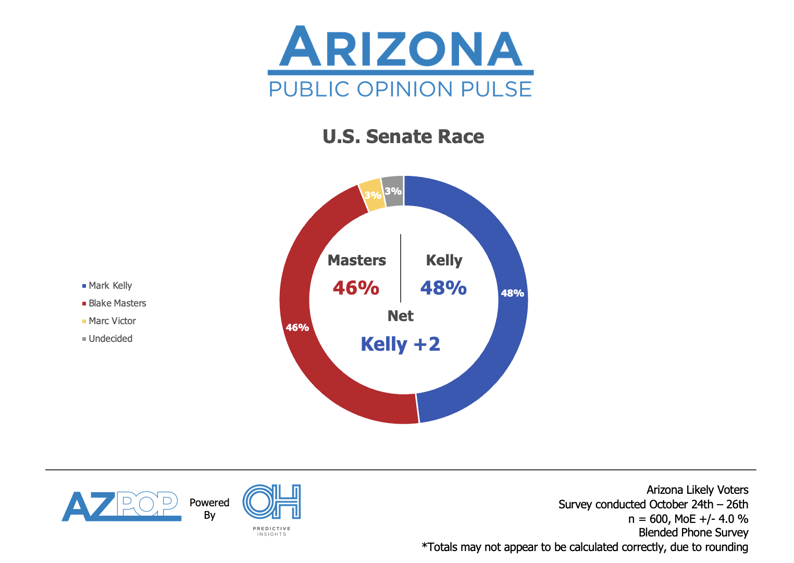 “The Senate contest went from sleeper to competitive in this past month – Kelly’s massive spending advantage over Masters may not be enough to hold his seat,” said Mike Noble, OHPI Chief of Research.

If elections were held today, former FOX 10 news anchor Kari Lake (49%) has a slight edge over current Secretary of State Katie Hobbs (47%); however, Lake’s 2-point advantage is still well within the poll’s stated ± 4.0% margin of error. 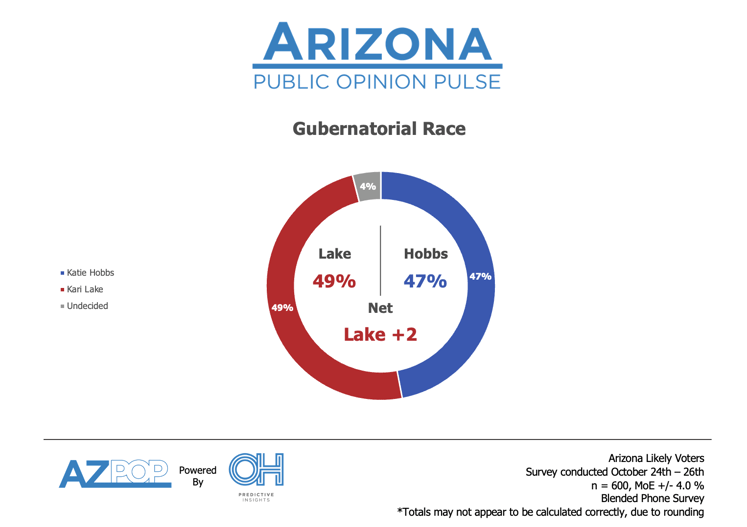 “Going into the final countdown before the big day, Lake is holding a narrow lead, but with numbers this close and neither candidate above the all-important 50% threshold, we will all have to anxiously await live reporting updates on November 8th,” said Noble.

“Based on this expected voter behavior, you can expect the first numbers posted on Election Night to favor Democrats, however, as the day-of votes get counted you’ll see Republicans quickly catching up,” said Noble. “Sit back and buckle in because it’ll be a wild ride as the votes get counted.”

An interesting takeaway from the survey is that a majority of Hobbs' voting base (55%) is voting for her because they are against Kari Lake, whereas three-fourths of Lake's voter base (74%) is making their decision because they are for Kari Lake rather than against Hobbs.

In a turn of events, the Democratic candidate and former Maricopa County Recorder, Adrian Fontes, takes the lead in the Secretary of State race over the previously leading Trump-backed candidate, Mark Finchem. Independents, who were key drivers of the share of undecideds, are now breaking for Fontes, giving him a 6-point lead. However, 11% of undecided voters could still swing this election one way or the other come November 8th. 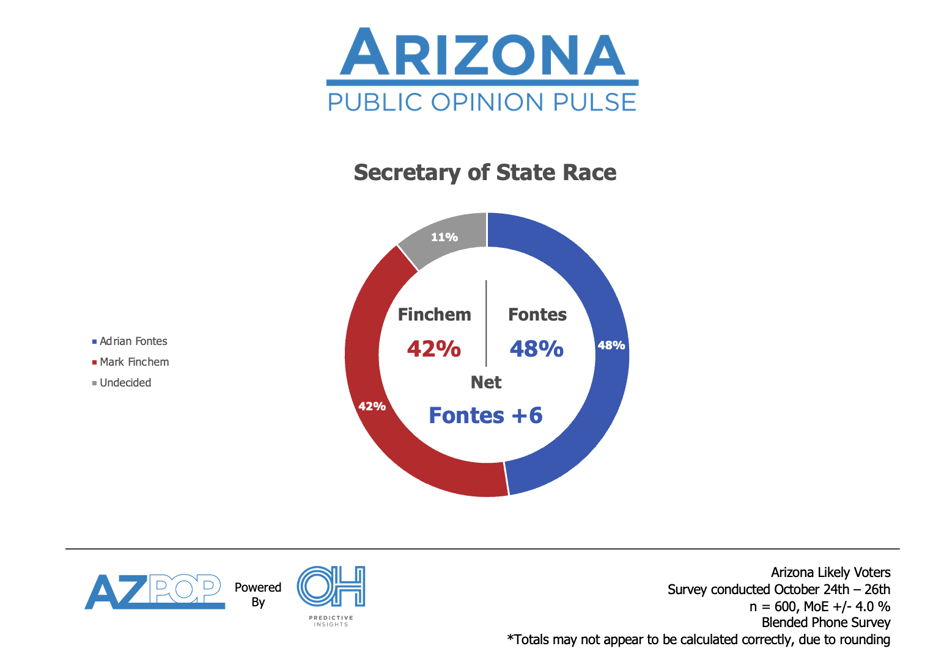 Democratic candidate Kris Mayes takes a within-the-margin lead over Trump-endorsed Abraham Hamadeh (45%, 42% respectively). With 12% of likely voters still undecided, these voters will likely be the deciding factor at the ballot box. 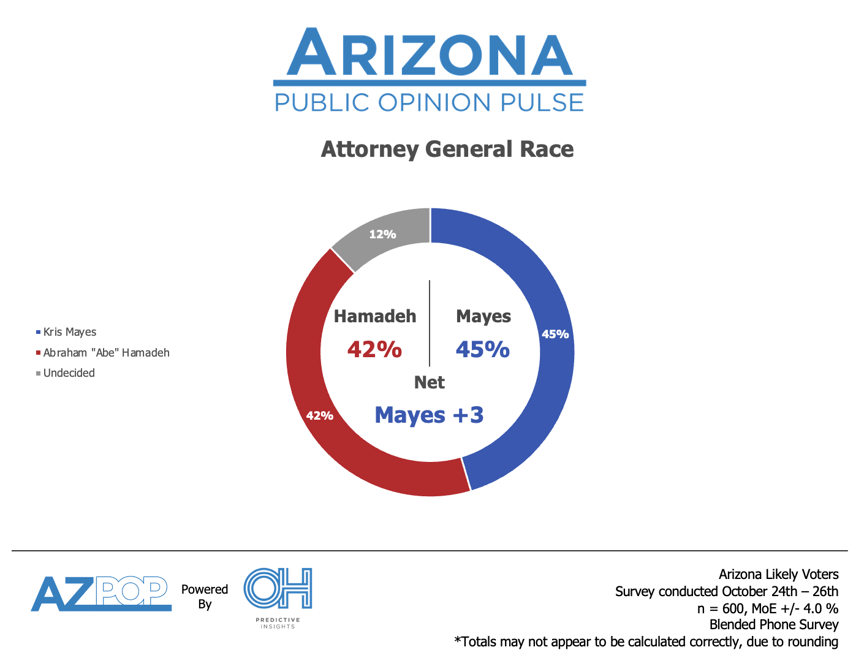 “If one thing is clear, voters are starting to really pay attention,” said Noble. “With no candidate in a comfortable leading position, most Arizona down-ticket races will come down to one thing: the undecided voters.”

The recent survey asked voters whether they will vote for or against Proposition 308, which would allow students who have lived in Arizona for two or more years to be eligible for financial aid to any four-year university or community college, as well as receive in-state tuition.

According to the survey, likely voters’ support is statistically split. 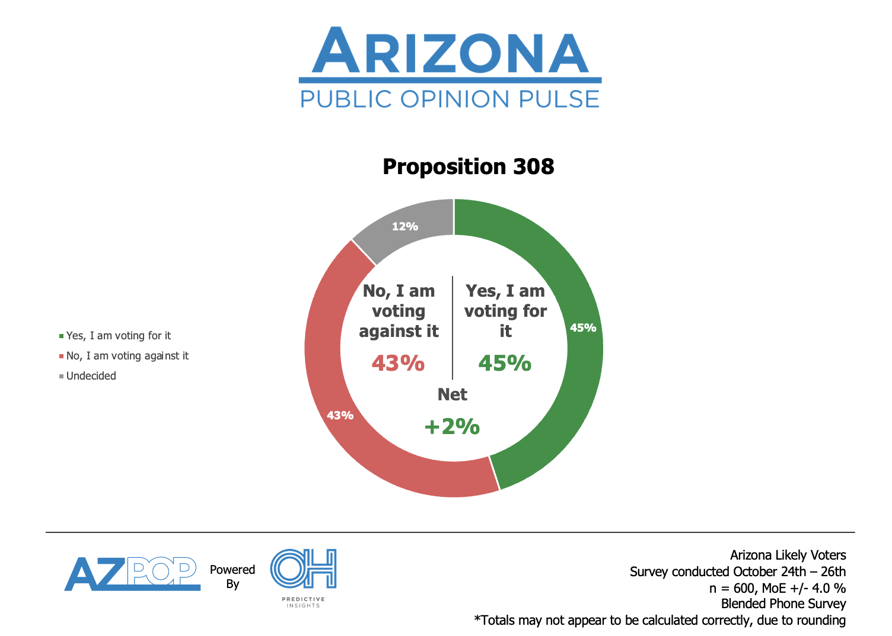 Methodology: This poll was conducted by OH Predictive Insights as 100% Phone based, Live Caller, and peer-to-peer text. The survey was completed from October 24th to October 26th, 2022, from an Arizona Likely Voter sample. The sample demographics were weighted to accurately reflect the likely voter population by gender, region, age, party affiliation, ethnicity, and educational attainment according to a recent voter file derived from the Arizona Secretary of State office and recent Census data. The sample size was 600 likely voters in Arizona with a MoE of +/- 4.0%. Numbers may not equal 100% due to rounding.