PHOENIX (November 1st, 2022)- While voters are hoping for clear skies and good weather next week on Election Day, these candidates are hoping for one thing: victory. OH Predictive Insights' (OHPI) latest Utah Public Opinion Pulse (UTPOP) of likely voters revealed that the odds are in Mike Lee’s favor as he broke the 50% threshold of support in his race. Meanwhile, the Treasurer’s race shows the incumbent State Treasurer, Republican Marlo Oaks, well-positioned with his closest opponent at just 8%.

In the race for the U.S. Senate in Utah, incumbent Republican Mike Lee is holding an assured position with support from 51% of likely voters, followed by unaffiliated candidate Evan McMullin at 36%. According to the poll, with just 4-points spread across Independent American candidate Tommy Williams and Libertarian James Arthur Hansen, just 9% remain Undecided in this contest. 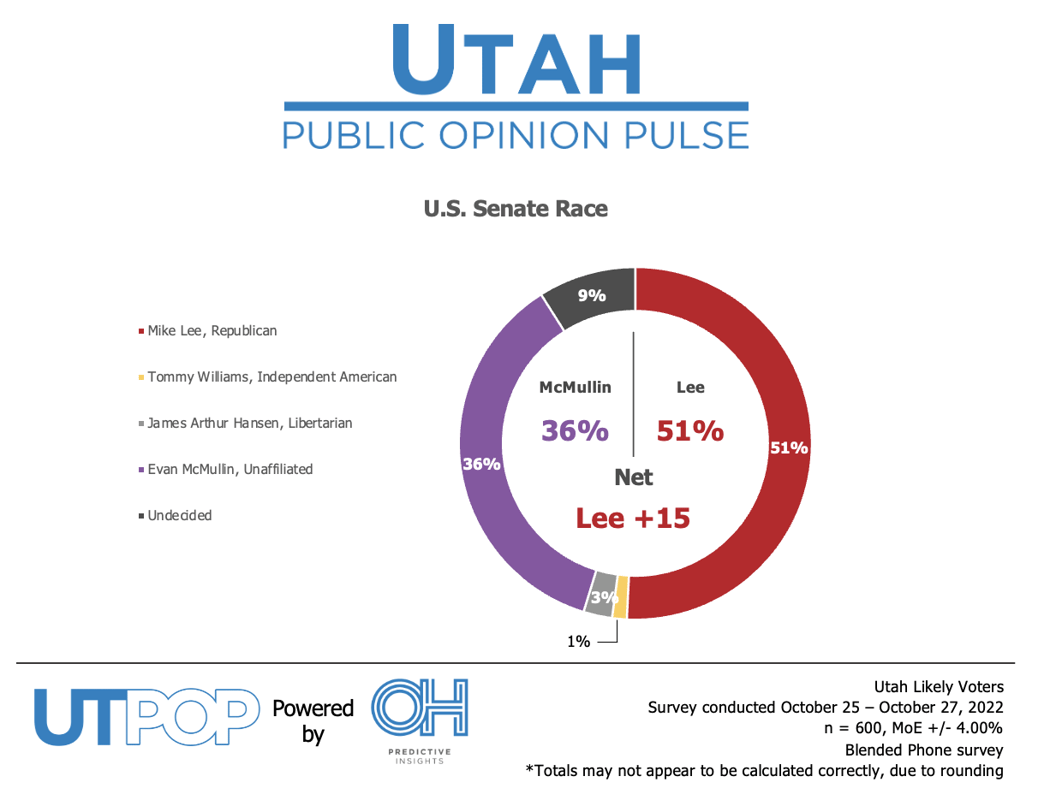 “Mike Lee is in a prize position being over the all-important 50% threshold this close to Election Day,” said Mike Noble, OHPI Chief of Research. “McMullin will be hard-pressed to make a push in these final days if he hopes to make up the ground on incumbent Mike Lee.”

“What is also interesting is that among Republicans voting for Evan McMullin, a majority (53%) are voting against Mike Lee which highlights the ideological division playing out in the GOP ranks as of late,” said Noble.

According to the recent survey, Republican incumbent Marlo M. Oaks continues to hold the lead at 38% support among likely voters; his closest opponent is at just 8%. Oaks’ support is slightly overshadowed by the 45% of voters who are still Undecided in this contest. Even so, Rogers, Buchman, and Horne are unlikely to earn winning shares of those undecideds in dependably-red Utah – 46% of Republicans are still undecided and will likely break in favor of Oaks. 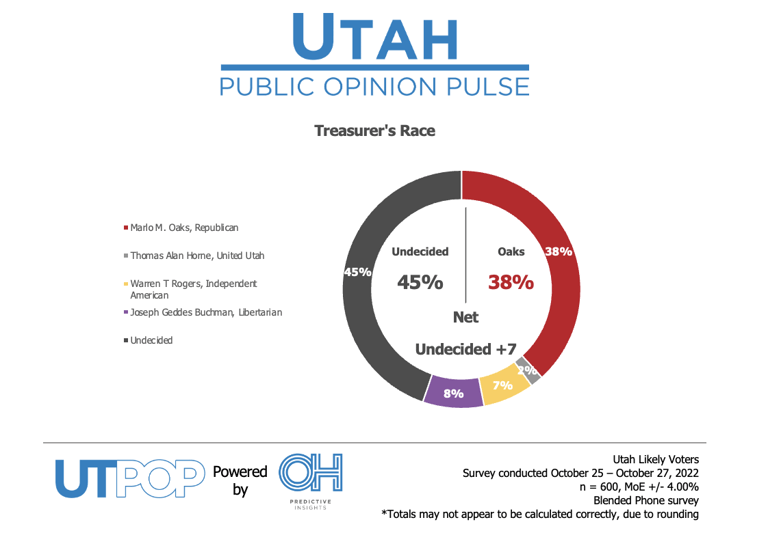 “The large share of undecideds this close to Election Day may appear to be a beacon of hope for the other candidates,” said Noble. “However, it is far more likely that Oaks’ Republican Party ID, incumbency status, and appointment for the role by Governor Cox will secure him a victory at the ballot box.”

Methodology: This poll was conducted by OH Predictive Insights as 100% Phone based, Live caller, peer-to-peer text, and text-to-online. Cell/Landline split (74% Cell/ 26% Landline). The survey was completed from October 25th to October 27th, 2022, from a Utah likely voter sample. The sample demographics were weighted to accurately reflect the likely voter population by gender, region, age, party affiliation, ethnicity, and educational attainment according to a recent voter file derived from VLO and recent Census data. The sample size was 600 likely voters in Utah with a MoE of +/- 4.0% Numbers may not equal 100% due to rounding.