UTPOP Poll of Record toplines and crosstabs can be found here

The final UTPOP 2022 poll, released one week before Election Day, showed Mike Lee earning the support of 51% of likely voters to Evan McMullin’s 36%. The poll had a margin of error of +/-4.0%, meaning that the poll expected Lee’s support to fall between 47% and 55%, and McMullin’s support to fall between 32% and 40%. The Utah Lieutenant Governor’s office certified results show Utah U.S. Senate winner Mike Lee well within the OHPI range, with Mike Lee at 53.15%. Evan McMullin’s final vote share (42.74%) exceeded the expectations of the final UTPOP by less than 3 points. With 9% of voters undecided at the time of the poll, final results showed that those undecideds mainly broke for Independent candidate Evan McMullin, increasing his final vote share.

“McMullin’s larger-than-anticipated vote share is a testament to the reality of polling: Polling gives us a snapshot in time of early voter sentiment of support that tells the story of the momentum of a race; they can’t predict the future,” said Mike Noble, OHPI Chief of Research.

In the State Treasurer race, the final UTPOP election poll put Republican incumbent Marlo M. Oaks’ support at 38% and all other candidates at less than 10% support, placing Oaks as a clear winner by a large margin. With 45% of Utah likely voters undecided at the time of the poll, it was expected that the final results would not near the results of the poll. While the victor of this race was called correctly, the Utah Lieutenant Governor’s office certified results of the Utah Treasurer race show Marlo M. Oaks as the winner by an overwhelming margin with 74.11% of the vote share. 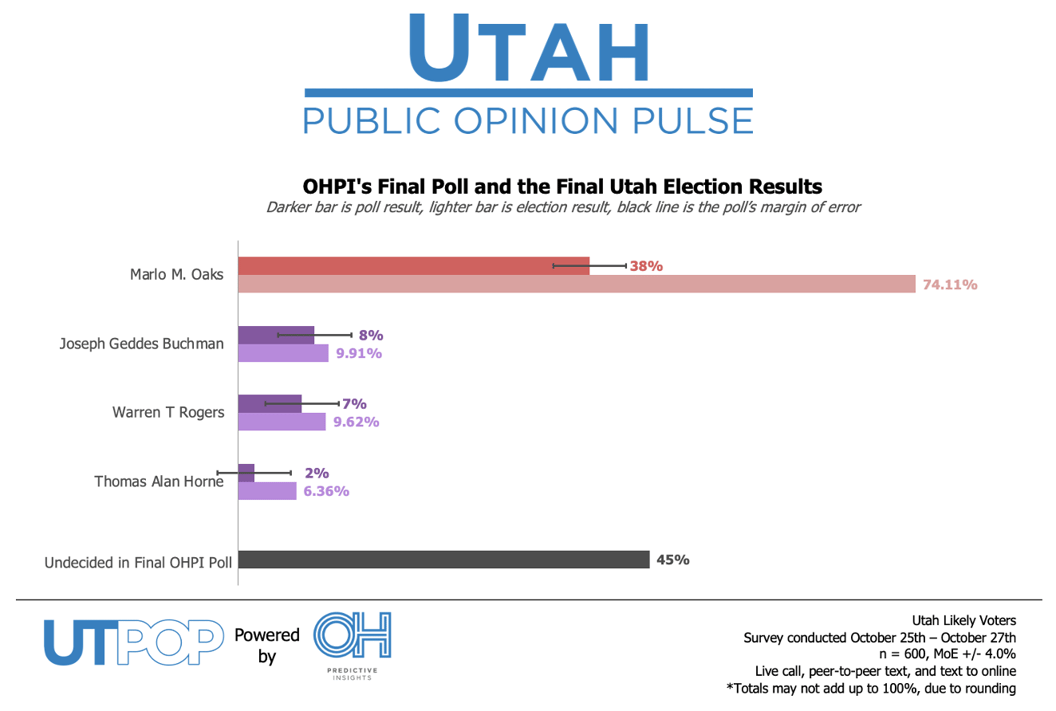 “Based on experience, the undecided vote share will typically break in-line with the current polling margins of support – we saw that again in the Utah Treasurer’s contest,” said Noble.

The wrap-up of the 2022 midterm election proves the value of having a pollster that understands the nuances of elections and the local electorate. This election showed that knowledge of the political landscape combined with sound methodology is vital for producing accurate results and insights into how to continuously improve the world of polling.

Methodology: The referenced UTPOP poll was conducted by OH Predictive Insights as 100% Phone based, Live caller, peer-to-peer text, and text-to-online. Cell/Landline split 74% Cell/ 26% Landline. The survey was completed from October 25th to October 27th, 2022, from a Utah likely voter sample. The sample demographics were weighted to accurately reflect the likely voter population by gender, region, age, party affiliation, ethnicity, and educational attainment according to a recent voter file derived from VLO and recent Census data. The sample size was 600 likely voters in Utah with a MoE of +/- 4.0% Numbers may not equal 100% due to rounding.