PHOENIX (November 26th, 2021)- With holidays just around the corner, Arizona residents are already planning out their shopping expenditures. According to the latest Arizona Public Opinion Pulse (AZPOP) conducted by OH Predictive Insights (OHPI), 78% of Grand Canyon State Residents plan to purchase holiday gifts for families and friends in 2021.

Among the 78% of Arizonans who plan to purchase holiday gifts for loved ones, 10% said they are going to do all of their holiday shopping online, while 5% suggested they will do no online shopping. Overall, the majority of Arizonans plan to do most (40%) or some (32%) of their holiday shopping online. This survey also revealed the key demographic groups who prefer to do their shopping online all or most of the time: respondents ages 35-44 years old (60%), those whose household income is greater than $100k (60%), and parents of minor children (59%).

The survey asked respondents an open-ended question regarding the amount of money they anticipate spending on holiday gifts this year, which found that, on average, Arizonans plan to spend between $400 (weighted median) and $655 (weighted mean) on holiday shopping. Thirty-one percent of residents plan to spend more than $550, and an equivalent share (30%) will spend less than $250. A plurality of respondents (39%) plan to spend between $250 - $549 on their holiday shopping expenditures. 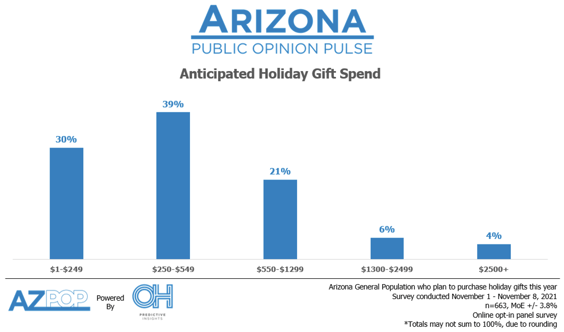 Arizonans expect to spend less money on holiday shopping – even on gifts alone – this year than the average American planned to spend last year ($650), according to the National Retail Federation.

“It is fascinating to see how much Arizonans plan to spend in their holiday shopping expenditures, especially compared to the nation,” said Mike Noble, OHPI Chief of Research. “It will be interesting to learn how their planned budgets compare to what they actually spent post-holiday season in our January AZPOP.”

“I found it heartwarming to see in the data that parents of adult children plan to spend the same amount on holiday shopping as parents of minor children,” said Noble. “Parents are parents, no matter the age of your child.”

Methodology: This poll was conducted as an online opt-in panel survey. The survey was completed by OH Predictive Insights from November 1st to November 8th, 2021, from an Arizona Statewide General Population sample. The general population sample demographics were weighted to accurately reflect gender, region, age, ethnicity, and education according to recent Census data. The sample size was 853 general population (18+ YO) Arizonans, with a MoE of ± 3.4%. Numbers may not equal 100% due to rounding.