PHOENIX (January 24th, 2022)- Recent conversations such as those to defund police or reduce resources for local police departments have raised questions about where Arizonans’ opinions currently stand on this topic. Looking for a deeper understanding of public opinion on police officers and law enforcement in the City of Phoenix, Phoenix Law Enforcement Association (PLEA) commissioned a survey from OH Predictive Insights (OHPI) asking registered voters in the City of Phoenix an array of questions about Phoenix police and public safety concerns.

In the recent survey commissioned by PLEA and conducted by OHPI, voters reported an overall positive sentiment for Phoenix’s police and the Phoenix Police Department, as a whole. When asked how they would grade the job Phoenix PD is doing, a large majority of Phoenix voters said they believe Phoenix police officers do a fair or better job (85%), including more than half (54%) who said they do a good or excellent job. Voters also look negatively at the attempt to remove on-campus police officers from schools – 71% of Phoenix voters support having a police presence in schools, while just 20% oppose.

According to the survey, three in five City of Phoenix voters (60%) have a favorable impression of their Phoenix Police Department. Of the various individuals and organizations asked about, Phoenix PD was the most favored.

The survey found that a potential factor behind this favorable opinion on law enforcement could be the overarching belief among Phoenix voters that the city would be safer with more police officers. Without providing additional statistics, 70% of voters believe Phoenix has a problem preventing/investigating crime – including 28% who say it is a major problem. When asked their opinion on the relationship between safety in the City of Phoenix and the police, nearly two thirds of Phoenix voters (62%) say Phoenix would be safer with more police while only 8% believe we need fewer. 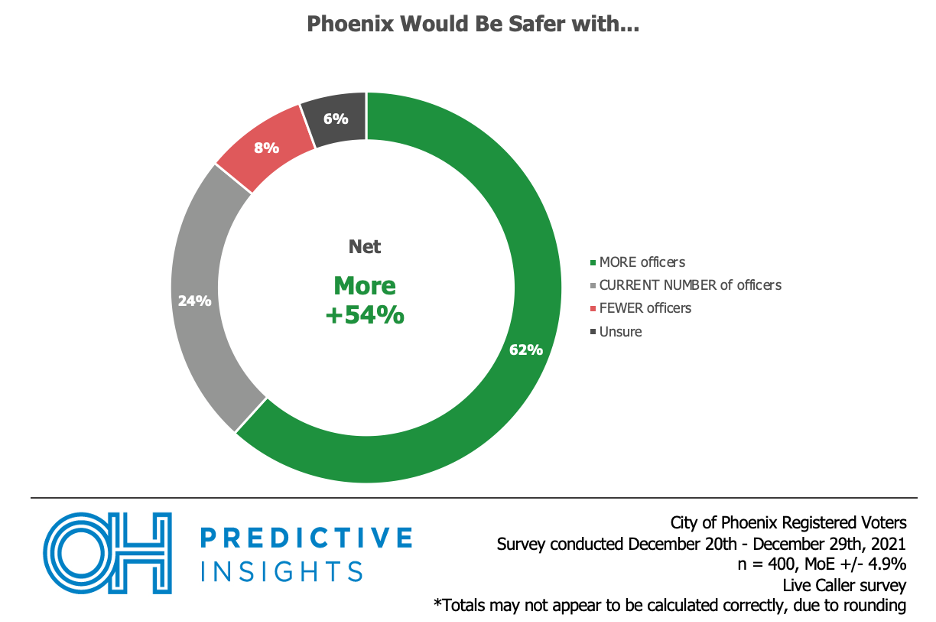 After being informed of statistics regarding current crime rates, caseloads, response times, and the size of Phoenix PD, the share of Phoenix voters who think there is a problem with crime in the city dramatically increased from a net +54% who say Phoenix has a crime problem to +77%. Notably, the perception of a “major” crime problem in Phoenix increased by 29% when informed with crime statistics. 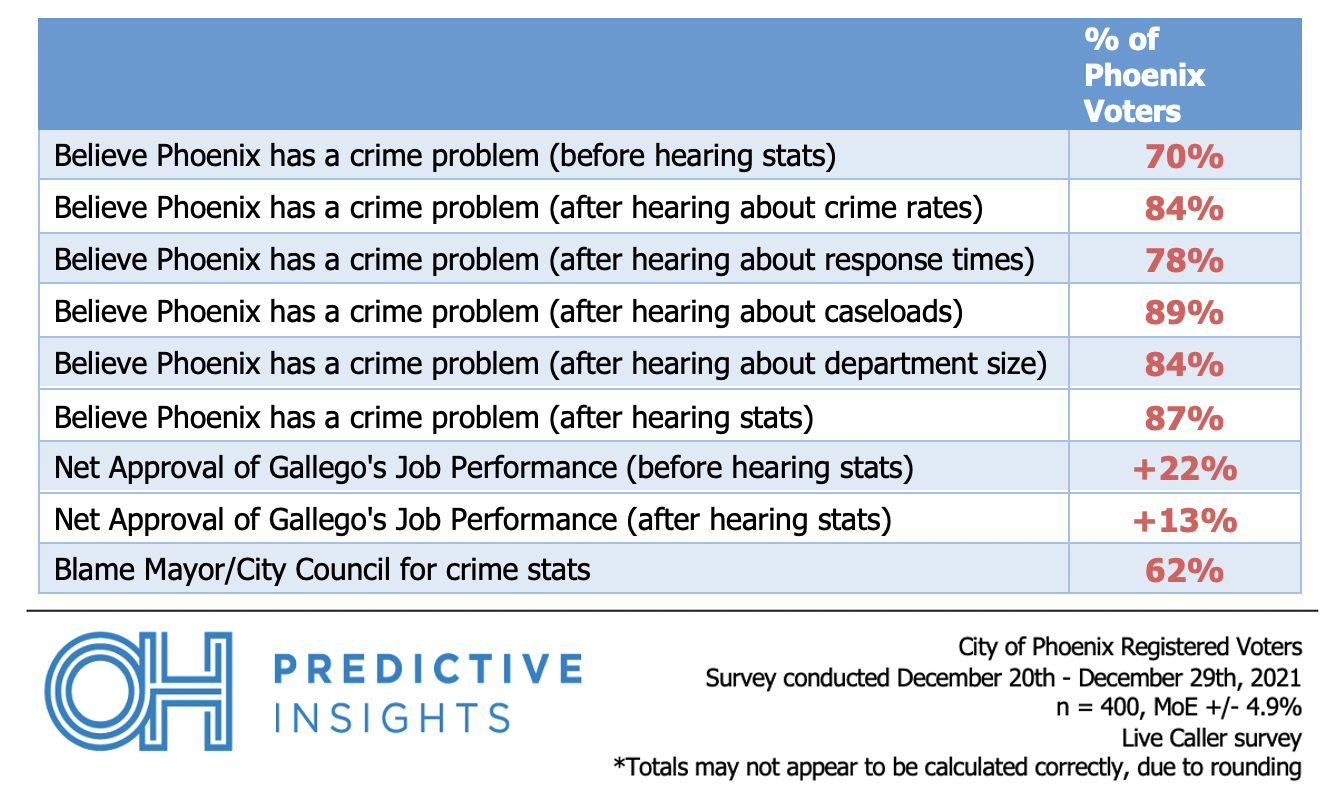 “Although perception is often one’s reality, data doesn’t lie. Phoenix voters believe their city has a crime problem, and statistics only reinforce that belief,” said Mike Noble, OHPI Chief of Research. “However, voters are laying much of the blame at the feet of city leadership rather than the police department – an important public sentiment for councilmembers to be cognizant of in their decision-making.”

After being provided with current data on crime, staffing, and 911 response times, three fourths of Phoenix voters (76%) support increasing funds and resources for police. Aligning with this support, voters also look unfavorably upon Phoenix City Councilmembers who voted to reallocate Phoenix police funding to other areas of City government. The net favorability of Councilmembers Ansari, Guardado, Pastor, and Garcia dropped by 11 points once voters were informed of their votes to reallocate police funding.

“It is evident that the recent anti-police rhetoric within the Phoenix City Council does not match voter sentiment within the City of Phoenix,” said Michael “Britt” London, President of PLEA. “Phoenix voters value our police officers and recognize that we need additional resources to protect our community and bring crime rates down. Voters clearly want the Mayor and Phoenix City Council to take action and direct additional funding and resources to the Phoenix Police Department to keep residents safe.”

Methodology: This poll was conducted as a 100% live caller phone survey. The survey was commissioned by Phoenix Law Enforcement Association (PLEA) and completed by OH Predictive Insights from December 20th – December 29th, 2021, from a City of Phoenix Registered Voter sample. Voters were double-verified as registered voters by their presence on a voter file derived from the Arizona Secretary of State’s Office and through respondent self-verification. The sample size of this survey was 400 Registered Voters, whose demographics were weighted to accurately reflect gender, region, age, ethnicity, and party affiliation based on the most current Arizona Secretary of State voter file – the exact percentages can be found in the table below. The sample of 400 registered voters yielded a MoE of ± 4.9%. Numbers may not equal 100% due to rounding.

About PLEA: The Mission of PLEA is to promote the positive role of the police profession. To protect and secure members’ rights and benefits through effective representation and professional relationships with the community and local, state, and national governments. To learn more, visit www.azplea.com.