AZPOP Poll of Record toplines and crosstabs can be found here

PHOENIX (December 15th, 2022)- As yet another election cycle of serving the State of Arizona with nonpartisan public opinion polling comes to a close, OH Predictive Insights (OHPI) compared the final results of several of Arizona’s races that kept us all on the edge of our seat to the final Arizona Public Opinion Pulse (AZPOP) poll of the 2022 Election season.

The final AZPOP 2022 poll, released one week before Election Day, showed Mark Kelly earning the support of 48% of likely voters to Blake Masters’ 46%. The poll had a margin of error of +/-4.0%, meaning that the poll expected Kelly’s support to fall between 44% and 52%, and Masters’ support to fall between 42% and 50%. The Arizona Secretary of State’s office certified results show both candidates well within the OHPI final range, with Mark Kelly at 51.4%, retaining his seat in Arizona’s U.S. Senator, and Blake Masters 46.5%. OHPI’s results more accurately reflected the race than the final polling average on RealClearPolitics.

“The Senate race was incredibly close, although, with hundreds of millions of dollars spent on the contest, the 3% of undecided voters predominantly broke for Kelly, breaking Masters’ chances of unseating Kelly,” said Mike Noble, OHPI Chief of Research. 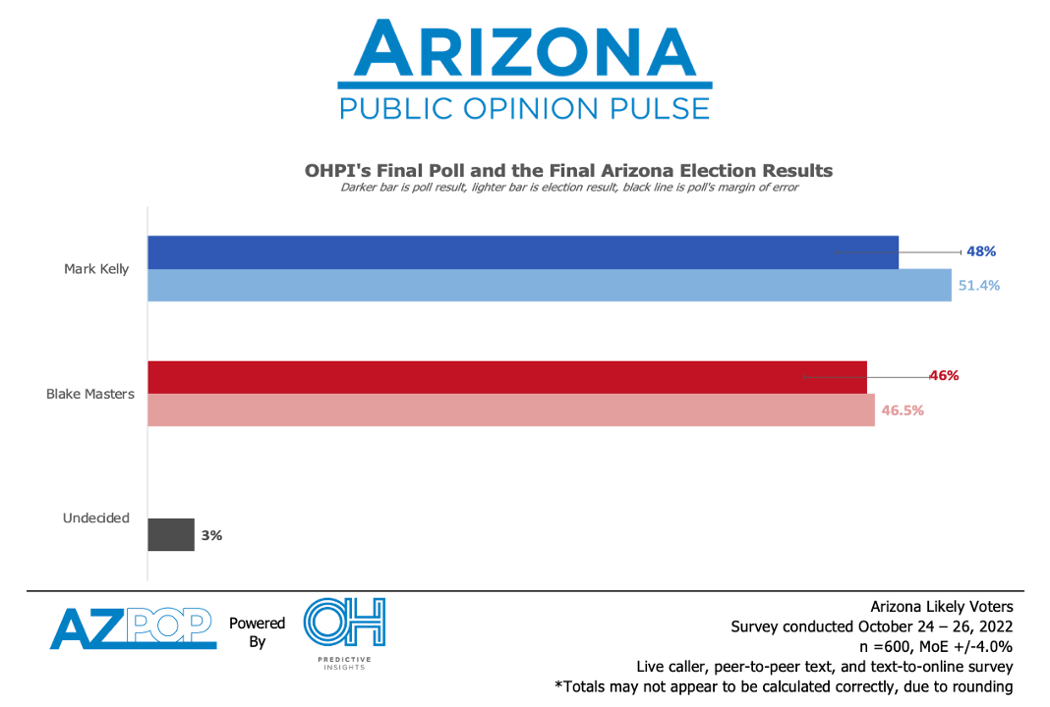 In the neck and neck race for Arizona Governor, the final AZPOP election poll put Katie Hobbs (47%) and Kari Lake (49%) at a within-the-margin tie, separated by just 2 points. With a margin of error of +/-4.0%, the poll expected Katie Hobbs’ support to fall between 43% and 51%, and Kari Lake’s support to fall between 45% and 53%. The Arizona Secretary of State’s office certified results show both candidates well within the OHPI final range, with Katie Hobbs claiming a slim victory at 50.3% and Kari Lake at 49.6%. Once again, OHPI’s results more accurately reflected the race than the final polling average on RealClearPolitics.

"With Arizona being a crucial battleground state notoriously difficult to poll, it is with great honor to continue to serve our home base with trusted, nonpartisan data," said Noble. "As prominent national pollsters wonder what went wrong with their state polling in these top races, I’m pleased our polling and turnout models most accurately reflected Arizona’s electorate.”

The final AZPOP 2022 poll showed Adrian Fontes earning the support of 48% of likely voters to Mark Finchem’s 42% in the race to replace Katie Hobbs as Secretary of State. With a +/-4.0% margin of error, the poll expected Fontes’ support to fall between 44% and 52%, and Finchem’s support to fall between 38% and 46%. With double-digit undecideds at the time of the poll, OHPI was still able to provide an accurate read on the race. The Arizona Secretary of State’s office certified results show Adrian Fontes winning this race with 52.4% to Mark Finchem’s 47.6% – both just outside the poll’s margin of error due to that 10% of undecided voters at the time of the poll.

“What is interesting about the SOS race is that it went from Finchem with an edge just before Early Voting kicked off to Fontes taking a lead and holding his lead as voters started to pay more attention to the race and the issue platforms of the respective candidates,” said Noble. 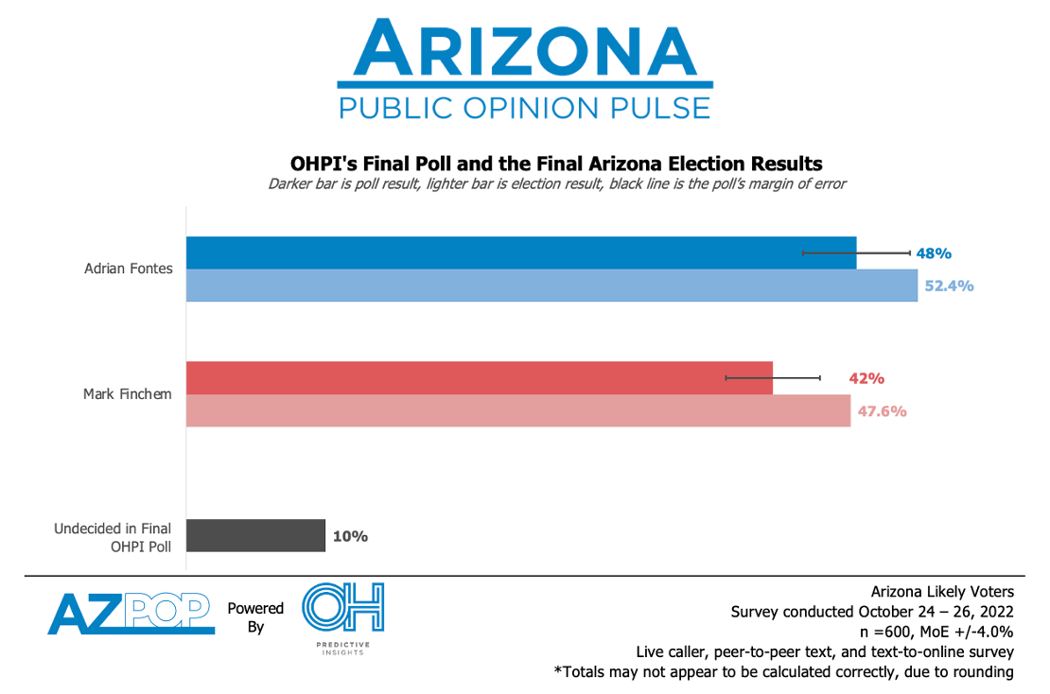 In the Attorney General race, the final AZPOP election poll put Kris Mayes (45%) and Abe Hamadeh (42%) at a within-the-margin tie, separated by just 3 points. With 11% of likely voters undecided at the time of the poll, it was clear this race could go either way. The Arizona Secretary of State’s office certified results shows the two candidates at a near-exact tie with only 511 votes carrying Mayes’ lead, meaning this race, per law, is headed into recount. 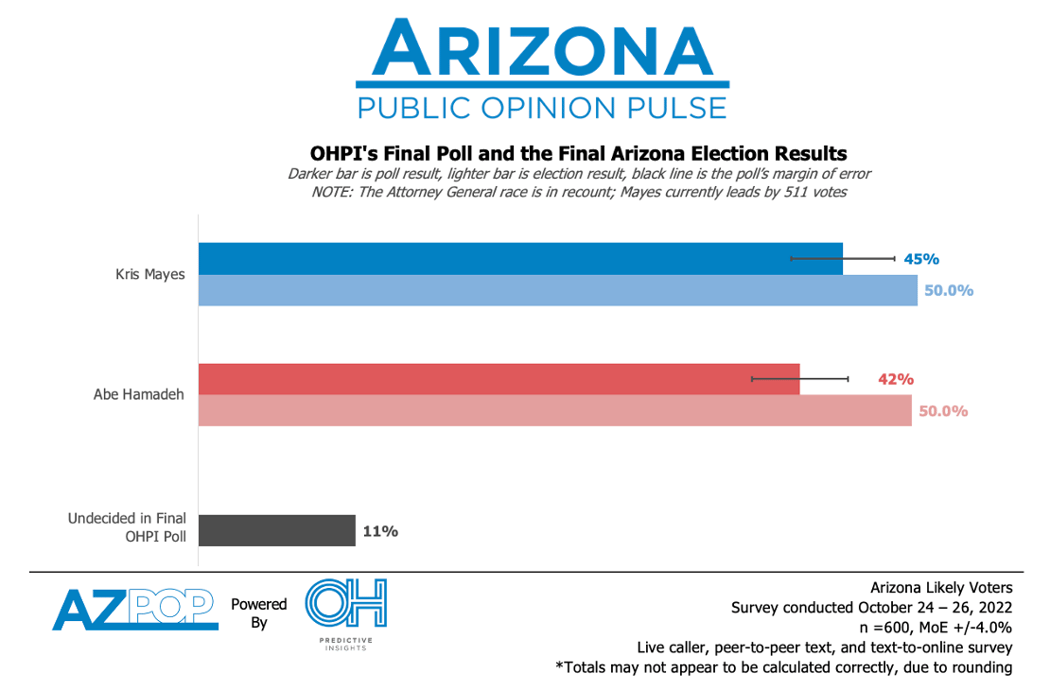 “If this election speaks to anything, it speaks to the impact of every single vote,” said Noble. “Polling gives us a snapshot in time of early support that tells the story of the momentum of a race, but the actuals all come down to turnout.”

The wrap-up of Arizona’s 2022 midterm election exemplifies the value of having a pollster that understands the nuances of elections and the local electorate – not one who breezes in from out of state when election season rolls around. This midterm showed that knowledge of the political landscape combined with sound methodology is vital for producing accurate results and insights into how to continuously improve the world of polling.

Hear first-hand from the experts with the opportunity to join in on the discussion with Mike - pick his brain, ask your burning questions, and find out ‘what the heck just happened.’

Interested in booking Mike to speak to your group or at your next event?

Methodology: The referenced AZPOP poll was conducted by OH Predictive Insights as 100% Phone based, Live Caller, and peer-to-peer text. The survey was completed from October 24th to October 26th, 2022, from an Arizona Likely Voter sample. The sample demographics were weighted to accurately reflect the likely voter population by gender, region, age, party affiliation, ethnicity, and educational attainment according to a recent voter file derived from the Arizona Secretary of State office and recent Census data. The sample size was 600 likely voters in Arizona with a MoE of +/- 4.0%. Numbers may not equal 100% due to rounding.