PHOENIX (November 23rd, 2021)- We are now less than one year away from the 2022 midterm elections when Arizona voters will return to the polls to cast their votes in several competitive statewide elections. We are beginning to get a glimpse of how enthusiastic voters are to cast their ballots next year. According to the latest Arizona Public Opinion Pulse (AZPOP) conducted by OH Predictive Insights (OHPI), there has also been little movement in the primaries for some of the state’s top races.

In the open race for Governor of Arizona, former news anchor Kari Lake remains on top in the Republican primary. Lake, who recently earned the endorsement of former President Donald Trump, currently enjoys the support of 28% of Republican primary voters. Former Congressman Matt Salmon registers at a distant second with 11% support. None of the remaining candidates earned more than 10% support, including State Treasurer Kimberly Yee who is polling at 6% – a perhaps surprising showing for the only statewide elected official in this particular race. 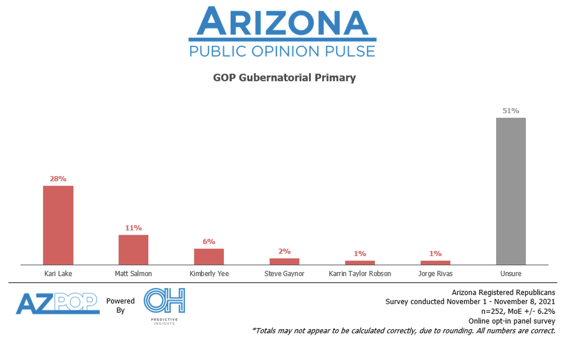 The Democratic primary for Governor has been a much quieter affair, and polling reflects that. Secretary of State Katie Hobbs maintains a wide lead in the race, amassing 42% of the vote. Her nearest opponent, former Nogales Mayor Marco Lopez, earns 8% support.

“While most statewide primaries are in flux, this race appears to be one in which there is little question who the frontrunners are,” said Mike Noble, OHPI Chief of Research. “However, frontrunner Katie Hobbs ran into some heat recently (after this survey had already left the field), which could very well affect her numbers – this will be interesting to watch as OHPI keeps a pulse on voter sentiment in Arizona.”

Another consequential Republican primary to keep an eye on is the race to take on Democratic freshman Senator Mark Kelly. Several GOP candidates are vying to challenge him, though former President Donald Trump has so far remained on the sidelines in the crowded field. Attorney General Mark Brnovich continues to lead the pack with 27% of Arizona Republicans’ vote, followed by Major General Michael McGuire’s 12%. Businessman Blake Masters pulls in 9%, and the rest of the field is registering at 5% or lower. Forty-six percent are undecided.

When asked to choose between unnamed Democratic and/or Republican candidates in given races, Arizona voters statistically evenly split. On the generic congressional ballot, Republicans receive 37% support while Democrats receive 36%. In the race for Arizona’s Governor, 39% would prefer the Republican candidate while 37% would prefer a Democratic contender. In the race for U.S. Senate, 40% say that they support freshman Senator Kelly, while 39% support his Republican challenger. Voters are also evenly divided when asked which party does a better job governing in Arizona: 41% believe Republicans do a better job, and 40% believe Democrats do a better job. 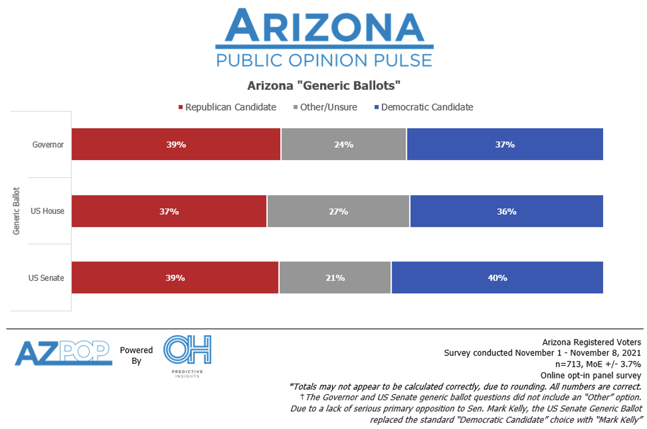 “While Republicans have early frontrunners for Governor and Senate, both primaries could still end up being competitive with half of the GOP electorate still uncommitted,” said Noble. “In a battleground state like Arizona, it is no surprise that voters are divided ahead of what will likely be an election year in which multiple statewide races will come down to the wire.”

Voters across the aisle in the Grand Canyon State are eager to return to the voting booths next year, according to the survey. Seventy-one percent of Republicans say that they are either extremely or moderately enthusiastic to vote along with a statistically equivalent 72% of Democrats. However, it is worth noting that more Republicans say they are “very likely” to vote: more than eight in ten Republican voters are very likely to vote, compared to two in three Democrats who say the same. 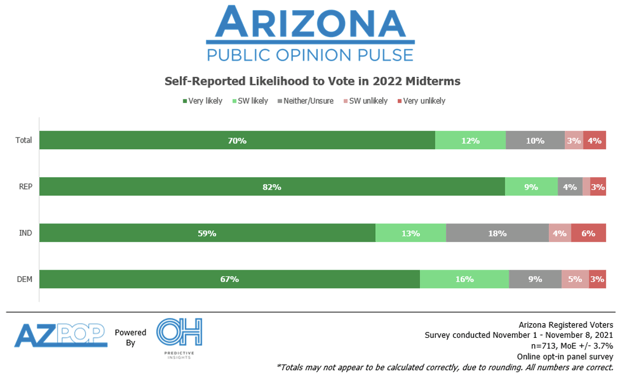 “Voter enthusiasm across the aisle like we see in the results of this survey is a key driver of Arizona’s status as a swing state,” said Noble. “The enthusiasm to vote is there for both leading parties, but at the end of election day, it all comes down to turnout. The data shows that as of now, Arizona Republicans are just more motivated to cast a ballot.”