State of GOP: Voters Break Heavy and Hard for Lake

State of GOP: Voters Break Heavy and Hard for Lake


PHOENIX (July 29th, 2022)- Arizona Primary election is just days away and the race to the finish line is anything but cooling off. In OH Predictive Insights’ (OHPI) third (and final) statewide Likely GOP Primary Voter Poll of the current election cycle, Arizona likely voters revealed a once competitive race between Robson & Lake now looking like a blowout for Lake.

This AZPOP was conducted on July 27th, 2022 and surveyed 502 Arizonans qualified as likely GOP primary voters, giving the survey a margin of error of +/- 4.37%.

Almost half of the respondents (49%) indicated that they’ve already voted, meanwhile, 51% reported that they have not voted yet, but plan on voting.

With only days left in the GOP Primary race for Governor, the latest polling shows Likely GOP Primary voters breaking heavy and hard for the former local Fox 10 News Anchor-turned gubernatorial candidate, Kari Lake. With one week before voters received early ballots, OHPI’s poll showed a close race between Lake and Robson – not anymore. Much has happened since the contest gained national attention as a proxy battle between the GOP Party and Trump loyalists – with lots of money spent in the process. 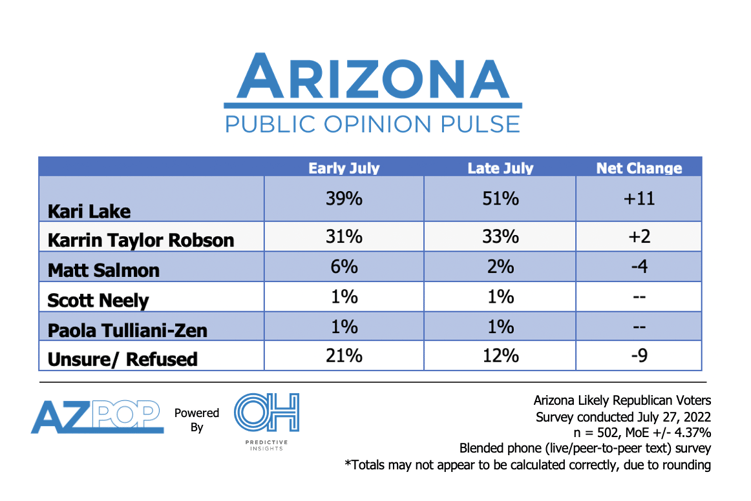 Lake is out-performing Robson by 11-points among Males, 24-points among Females, 16-points in Maricopa County, and 22-points in Rural counties. In addition, Lake is capturing a whopping 75% of respondents who self-identified as Supporters of Donald Trump, whereas Robson is leading among Supporters of the Republican Party, capturing 62% of that group. The problem for Robson is that the Trump Supporters are a larger group than the Republican party supporters. Lake is also carrying self-identified Conservatives by 2:1.

“The inter-party battle of the GOP is about to hit its climax and the data indicates Lake is in a commanding position,” said Mike Noble, OHPI Chief of Research. “In these final weeks of the race, Lake’s campaign is like Katniss Everdeen – the girl on fire.”

Blake Masters’ momentum continues since our last poll and has expanded his lead over his closest competitor, Businessman Jim Lamon. Masters now holds 36% of the vote and a 15-point lead over Lamon – 22% are still Undecided. The data indicates that Masters’ primary driver of support is among Supporters of Donald Trump where he’s capturing 53% of that group. 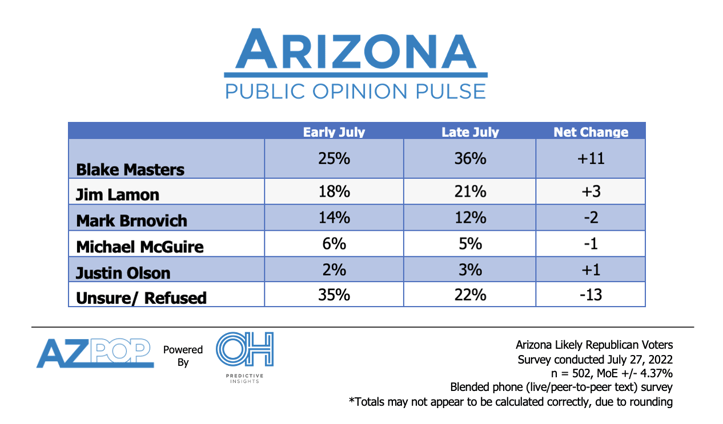 “Masters is in a strong position with a fractured field and will likely be moving on to take on incumbent Mark Kelly,” said Noble.

Since the latest look at the state-wide down-ticket races, undecided voters became not-so undecided as they have put Trump-endorsed candidate, Abe Hamadeh, in a 15-point lead over the runner-up Rodney Glassman (16%). Gould (7%), Grove (5%), Shedd (4%), and Cooper (2%) sit at the tail-end of the Attorney General race. 35% of voters are still Undecided and could provide some surprises come Election night. 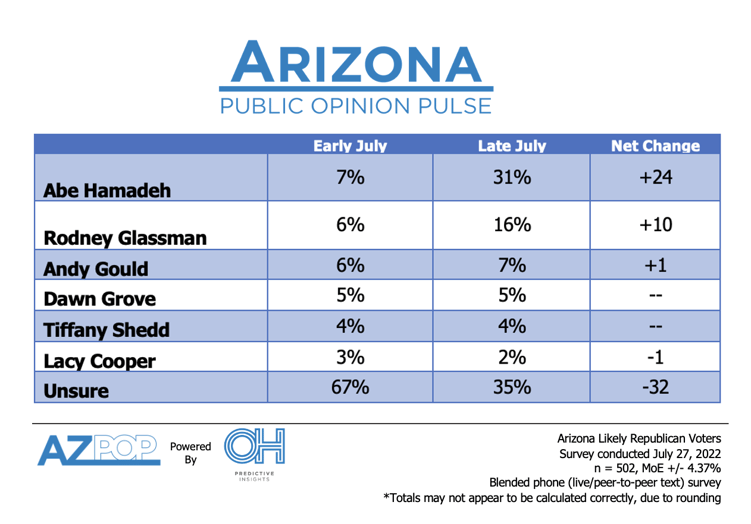 “Hamadeh has the upper hand although Glassman is showing forward momentum with his 10-point increase since early July,” said Noble.

The undecided voters went from 72% to less than half (41%), showing ultimate support for Trump-endorsed and Republican frontrunner, Mark Finchem, who continues to hold a significant lead over his opponents. Fighting for a distant second are Beau Lane (11%), Michelle Ugenti-Rita (9%), and Shawnna Bolick (8%). 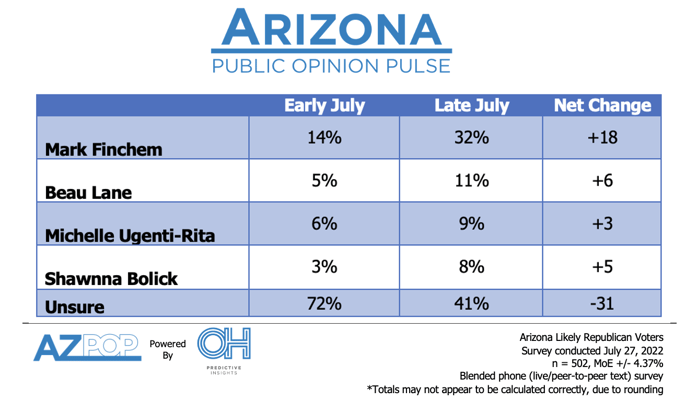 Similar to the Secretary of State race, the undecided voters pushed Kimberly Yee to a comfortable lead with 21 points over runner-up, Jeff Weninger (12%). At the tail-end of the race is Bob Lettieri clocking in at 7%. 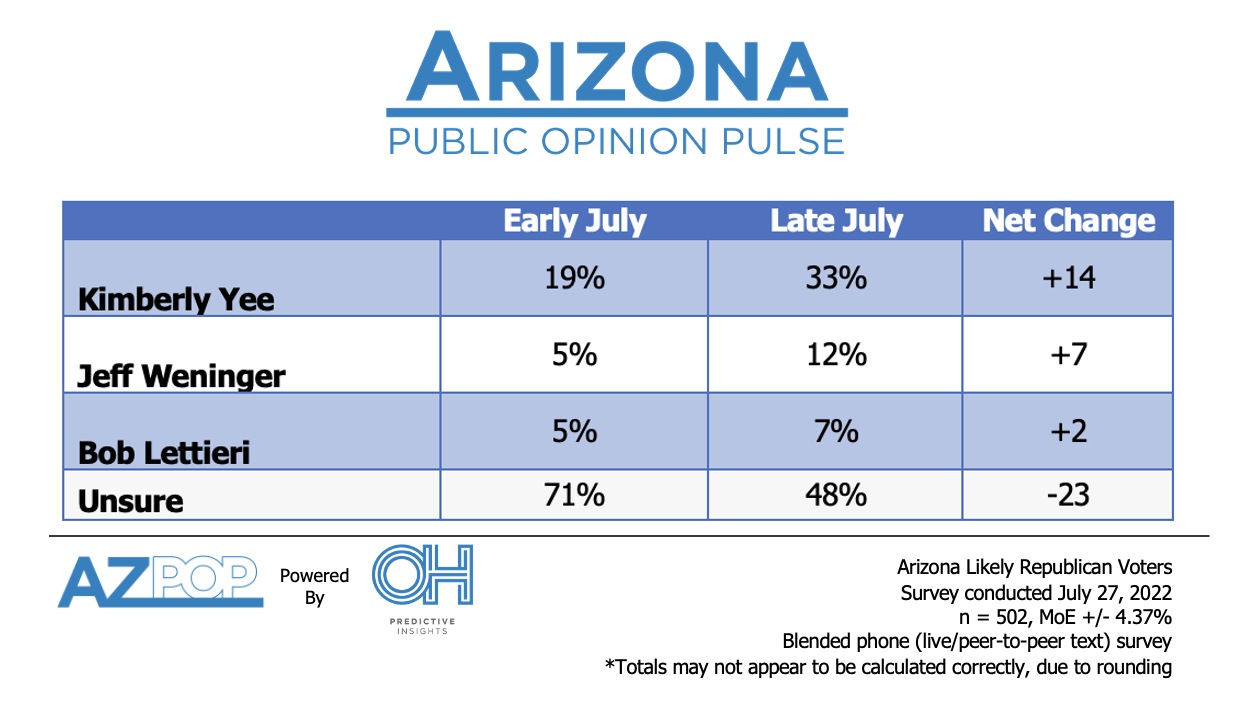 In a shocking turn of events, Tom Horne and Shiry Sapir are tied for first place in the Superintendent of Public Instruction race at 21%. Sapir went up 14 points since early July. Michelle Udall sits in third place at 14%. Although the undecided voters went down, there is still almost half (44%) who will be the deciding factor for who will win this race.

Methodology: This poll was conducted as a blended live caller/peer-to-peer text phone survey. The survey was completed by OH Predictive Insights on July 27th, 2022 from an Arizona Statewide Likely Republican primary voter sample. The sample demographics were weighted to accurately reflect the projected Arizona likely GOP Primary Voter population by gender, region, age, and party affiliation. The sample size was 502 likely GOP Primary voters in Arizona, with a MoE of ± 4.37%. Numbers may not equal 100% due to rounding.