Poll toplines and crosstabs can be found here

PHOENIX (May 13th, 2021)- Discourse over Arizona Senator Kyrsten Sinema’s thumbs-down vote on a $15 minimum wage is disappearing in the rearview mirror as her favorabilities are starting to even out, now matching colleague Senator Mark Kelly.

After being significantly behind Mark Kelly in March (Sinema Net: -1, Kelly Net: +11), Kyrsten Sinema’s net favorability (45/36, +9) is now significantly even with him (45/38, +7), according to OH Predictive Insights’ most recent Arizona Public Opinion Pulse (AZPOP).

This AZPOP, conducted from May 3-5, surveyed 935 registered voters in Arizona and had a margin of error of ± 3.2%.

The two Senators have very different coalitions for people who happen to have the same total favorable rating of 45%. While Sinema is growing more popular among Democrats with 54% of them having a favorable opinion of her, Kelly is far more liked by his party’s members with 72% approval. Both Senators hold similar approval ratings with Independents (Sinema 44%, Kelly 42%), but GOP voters give Sinema high marks (37%) compared to Kelly (22%). 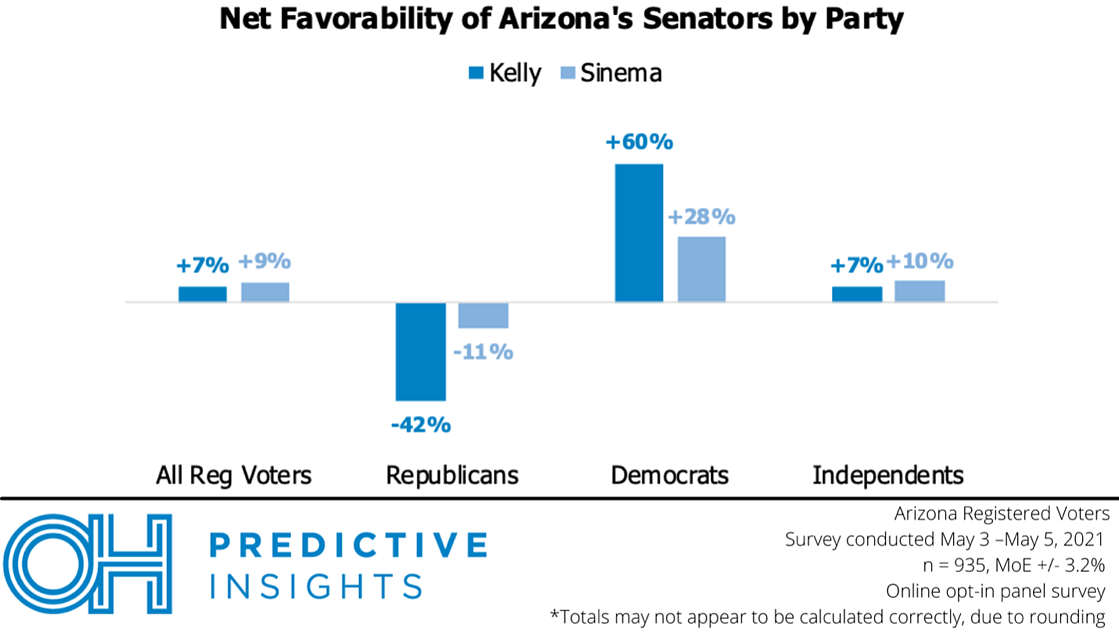 “Though Senator Sinema angered members of the Democratic party’s base, she has plenty of time to get in the good graces of those voters,” said OH Predictive Insights Chief of Research Mike Noble. “While she still needs to attract those voters back into her camp, Sinema’s outreach to Republicans continues to pay dividends.”

Switching lenses from party to ideology, some liberals are still unhappy with Sinema; she is 22 points behind Kelly with these voters. Still, Sinema has a statistically equal level of total favorability among moderate Republicans (41%) as she does liberal Democrats (44%).

Media consumption correlates with the favorability of these two Senators, particularly news sources. Voters who say they watch conservative-leaning FOX News on at least a weekly basis favor Sinema (57%) over Kelly (40%), and those who reported watching liberal-leaning MSNBC at least weekly are more enthusiastic about Mark Kelly (86%) than Kyrsten Sinema (68%). 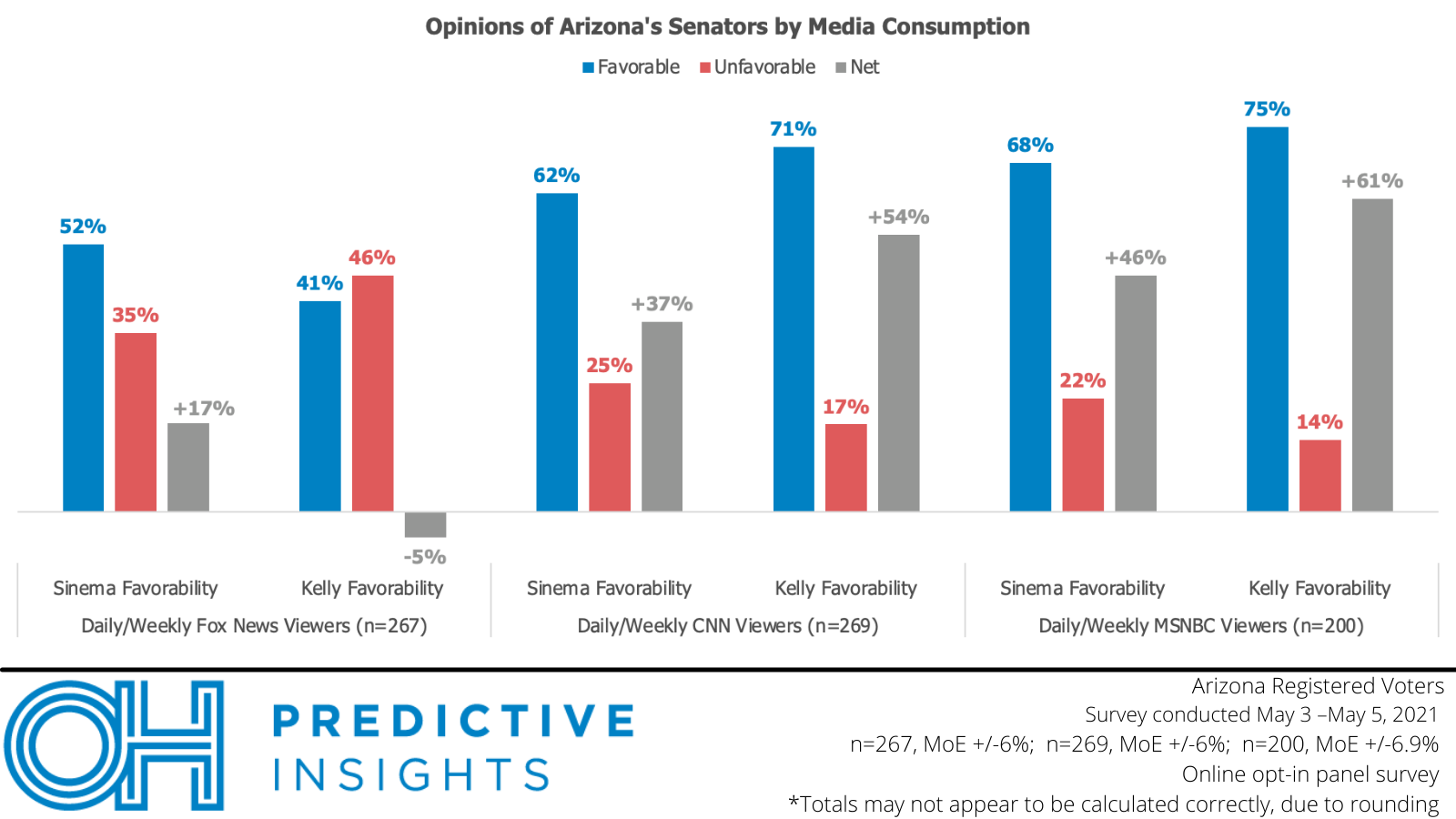 As the intensity surrounding Sinema’s minimum wage downvote begins to dissipate, gaps in the favorabilities of the two Arizona Senators seem to form within the top issues of the State. Sen. Sinema is more favored by those who believe immigration is Arizona’s top issue (Sinema: 35%, Kelly: 27%), but Sen. Kelly is preferred by those who say education (Kelly: 57%, Sinema: 52%) or healthcare (Kelly: 56%, Sinema: 47%) are the State’s top issues.

The 2022 Senate election is inching closer and the race for Arizona’s Senate seat is wide open. Kelly is on the ballot again after capturing the final two years of the late Sen. John McCain’s seat. As an incumbent, Kelly is leading all his potential competitors (a good sign for Kelly) but in no matchup does he exceed the 50% mark (a good sign for the GOP). 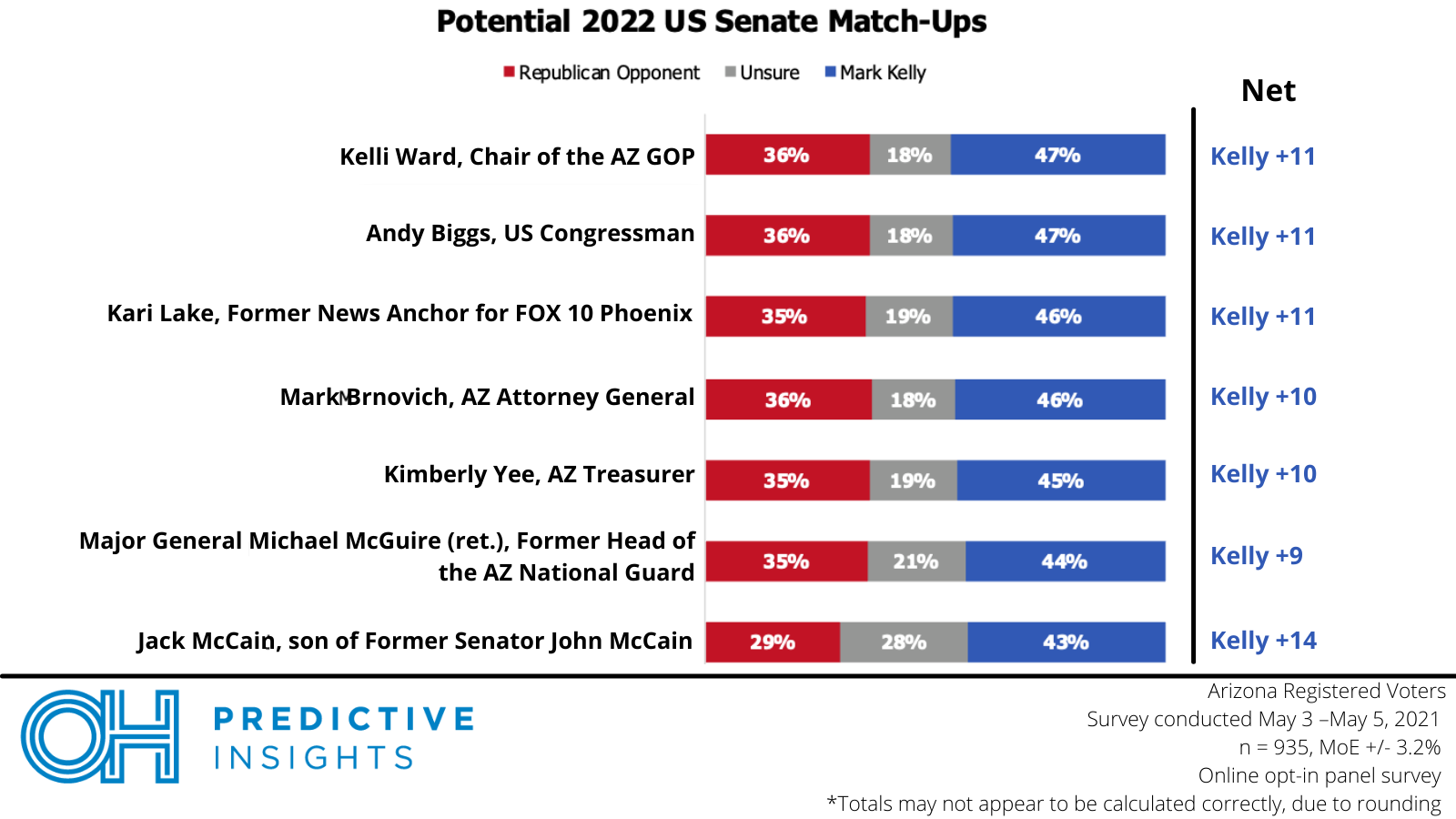 “It’s interesting that Kelly is beating out this broad range of Republicans, but he shouldn’t get too comfortable,” said OHPI Chief of Research Mike Noble. “He’s still vulnerable below the all-important 50% threshold, meaning Arizona’s upcoming Senate seat is still up for grabs.”

Digging into the all-important groups of Independents and Hispanic/Latino voters, Mark Kelly holds the lead against all his potential opponents by at least 9 points. Kelly’s advantage among these key groups is a significant factor for the progression of the upcoming race; the oft-overlooked groups of Independents and Hispanics/Latinos have proven to be among the most influential and growing groups of voters in recent elections.

According to the April 2021 State of Arizona Voter Registration Report from the Arizona Secretary of State, there are now more Independent (labeled “Other”) registered voters than there are Democrats in Arizona. Capturing the favor of these indispensable voters will be the key to crossing the finish line in the 2022 Senate race.

Methodology: This poll was conducted as an online opt-in panel survey. The survey was completed by OH Predictive Insights from May 3rd to May 5th, 2021, from an Arizona Statewide Registered Voter sample. The sample demographics were weighted to accurately reflect gender, region, age, party affiliation, ethnicity, and education. The sample size was 935 registered voters, with an MoE of ± 3.2%. Numbers may not equal 100% due to rounding.