PHOENIX (January 23, 2023)- Midterms may be over, but OH Predictive Insights’ (OHPI) is already curious to discover voter sentiment for the 2024 Presidential Primaries, and what better place to start than in ruby-red Utah. In the first of four quarterly surveys in 2023, OHPI’s Utah Public Opinion Pulse (UTPOP) took an early temperature check on Utah Republican voters’ preferences for the 2024 GOP presidential bid in order to track the movement of voter sentiment as the year progresses. According to the survey, Utah Republicans currently have former President Donald Trump and Florida Governor Ron DeSantis at the top of their list for the 2024 GOP Presidential nominee.

Utah Republican voters were given a list of potential Republican candidates and asked which one they would be most likely to vote for the presidential bid in the 2024 GOP Primary. Of the twelve names offered, Donald Trump (42%) and Ron DeSantis (29%) beat out all other options by a landslide. The only other potential nominee to reach double-digit support was former Vice President Mike Pence at 11%. 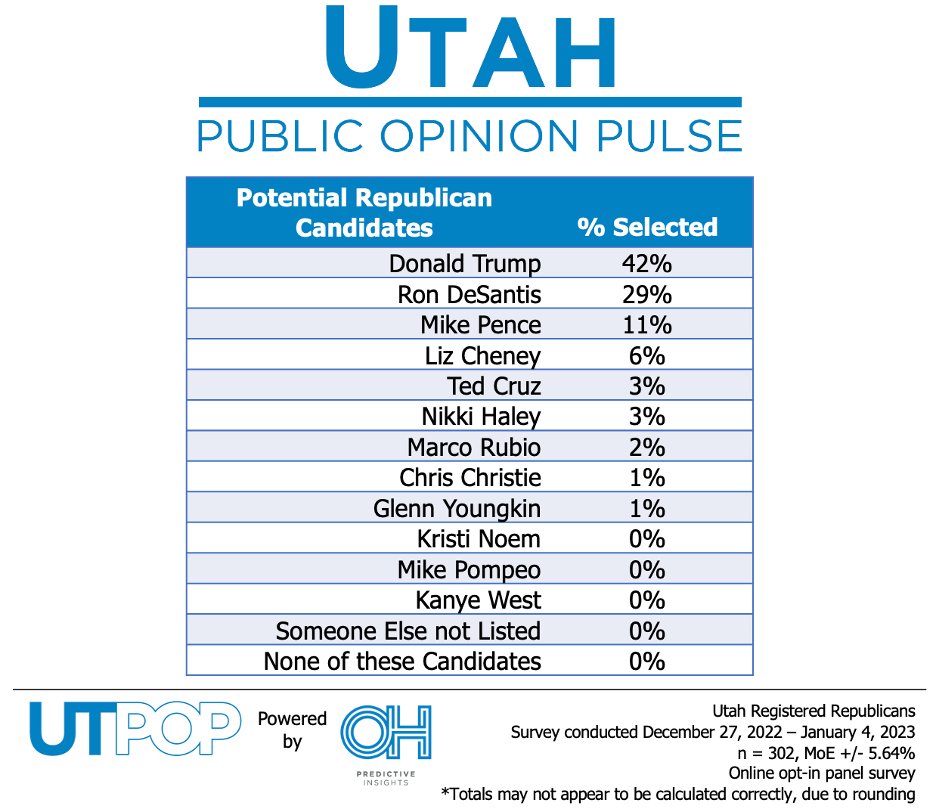 “Among the likely suspects to run for president, it’s clear that anyone not named DeSantis or Trump will have an uphill battle to gain traction,” said Mike Noble, OHPI Chief of Research.  “Currently, Trump holds the high ground over DeSantis amongst Utah Republicans; however, much can change from now until then as the race heats up.”

Trump out-performs DeSantis by 24 points among 18-54 YO Utah Republicans and DeSantis holds a 5-point advantage over Trump with the 55+ YO’s.  Trump also does comparatively better than DeSantis with Female Republicans by a staggering 29 points and is lagging with Male Republicans by 5 points. 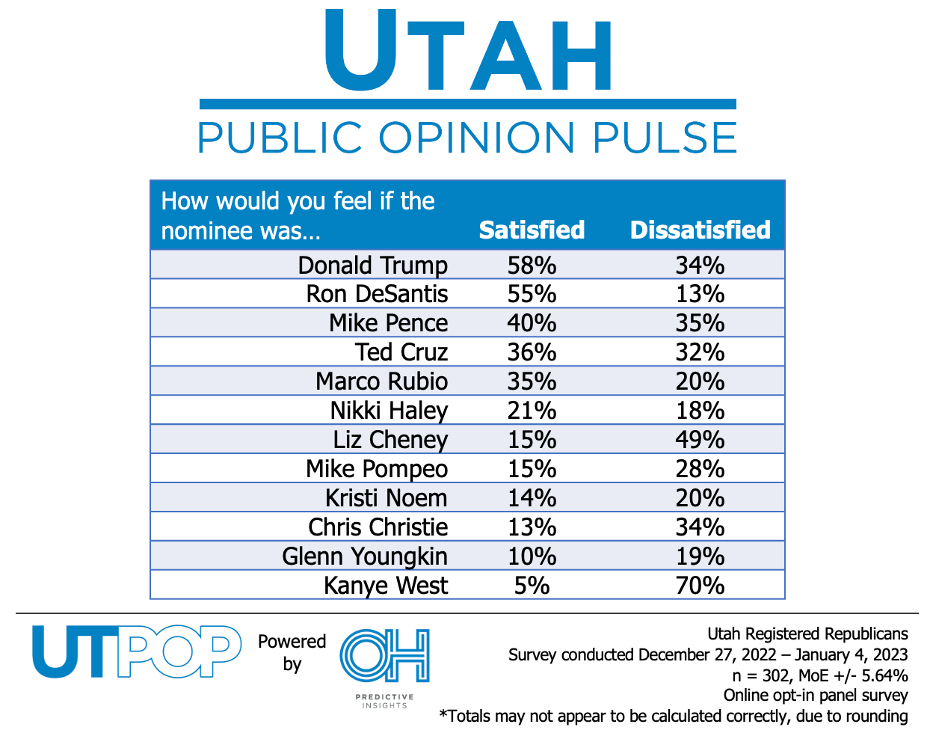 Opinions continue to be split among most other potential nominees. Among Republican figures with more than half of respondents having an opinion one way or the other, Liz Cheney braves a 3:1 dissatisfied to satisfied margin, and Kanye West holds the bottom of the list with 70% of Utah Republican voters dissatisfied with the hypothetical West nomination.

Methodology: This poll was conducted as an online opt-in panel survey. The survey was completed by O.H. Predictive Insights from December 27th, 2022 – January 4th, 2023 from a Utah Statewide Registered Voter sample. The sample demographics were weighted to accurately reflect gender, region, age, party affiliation, ethnicity, and education. The sample size was 600 completed surveys, with a MoE of ± 4.0%. Among the 600 voters surveyed, 302 were Utah Registered Republicans, yielding a MoE of +/- 5.64% with this group. Numbers may not equal 100% due to rounding.

About the UTPOP: The Utah Public Opinion Pulse (UTPOP) survey is a statewide survey of a base sample of 600 – 800 general population state residents (18+ YO) with a statistically significant sample size of registered and likely voters included. Deploying surveys on a quarterly basis, we are able to gauge and keep an accurate and consistent pulse on the perceptions, opinions, and future decisions of state residents on a number of relevant issues and pressing topics for corporate and political insights. With statewide Public Opinion Pulses also conducted in Nevada and Arizona in addition to Utah, our surveys allow data-seekers to look through the 3 unique lenses of general population residents, registered voters, and likely voters in each state for insights most relevant to them. To learn more about our statewide public opinion surveys and for information on how to purchase customized questions to add to our surveys, click here.