PHOENIX (October 18th, 2022)- With less than a month away from General Elections in the Beehive State, questions are buzzing as to who will claim victory in the U.S. Senate and State Treasurer race. OH Predictive Insights’ (OHPI) latest Utah Public Opinion Pulse (UTPOP) revealed that Mike Lee holds a large lead over his opponents in the Senate race while a majority of voters are undecided in the Treasurer’s race.

According to the recent survey, Republican candidate Mike Lee leads the race with 47% support among likely voters. Fifteen points behind Lee is Evan McMullin, an unaffiliated candidate, at 32%. Libertarian candidate James Arthur Hansen and Independent American candidate Tommy Williams trail far behind with less than 5% support each. 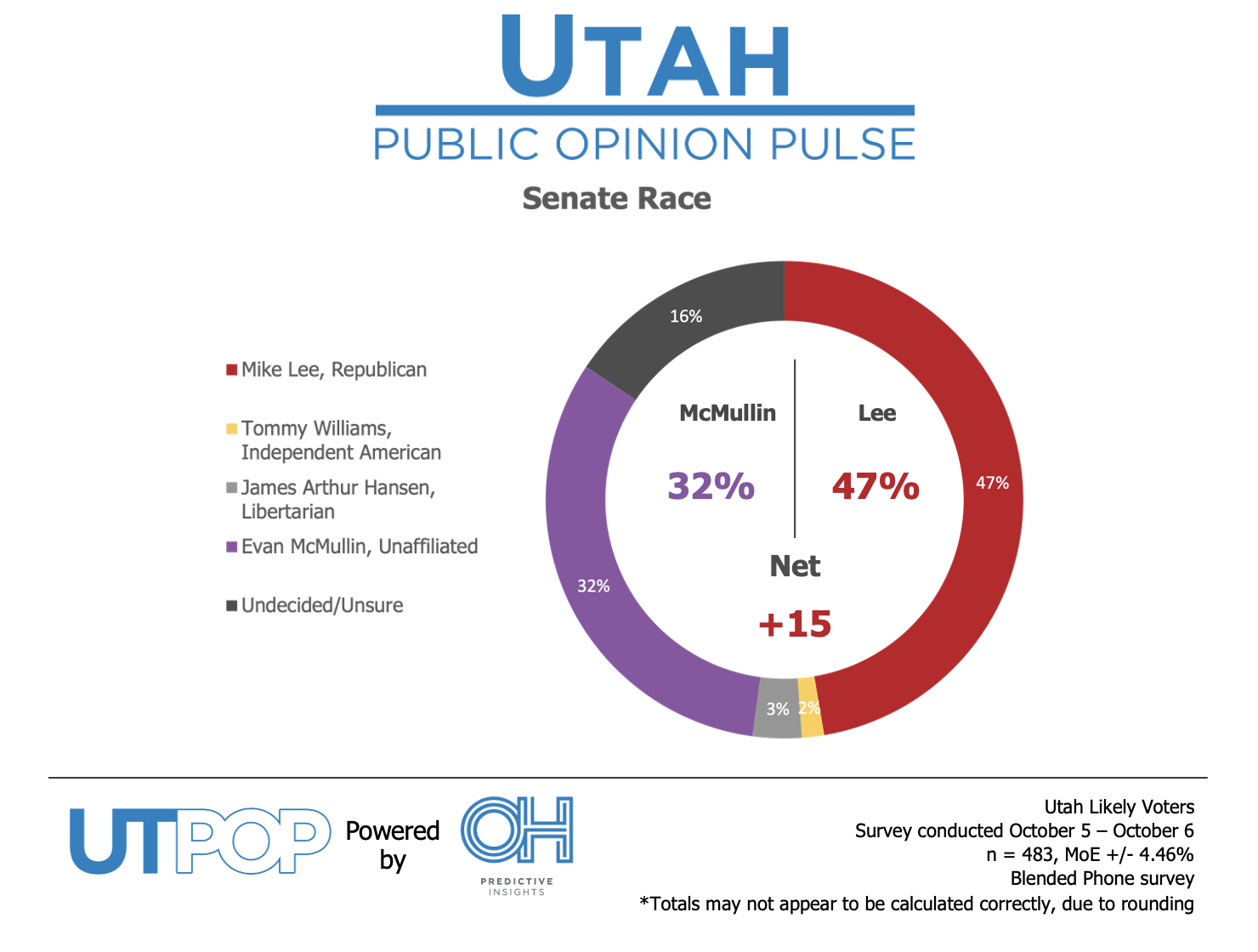 “Lee is getting close to that coveted 50% threshold, and with more than two candidates on the ballot, he could be well on the verge of victory,” said Mike Noble, OHPI Chief of Research.

Taking a look at party affiliation support, Lee holds the reigns on Republican support at 64% while McMullin has a hold on support among Democrats (70%) and Independents (44%). Hansen and Williams struggle to surpass 5% support across all parties. Democrats in Utah make up about 14% of the electorate, so this survey’s reflective sample of Utah's likely Democrat voters (63) is directional.

A key takeaway is that, although Democrats and Independents are showing their highest support for McMullin, both parties have more than 20% of voters who are undecided.

“With no Democratic candidate in the running, it isn’t surprising to see such a high volume of undecideds within the perspective party,” said Noble. “However, it will be interesting to see which way those undecideds swing come Election Day."

Among Key demographics in Utah, Lee holds a monopoly among gender, region, and age. The only groups with statistically tied support are females, voters living in Salt Lake County and North Rural areas, and those ages 35-44 years old.

In the race for Utah State Treasurer, 6 in 10 likely voters are undecided. Republican candidate, Mario M. Oaks, has 28% support while the other three candidates struggle to reach double-digit support. 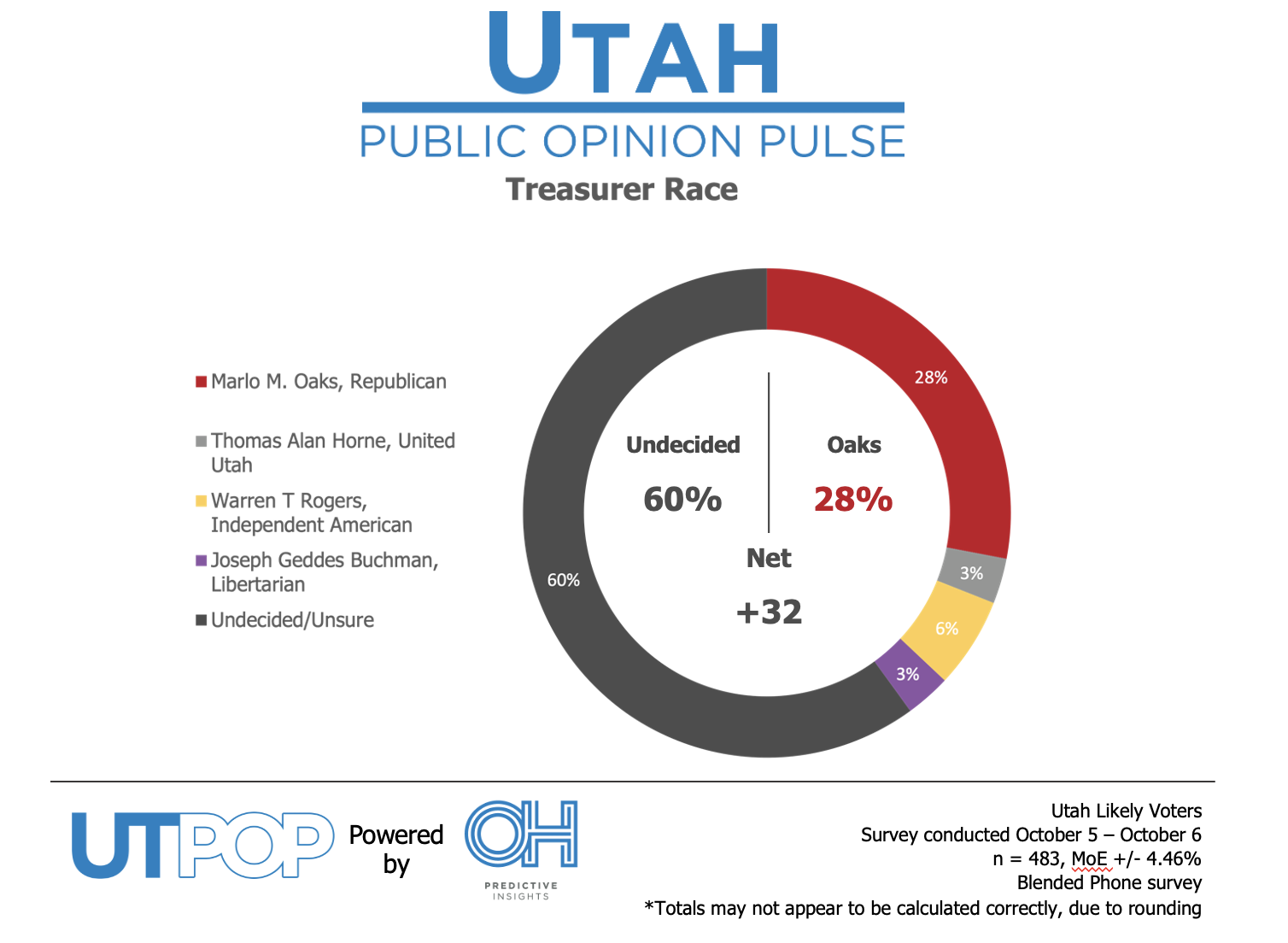 “Oaks is the only candidate with any real traction, but with 60% of voters undecided in this race, your guess is as good as ours,” said Noble. “However, even Utahns know that the odds of a non-GOP candidate claiming victory are slim-to-none.”

Undecided voters also take the lead across all party affiliations and key demographics, except voters ages 65+ years old, who have Oaks at 43%. Among Republicans, although half are undecided, it is important to note that Oaks has 40% support, which is the highest amount of support among any candidate.

Methodology: This poll was conducted as a blended phone utilizing Peer-to-Peer Text and IVR. The survey was completed by OH Predictive Insights from October 5th to October 6th, 2022, from a Utah Statewide Likely Voter sample. The sample demographics were weighted to reflect expected turnout among Utah likely voter population by gender, region, age, party affiliation, ethnicity, and educational attainment according to voter statistics derived from the Utah Lt. Governor’s Office and recent Census data. The sample size was 483 completed surveys, with a MoE of ± 4.46%. Totals may not sum to 100%, due to rounding.