Majority of Utah Voters Say Trump Should Not Run in 2024

PHOENIX (December 8th, 2021)- As President Joe Biden suffers his lowest ratings since taking office, Utah Republicans seem to be the only party in the state turning their attention to former President Donald Trump this far ahead of the next presidential election. According to the latest Utah Public Opinion Pulse (UTPOP) survey conducted by OH Predictive Insights (OHPI), more than half (54%) of Utah’s electorate does not want to see Trump run again in 2024. 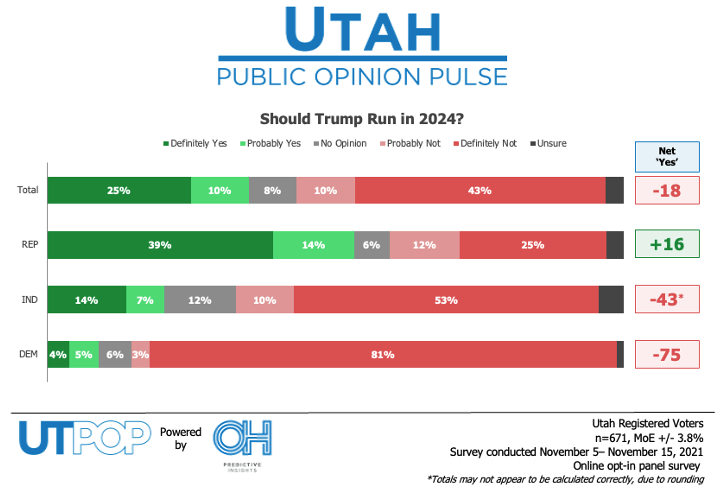 Voters who want to see a ‘Trump comeback’ in 2024 tend to be younger, particularly among Utah Republicans. Among all Utah voters, only 23% of 55+ year-olds think that Trump should run again, compared to 41% of 18–54-year-olds. Looking specifically at Utah GOP voters, 38% of 55+ year-old Republicans think Trump should run again, compared to 62% of 18-54-year-olds in the party. There is also a split in opinion among Utah Republicans by religious affiliation. According to the survey, 46% of Republicans who are members of the Church of Jesus Christ of Latter-Day Saints (LDS) think Trump should run in 2024 while two thirds (67%) of non-LDS Republicans want to see him run again. In fact, despite 67% of self-identified LDS voters in the survey reporting being registered Republicans and just 6% being registered Democrats, only 38% of Utah’s LDS voters in total want Trump to run again, while half (50%) do not.

“Even in a state that former President Trump won in the 2020 election, a majority of Utah’s electorate isn’t interested in a ‘Trump comeback,’” said Mike Noble, OHPI Chief of Research. “With only a fifth of Independents and even fewer Democrats wanting Trump to run again, he may not be a viable candidate in the Beehive State next time around.” 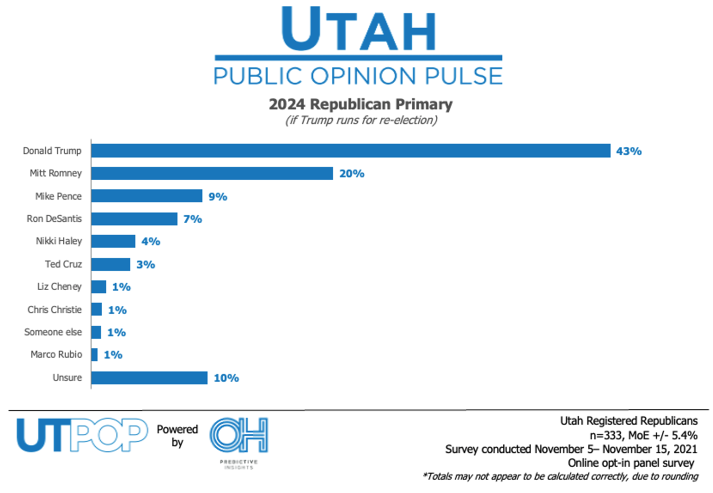 If Donald Trump does not run again in 2024, Mitt Romney (21%) and Ron DeSantis (18%) statistically tie for the lead. Mike Pence trails in third place at 13% while no other potential candidate cracks double digits – including Donald Trump Jr. In the eyes of Utah Republicans, the younger Trump would not be a suitable replacement for his father should the former president decide against another White House run. According to the survey, Trump Jr. sits at 8%.

“Without the former president on the ballot, however, the 2024 GOP Primary becomes a whole to more interesting,” said Noble.

The share of those unsure whom to support more-than doubles from 10% Unsure with Trump on the ballot to 23% Unsure without him.

Methodology: This poll was conducted as an online opt-in panel survey. The survey was completed by OH Predictive Insights from November 5th – November 15th, 2021, from a Utah Statewide Registered Voter sample. The sample demographics were weighted to accurately reflect gender, region, age, party affiliation, ethnicity, and education. The sample size was 671 completed surveys, with a MoE of ± 3.8%. The sample of registered voters also contained a subsample of 333 respondents who self-identified as being registered members of the Republican party. This subsample has a MoE +/- 5.4%. Numbers may not equal 100% due to rounding.