Voting Impact of Supreme Court Ruling on Abortion in Arizona

Voting Impact of Supreme Court Ruling on Abortion in Arizona


PHOENIX (July 25th, 2022)- With just a little over a week until the Primary Election, one of the looming questions is, will the overturn of Roe V. Wade come into play when voters make their decision on a candidate at the ballot box? OH Predictive Insights (OHPI) conducted a survey to assess Arizona voters’ sentiment toward the Supreme Court ruling. According to the latest Arizona Public Opinion Pulse (AZPOP) survey, 52% of registered voters in Arizona oppose the Supreme Court overturning Roe v. Wade.

Support for the Supreme Court Ruling

A majority of Arizonans (52%) oppose the US Supreme Court’s ruling in Dobbs v. Jackson Women's Health Clinic, in which the precedent of Roe v. Wade was overturned. One in three voters supports the overturn, while 16% have no opinion on the matter. 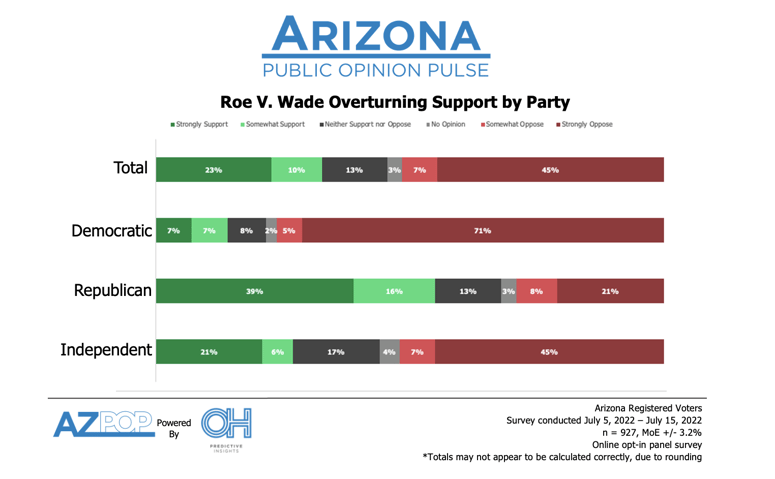 In regard to whether the overturning of Roe v. Wade will impact voting, 47% of registered voters say they are more likely to vote after learning of the outcome of overturning Roe v. Wade.

On one hand, Democrats expressed a higher likelihood to vote since the Supreme Court decision, while on the other hand, Independents revealed less motivation, which is the group who will ultimately have the say at the ballot box come November. 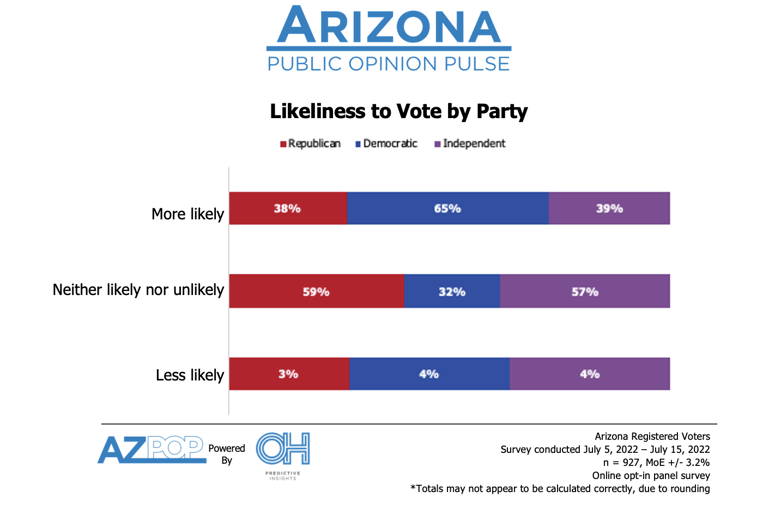 “Candidates who can sift through the louder sentiments to leverage an actionable abortion messaging strategy will have the advantage going into November,” said Mike Noble, OHPI Chief of Research.

Taking a closer look into the party breakdown, GOP voters who classify themselves as supporters of Trump responded that they are more likely to vote based on abortion (48%) at a higher rate than voters who are supporters of the Republican party (31%).

About 3 in 5 registered voters (64%) view a candidate’s position on abortion as impactful in their choice as to whom to vote for. Pro-choice voters are generally more motivated to choose a candidate based on their abortion stance.

Now that Roe v. Wade is no longer a precedent, the latest survey aimed to gauge the support/opposition of the territorial law put in place by the Arizona Attorney General’s office just days after the Supreme Court effectively overturned Roe v. Wade. The territorial law was created in 1864 to criminalize abortions for both the recipients and providers. Only 28% of respondents support this law, while a majority (52%) oppose it.

“In a post-Roe America, abortion will continue to play an outsized role in Arizona's political discourse,” said Noble. “While most Arizonans oppose the overturning of Roe v. Wade, voters on both sides of the spectrum are using abortion as a catalyst to generate support. “

Methodology: This poll was conducted as an online opt-in panel survey. The survey was completed by OH Predictive Insights from July 5th to July 15th, 2022 from an Arizona Statewide Registered Voter sample. The sample demographics were weighted to accurately reflect the registered voter population by gender, region, age, party affiliation, ethnicity, and education according to a recent voter file derived from the Arizona Secretary of State’s Office and recent Census data. The sample size was 927 registered voters in Arizona, with an MoE of ± 3.22%. Numbers may not equal 100% due to rounding.